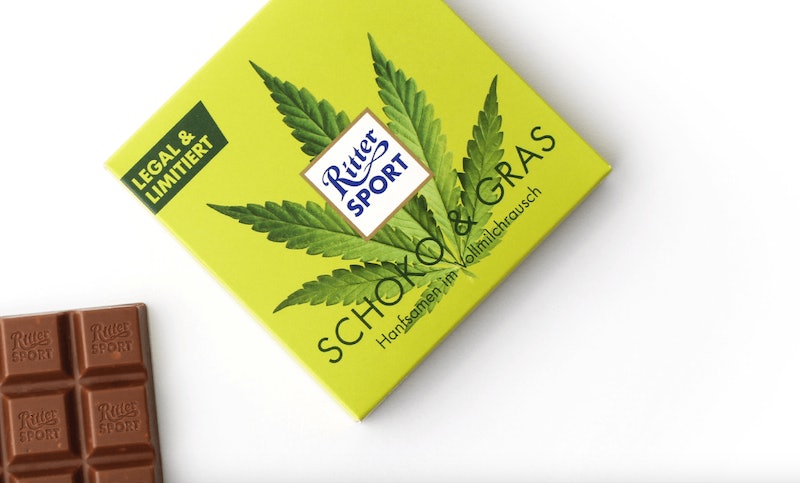 If there’s anything people love more than chocolate, it’s chocolate that is also attached to some kind of gimmick. Gimme those gimmicky chocolates. In honor of 4/20 (AKA the weed holiday), German-based confectionary brand Ritter Sport sold limited-edition “Schoko & Gras” chocolate bars. For those not versed in German, that translates to “Chocolate and Grass.” For those not verse in weed, “grass” means “weed.”

The special edition chocolate bars came packaged in bright green wrapping and featured an image of a marijuana leaf. The concept clearly was not meant to be subtle. Each bar incorporated roasted organic hemp seeds into the delicious chocolate, making the cross-section look kind of like Hershey’s Krackel bars but sub hemp seeds for the crispy rice.

The campaign touted included hemp seeds as a “superfood.” (And, depending on who you ask, chocolate itself has some surprising health benefits.) Additionally, Elbkind, the German marketing agency behind the social media campaign, said in a press release that the limited-edition bar was meant to incite an “unbiased discussion on hemp.”

Disclaimer: Hemp, though made from the cannabis plant, does not get you high. As the Schoko & Gras packaging stated, the product is legal everywhere, regardless of marijuana laws, and doesn’t include THC. However, it’s definitely an ideal snack when you have munchies.

“This is a great example of an enlightened major player who understands the potential for hemp in foods,” Daniel Kruse, the CEO of Hempro Int. which provided the hemp seeds for the bars, said, according to Hemp Today.

The Schoko & Gras bars were available for purchase online or at stores in Berlin and Waldenbuch, where Ritter Sport is headquartered. However, emphasis on the were in that statement. As per a translation of a post on Ritter Sport’s blog the bars sold out online around noon on April 22 and in stores on April 23. I repeat, people are into their gimmicky chocolate, especially when you slap something about weed on it.

Unfortunately, it doesn’t look like Ritter Sport has any intention of restocking the limited-edition chocolate.

Ritter Sport is not the first company to dip their toe in cannabis culture. Recently, The Standard Hotel in the U.S. started offering CBD-infused gummies in their hotel mini bars. While the gummies, produced by cannabis company Lord Jones, are infused with THC, the mini bar selection also included a non-THC infused lotion as well. The body lotion, as per the Lord Jones product page, is perfect for “sore muscles, joint pain and skin conditions.”

Pair that with Ritter Sport’s bar of chocolate and something to binge-watch on Netflix and you’ve got yourself a solid night in.

In the United States, the legalization and decriminalization of marijuana matters beyond kitschy chocolate: it’s also a racial equality issue. When it comes to drug-related offenses, black people are incarcerated at higher rates and for longer sentences than white people despite actual drug use being comparable among both races. Analyses show that drug laws disproportionately target people of color, a problem that still persists despite the legalization of weed passing in more and more states.

“As white people exploit the changing tide on marijuana, the racism that drove its prohibition is ignored,” Vincent M. Southerland, executive director of NYU Law’s Center on Race, Inequality and the Law, and Johanna B. Steinberg, director of Bronx Defenders, wrote for the New York Times. “So are the consequences for black communities, where the war on drugs is most heavily waged.”

In addition to the economic arguments for weed legalization — if Ritter Sport’s limited edition bars selling out is any indication, there is certainly a market demand — it’s important to keep in mind the arguments that prioritize racial justice and how legalization should benefit everyone.