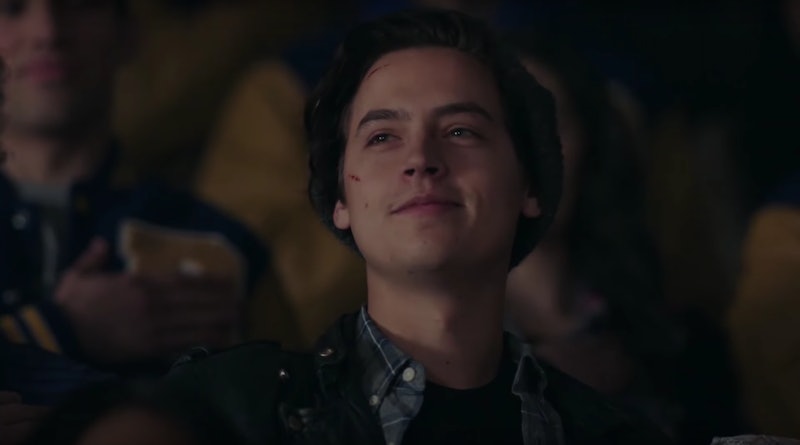 The town of Riverdale is about to get a couple new residents. As revealed at the New York Comic Con on Sunday, Oct. 7, Gina Gershon and Trinity Likins are joining Riverdale Season 3 as Jughead Jones' mother and sister, Jelly Bean. The expansion of Jughead's family has been a long time coming, and will no doubt add more backstory to the fan favorite character.

According to a press release from The CW, Gershon will play Gladys Jones, Jughead's oft-mentioned mother. She's described as a businesswoman and biker who who runs a salvage yard that doubles as a Southside Serpent compound. It seems that Gladys will be catch the attention of certain members of the gang as she takes on the role of leader to a crew of teenage car part thieves. It's not yet clear what kind of relationship Jughead will have with his newly introduced mother, but it sounds like her presence could mean trouble.

The Jones' matriarch isn't the only addition to the family. Likins will appear as Jughead's sister, Jellybean "JB" Jones. The character is described as being "wise beyond her years," and her favorite bands are Pink Floyd and Black Sabbath. She will also potentially be up to no good in Riverdale, as she's reportedly following in her mother's footsteps as a con-artist. The CW revealed that Jellybean and Gladys have been living in Toledo, Ohio, where they ran scams to make ends meet. According to Entertainment Weekly, their arrival in town is sure to rattle Jughead, as well as his father FP Jones, who will struggle with no longer being the head of the Southside Serpents.

The third season of Riverdale premieres on Oct. 10, but Gladys and Jellybean will first appear in the Dec. 12 episode. It might be bad news for the relationship between Jughead and Betty, as the character's mother will clearly have a strong personality. During the NYCC panel, the cast didn't speak to this interaction specifically, but Lili Reinhart, who plays Betty, promised plenty of drama in the new season, according to EW. "I think I would describe the main mystery in the first half of the season as there's sort of an epidemic in Riverdale," she said. "It involves everyone in the town and it's kind of a crisis."

With Gershon and Likins set to join around the time of the midseason finale, the new additions to the cast should fit right in. Fans will likely recognize Gershon, a longtime stage, film, and television actor who has appeared in FX's Rescue Me, HBO's Curb Your Enthusiasm, and Amazon's Red Oaks. She's also appeared in several movies, including Bound and The Player. Likins is more of a newcomer to television. Still, she's taken on several roles in the past, including Hallmark holiday movie Christmas in the Air and a recurring role on CBC's Unspeakable.

According to EW, Riverdale creator Roberto Aguirre-Sacasa also revealed at NYCC that Gershon already filmed her first scenes with KJ Apa, Sprouse, and Skeet Ulrich, who plays KP Jones, during the show's panel. During the same panel, Aguirre-Sacasa also confirmed that Reinhart would be filming scenes with the new cast members. This means that there might be problems in store for the Bughead, but Reinhart said the high school couple would be going strong at the season's start. "So far so good," she told the audience.

It's not yet clear what kind of trouble Jughead's new con-artist family members will mean for the character and the town, but they are definitely bringing intrigue to the new season. It's just one of the many details fans will have to wait to see play out in the new season.