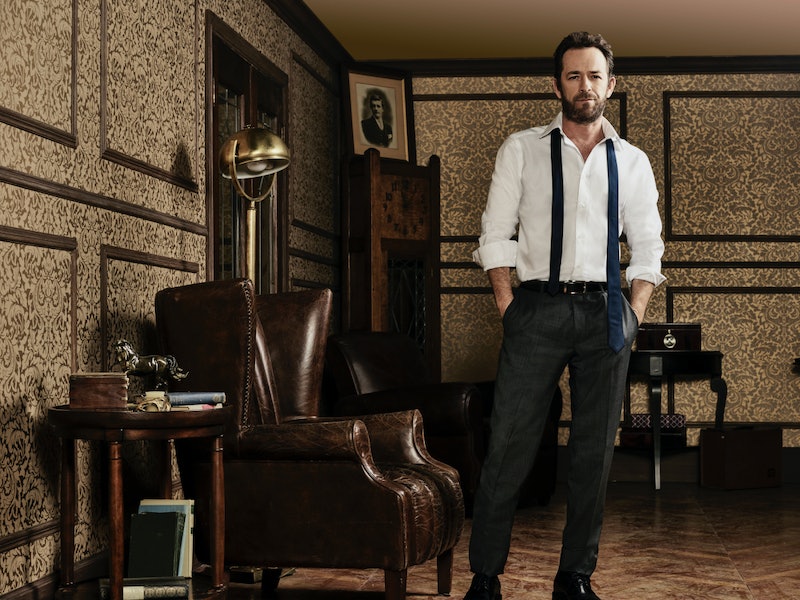 In case there was any remaining doubt in your mind about how much Luke Perry was loved by his Riverdale family, the cast and crew are choosing to pay homage to his memory in the sweetest tribute imaginable. Going forward, Riverdale is dedicating every upcoming episode to Perry, according to a tweet from Riverdale creator Roberto Aguirre-Sacasa. And fans everywhere will agree that it is a great way to honor Perry's passing and demonstrate just how much he meant to all of those who work on Riverdale. (Bustle reached out to a rep for Riverdale asking to clarify if this means there will be a dedication to Luke Perry at the end of every single episode, but had yet to hear back at the time of publication.)

The news was announced on Wednesday, March 6, in a tweet that also confirmed that Perry's character, Fred Andrews, will appear in this week's episode. "Going through pictures on my way to set. From the early days. With Luke in the middle. Our heart, always," Aguirre-Sacasa wrote on Twitter along with a throwback photo of the Riverdale cast, which included Perry, Lili Reinhart, Madelaine Petsch, and several others. "Tonight’s episode of #Riverdale finds Fred doing what he does best--helping Archie. It is dedicated to Luke, as all episodes will be for the rest of our run. 💔❤️🏆."

Perry's death was confirmed by his rep on Monday, March 4, after the actor had suffered a massive stroke last week. Since then, Riverdale production has been shut down while the cast and crew mourn his loss. Aguirre-Sacasa, along with the show's other executive producers, also released a statement about Perry's death shortly thereafter, as per Variety, stating:

"We are deeply saddened to learn today about the passing of Luke Perry. A beloved member of the Riverdale, Warner Bros. and CW family, Luke was everything you would hope he would be: an incredibly caring, consummate professional with a giant heart, and a true friend to all. A father figure and mentor to the show’s young cast, Luke was incredibly generous, and he infused the set with love and kindness. Our thoughts are with Luke’s family during this most difficult time."

Additionally, Aguirre-Sacasa wrote his own separate tribute to Perry, which he posted on Twitter. "So heartbroken about Luke. He was a father, brother, friend, and mentor," Aguirre-Sacasa wrote. "Each night before he had to shoot a scene, he’d call me and we’d talk about...everything. I will miss those calls. And my heart goes out to all his family and friends. 💔"

These are just a mere few examples of all the kind messages and tributes that have been dedicated to Perry's memory throughout the last few days. From his Riverdale comrades to his Beverly Hills, 90210 co-stars, his passing has been met with messages of love and support for all those who were lucky to know him. It's difficult to find a genuine, good-natured soul within Hollywood these days, but, based on these stories, Perry certainly was that and so much more.

So when you tune in to watch Riverdale, be on the lookout for the show's heartfelt dedication, and take comfort in knowing how much he was truly loved.