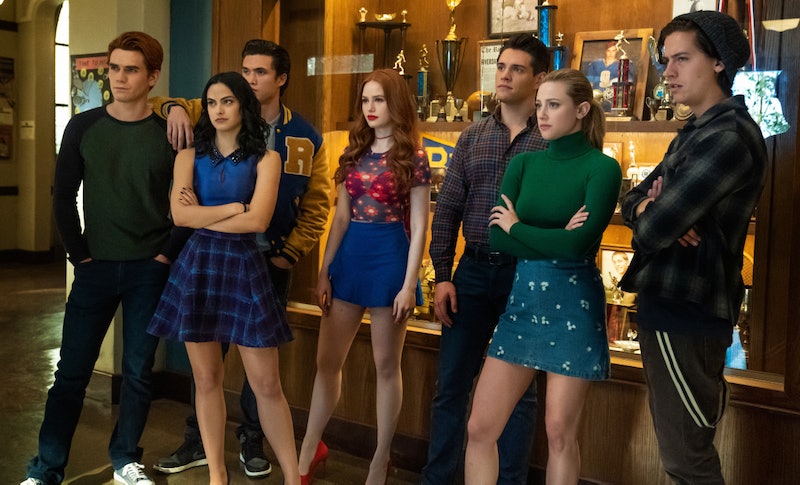 If you've fallen behind on Riverdale, good news: Season 4 will be on Netflix very, very soon. The company confirmed on Twitter that Season 4 will be available to stream beginning May 14, just a week after the impromptu Season 4 finale.

The catch? It will have to hold you over for a while. Season 4 was initially intended to have 22 episodes, but is now ending early with Episode 19 due to production shutdowns amid the coronavirus pandemic. The remaining three episodes will instead be incorporated into Season 5, Riverdale writer Ted Sullivan revealed on Twitter. As of now, it's unclear when Riverdale — or any show — will be able to resume filming, or when it might be back onscreen after that. A new season of Riverdale has debuted every October like clockwork since the series' 2017 premiere, but the pandemic may push things back.

That being said, there's a lot to look forward to in Season 4, whether you're catching up or rewatching it all over again: Fred Andrews' sad but touching send-off following actor Luke Perry's untimely death; the ominous flash-forwards to Jughead's supposed murder; the new VHS tape mystery; and even a rekindled Barchie romance.

Those storylines will only continue to build in Season 5, which was meant to include a time jump that showed "where everybody had landed" after graduating high school, star Mädchen Amick (Alice Cooper) told Entertainment Weekly, noting things may change slightly due to the shortened season. And as far as Betty and Archie, there may be even more to come. "I think Roberto loves to torture the fans, quite frankly," Amick said. "That's the fun dynamic, and that is what's classic to the Archie Comics, is you have this love triangle that's always been between Archie, Betty, Veronica, and now we've thrown in Jughead into the mix. It's complicated, but we'll see what ends up happening at the end of senior year and where relationships really go."

Furthermore, while Skeet Ulrich and Marisol Nichols (who play FP Jones and Hermione Lodge, respectively), won't be returning next season, they may pop up again in the future. "[Riverdale showrunner Roberto Aguirre-Sacasa] told me he hopes their characters can come and go from the show depending on everyone's availability," Amick told EW. "It's always funny whenever some of our characters die on the show, it's like, 'Oh, well that guarantees you'll be on more often.' Nobody's ever really gone on Riverdale."

Especially when you can just rewatch old seasons on Netflix.

More like this
Netflix Shut Down 'Bridgerton' S3 Rumours About A “Very Dark” Storyline
By Bustle
Here’s Everything Coming To & Leaving Netflix In February
By Jake Viswanath
The 'Freeridge' Cast Shared Their Hopes For A Potential Season 2
By Grace Wehniainen
Everything To Know About A Potential 'Lockwood & Co.' Season 2
By Gretchen Smail
Get Even More From Bustle — Sign Up For The Newsletter
From hair trends to relationship advice, our daily newsletter has everything you need to sound like a person who’s on TikTok, even if you aren’t.