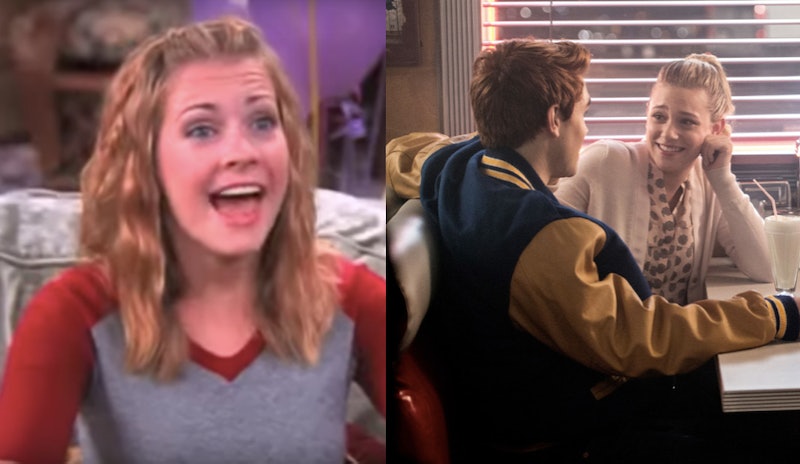 If you're a Riverdale fan, you should be very excited to hear Sabrina The Teenage Witch is getting a dark reboot. Mainly, because the Sabrina revival, which may or may not include Melissa Joan Hart, will be created by the showrunners of Riverdale. But also because Sabrina Spellman actually got her start in the Archie comics.

Yes, before Sabrina went her own witchy way, she was hanging out in Riverdale with Archie, Jughead, Veronica, and Betty. Sabrina, who is half-witch, made her first appearance in the 1968 comic, Archie's Madhouse #22, as Archie's neighbor. The new CW series will be called The Chilling Adventures Of Sabrina, according to E! News, and will be based on the comic book series of the same name. Unlike the sweeter adventures of Sabrina where she tried to hide her magic from the world, her Chilling Adventures are just that.

In this comic book series, which began in 2014 and is set in the '60s is written by Riverdale showrunner Roberto Aguirre-Sacasa, Sabrina is living one town over in Greendale with her aunts Hilda and Zelda, along with her cousin Ambrose, and she's facing a very serious question as she nears her sweet 16: Should she remain a witch or become mortal forever? Oh, and to make matters worse, Sabrina's father's ex is trying to exact revenge on her and the rest of the Spellman family.

Keeping with that spooky theme, the one-hour reboot will be way more dramatic than the Sabrina The Teenage Witch of the '90s. Just like Archie in Season 2 of Riverdale, Sabrina's getting very dark in this one-hour drama slated to premiere in 2018 or 2019. E! reported that the tone of the show will echo Rosemary's Baby and The Exorcist, so expect things to get scary. Maybe don't expect to see her cute cat Salem talking in this version.

According to CW, The Chilling Adventures Of Sabrina will be a "dark coming-of-age story that traffics in horror, the occult and, of course, witchcraft." In this adaptation Sabrina will be "wrestling to reconcile her dual nature — half-witch, half-mortal — while standing against the evil forces that threaten her, her family and the daylight world humans inhabit." Basically, it sounds amazing.

While the details of the new Sabrina series are few and far between, some fans believe the role of Sabrina has already been cast. Earlier this month, Disney Channel star Dove Cameron posted a shot of a Sabrina comic book page with the teen witch saying, "No, we modern witches believe life should be a ball!" The caption was just a telephone emoji, which had some speculating the Liv and Maddie star had gotten a call from the Riverdale showrunner.

Both Cameron and Aguirre-Sacasa have been quiet about the casting. Aguirre-Sacasa even teased that Sabrina could show up in Riverdale in Season 2, but it would have to be done the right way. "I think it's a big thing to introduce the supernatural into a naturalistic world," he told Entertainment Weekly. "We want to be really, really careful about how we do it." Whether it's now or later, it's hard to believe there won't be a crossover episode where Sabrina comes to Riverdale to work her magic.

While fans don't know when Sabrina will be in Riverdale, knowing The Chilling Adventures Of Sabrina is a companion to the hit CW show means there will be a whole lot of high school drama to keep you glued to your television, no matter how old you are.

Not to mention, the possibility of seeing an '80s or '90s star playing one of the grown-ups. Riverdale already has 90210's Luke Perry, and everyone's favorite Brat Pack-er Molly Ringwald, so the stakes are high when it comes to casting Sabrina's aunts. Perhaps, Melissa Joan Hart is up for the job?