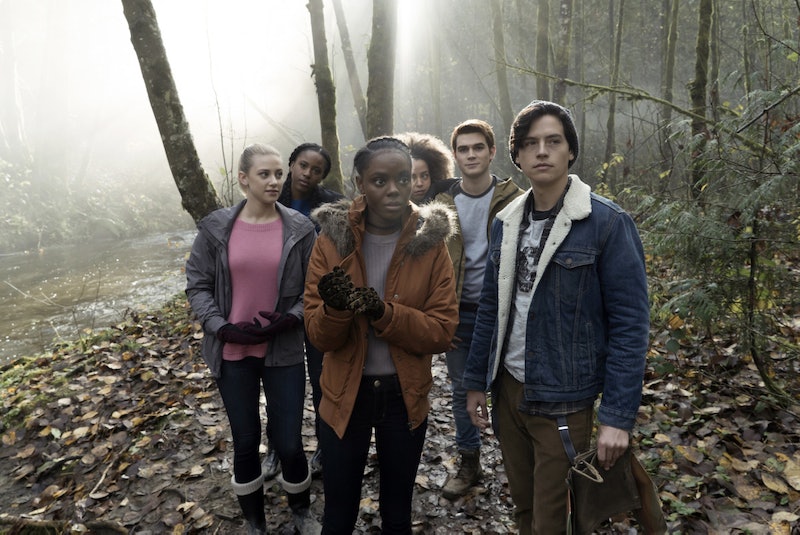 If you were worried Riverdale would attempt to keep Jason Blossom's killer a secret for seasons to come, let Jughead himself assuage your fears. In a recent interview with PopSugar, Cole Sprouse confirmed Riverdale will solve Jason's murder in Season 1. Actually, the show will do more than solve the football star's murder, it will reveal the killer to all the characters involved, as well as the town.

"To answer probably a question that's on a lot of people's minds is: the audience knows, and will know, who the killer is. The town will know who the killer is. And that narrative arc will be resolved season one. So it's not something that's going to span however many seasons; it sees closure."

With the mystery of Jason's untimely demise set to be wrapped by the time Season 1 ends, that leaves Season 2 wide open for new stories to be explored. The smart teen drama isn't going to suddenly devote all of its energy to its various romantic entanglements either. The nostalgic, noir vibe of Riverdale is built into the DNA of the show, guaranteeing Betty, Veronica, Archie, and their friends will never have a normal high school experience — which is excellent news for the fans.

According to Sprouse, the Season 1 finale will set up a new mystery for Season 2, and if previous hints about the direction of the series prove to be true, then Riverdale is only going to get darker. Series creator and Afterlife with Archie comic book writer, Roberto Aguirre-Sacasa, addressed those zombies in Riverdale rumors during an interview with Entertainment Weekly, and while it still seems unlikely Archie will have to face an apocalypse anytime soon, there are some major changes ahead. The Season 1 finale is set to introduce a genre element to the series that Aguirre-Sacasa is sure will take viewers by surprise.

During his interview with EW, Aguirre-Sacasa revealed, "Afterlife or not, there will definitely be a big genre element to season 2. It’s going to make people go, 'They're not really doing that, are they?'" With a certain teenage witch set to potentially appear before the season ends, anything is possible when it comes to Season 2.

As long as Riverdale stays true to its witty, Twin-Peaks-for-teens heart, then I am sure fans will follow the show to whatever dark, new places it has in store. Whether the show introduces a supernatural element, or simply finds a mystery even twistier than the one surrounding Jason's death, there is no way the story will be anything less than addictive. That's just what life is like in the strange town of Riverdale.