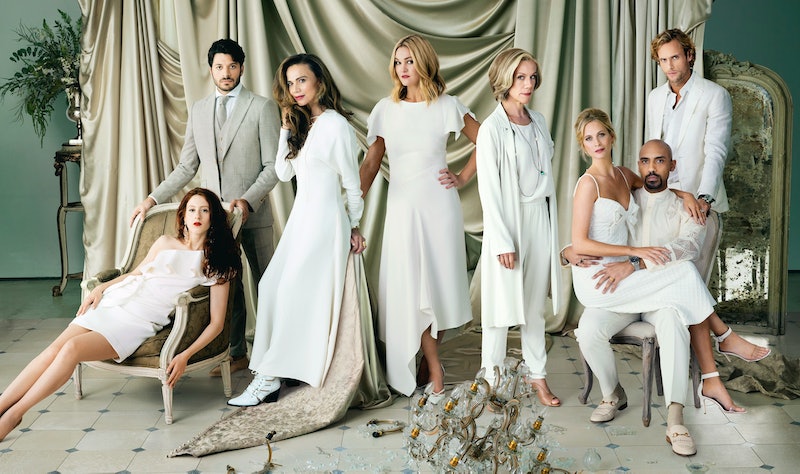 PSA for all Sky Atlantic fans. The Riviera season two start date and first picture have finally been announced, and the new episodes promise more scandal, opulence, and mystery than ever before. Think Dynasty meets Dallas. It's Sky's most successful original series, according to Variety, so it's no surprise that it has been renewed for a second season. Riviera will be available May 23 on Sky Atlantic and NOW TV, so get ready for a marathon.

Sky has released a first look at the new show with a promo photo, and this image alone screams glamour, with the cast serving us some serious side eye. According to Digital Spy, season two will see the principal cast joined by five new faces: Will Arnett as Jeff, Grégory Fitoussi as Noah, Poppy Delevingne as Daphne, Jack Fox as Nico, and Juliet Stevenson as Lady Cassandra. Daphne, Nico, and Lady Cassandra make up the Elthams, Digital Spy reports. Think old English sophistication (and secrecy). The new family on the block are here to shake things up and create rivalry.

This season will see the Clios family continue to mend themselves following the mysterious death the patriarch, Constantine. As Georgina Clios (Julia Stiles, of 10 Things I Hate About You fame) struggles for power and respect in the family, the Elthams arrive on the Cote d'Azur. The Elthams are a dynasty and are not too dissimilar from the Clios', harbouring secrets of their own. Georgina is reunited with her uncle Jeff, played by the ever charming Will Arnett, and the audience are exposed to more secrets about her life back home in America that she tried so hard to bury.

The show itself has a bit of a scandalous origin story, with writer and creator of the show Neil Jordan disowning the series in 2017. According the Guardian, Jordan said: "All I can say is, good luck to them ... I can’t claim it’s mine. If I had been in control of the thing it would have been quite different.” Jordan says that the episodes he wrote were rewritten and so his involvement in the show has been minimal. While the specifics about this situation are not 100 percent clear, it all adds to the intrigue and mystique that is Riviera.

According to Glamour, Julia Stiles said of the new season: “Riviera is not about the male moguls in this world, it’s the women who are driving this show." Can I get an amen? While the plot does centre around the death of the billionaire patriarch, at the heart of it is an exploration of female power.

The setting of Riviera is enough to make anyone green with envy, but, more than the stunning backdrop, it's the characters' fashion sense that I'm so obsessed with. From Celine to Yves Saint Laurent, Glamour reports, all the big fashion houses are here to show us how to really dress for the French Riviera. If this sounds like your cup of tea (or, rather, your glass of champagne), head to Sky to catch up season one before season two hits our screens on May 23.