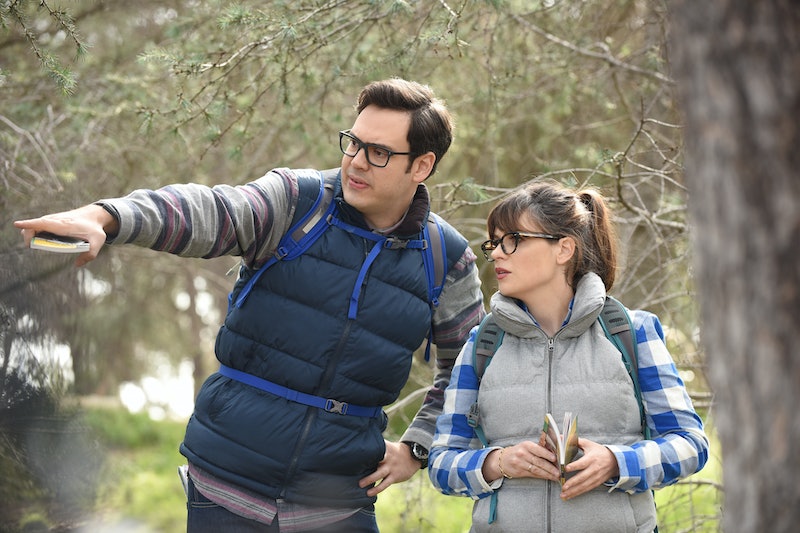 As much as I love her and Nick together, it’s hard to deny that Jess and Robby actually do make a really cute couple on New Girl. I’ll admit it: I was skeptical of them at first, but seeing them together (minus that horrific gym kissing accident) has me convinced that they could actually become one of the show’s central couples. And just when I was finally starting to fall in love with their relationship, it’s over — and for the craziest reason ever. Jess and Robby broke up on New Girl, and it’s all because they are related. Yes, related. And for the record, I definitely didn’t see this one coming.

Because the reason they’re so alike? Yeah, it’s because they share a bloodline. It all started when Jess and Robby decided to go hiking, and the whole thing turned into a total disaster. They got lost, they argued, and they couldn’t even properly share trail mix because they both love the chocolate and the nuts and hate the raisins. Then, a torrential downpour hit, and while they were hiding from the rain, they figured out that they share an uncle, making Jess and Robby third cousins.

And after trading stories from their childhood, they realized that they even interacted as kids at family reunions. Yeah, no thanks.

As you can imagine, it’s pretty impossible to come back from that, so needless to say, Jess and Robby decided to end their relationship right then and there. It was a bummer, but it had to be done — I mean, once you figure out that your boyfriend is your third cousin, where do you go from there if you don’t call it quits? I never in a million years would have guessed that this is why they’d break things off, so props to New Girl for being completely unpredictable with that one.

And if you’re as bummed as I am that this didn’t work out for them, you can take comfort in the fact that the show dropped a major hint at the end that Nick and Jess could end up together (eventually) after all. When she finally made it to the party Winston was throwing at Schmidt and Cece’s new house, Nick mentioned that he’d love to eat her leftover trail mix raisins, because he loves them.

Originally, Nick and Jess broke up because they were just too different, but what if that’s exactly why they’re perfect for each other? There is so much more to the show than whether or not Nick and Jess get back together, but this is good clue that it could happen for those of us who are still rooting for them. Hopefully more hints involving raisins are in our future?