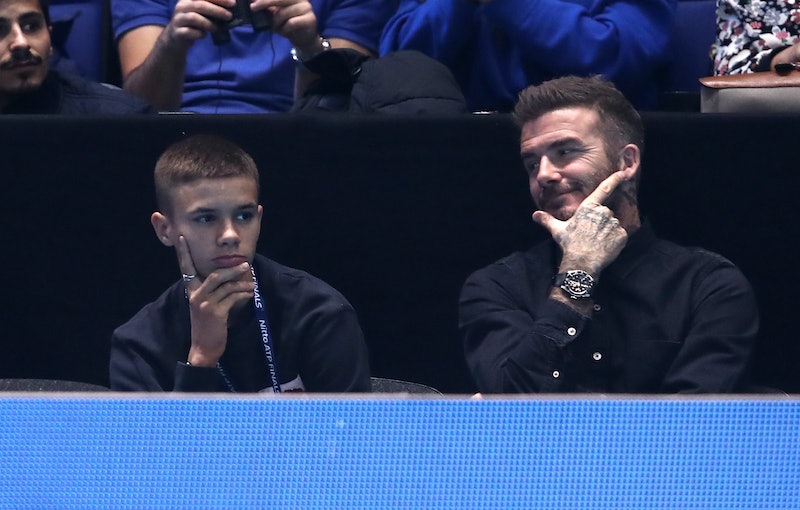 Father's day 2019 has been and gone, but is there ever a bad time to show your dad some appreciation? Some families seem to make loving each other a priority 365 days of the year. Families such as the Beckhams. The members of this famous clan have social media accounts full with dedications to one another, the latest being Romeo Beckham's shoutout to his dad on Instagram, which is so adorable you may well cry.

Romeo posted a picture of him and his pops smiling, cuddling, and looking happy as two peas in a pod. He simply but aptly captioned the picture with "love you dad."

Pause for total emotional meltdown over one young man's public display of love and appreciation for his darling dad.

But guys, like all great tales, things take a turn. Just when you think you've melted like a witch who's had a large bucket of water thrown over her, you melt even more. Because David's response is too cute for words.

The famous footballer and all round great bloke commented back, "love you more mate." Stop it! Stop it right now. I cannot even. Sending all that love back and then some? Even being all "the cool dad" calling him mate as well. Shut UP so cute.

But I guess what else kind of a response would you expect from someone who is so clearly dedicated to his brood. He and his wife Victoria have shared over 20 years of marriage and brought four kids they absolutely adore into this world. David often speaks about fatherhood and how proud he is of his children and family life. Last year he appeared on Australia's The Sunday Project and spoke about how you get out of children what you put into them:

"You know your children, they want your time, and they deserve your time, and we are hardworking, and we feel that is the right way to bring up our children. To prove and to show them that actually you have to work really hard to be successful."

And boy oh boy, he's not actually wrong is he? Because holy heck those kids of his actually are pretty hard working. Brooklyn has been interning with Rankin, Cruz is a passionate performer, and Romeo is not only a model but a keen tennis player too.

As a matter of fact, it appears that Romeo is actually pretty set on becoming a professional tennis player. So much so that he is being trained by one of the top-ranking male tennis players in the world, Grigor Dimitrov. The coach spoke to Hello about training the youngster and his love for the whole clan:

"Every time I'm in London, I try to [train] with him — it's something that I enjoy. I've known him for some time right now. [The Beckhams] are a great family."

Yikes with all this love, support, hard work, and talent — I guess the Beckhams will at some point take over the world. And I'm totally chill with that, TBH.