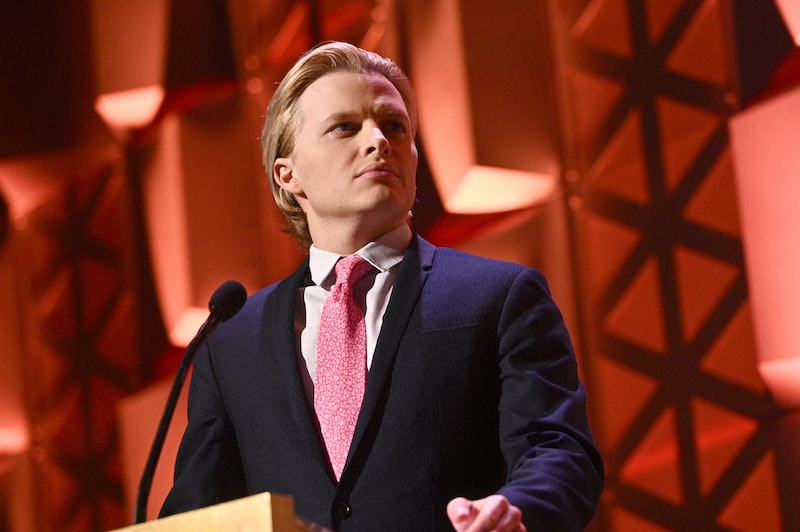 After helping to uncover accusations of sexual assault and harassment against Harvey Weinstein, investigative journalist Ronan Farrow published his bestselling true-crime book, Catch and Kill: Lies, Spies, and a Conspiracy to Protect Predators, earlier this year. Now, The Catch and Kill Podcast with Ronan Farrow will bring the details of both the Weinstein case and Farrow's investigation of accusations against Today host Matt Lauer to your favorite podcasting app. It sounds like Serial for #MeToo, and I'm sure it will be a must-listen.

Released on Oct. 15, Catch and Kill has captivated readers' attention across the country. The book details Farrow's investigation into the accusations against Weinstein, Lauer, and others — an investigation that was often harried by threats against the journalist, as well as delays, which he alleges were intentional. The threats didn't work. In Oct. 2017, just days after The New York Times reporters Jodi Kantor and Megan Twohey broke the story of the accusations against Harvey Weinstein, Farrow published his own story in The New Yorker after the story was killed by NBC. All three journalists shared the Pulitzer Prize for Public Service, and Kantor and Twohey released their own book this year, She Said.

While his early stories focused heavily on Harvey Weinstein, readers of Catch and Kill can expect significant portions of the book to be about the allegations against Lauer, who was fired from NBC in Nov. 2017. In a report published ahead of his book's release, Farrow told USA Today that "The Matt Lauer story is bigger than one person."

"[T]here's a lot of white-hot focus on the allegations against (him) revealed in this book," Farrow continued, "and there are people with an active interest in ensuring that the focus stays there. Just as significant is the reporting that suggests this was much wider and bigger than Matt Lauer: This was a company that was concealing a lot of secrets, and there were allegations against multiple people in senior positions that were covered up. That affected this news organization's coverage profoundly."

Regarding the surveillance and threats deployed against him, Farrow tells Entertainment Weekly that "If you are wealthy enough and connected enough you can literally construct a movie-style spy thriller operation to crack down on reporters.... [C]ode names and false identities and honeypots are all well and good in a Dashiell Hammett novel, but they aren’t the kinds of tactics that should be thrown at free press in this country."

The series will run for five to 10 episodes, and each episode is expected to be about 30 minutes long. The Catch and Kill Podcast with Ronan Farrow will "expand on his reporting for the book," according to Variety. An excerpt aired on The New Yorker Radio Podcast last week included an interview with Igor Ostrovskiy, the man who was hired, on Weinstein's instruction, to spy on Farrow, but who later became an ally and source to the reporter. There's no word yet on when The Catch and Kill Podcast with Ronan Farrow will air regularly, but the country will be waiting to pay rapt attention when it does.

Ronan Farrow's Catch and Kill: Lies, Spies, and a Conspiracy to Protect Predators is available now.