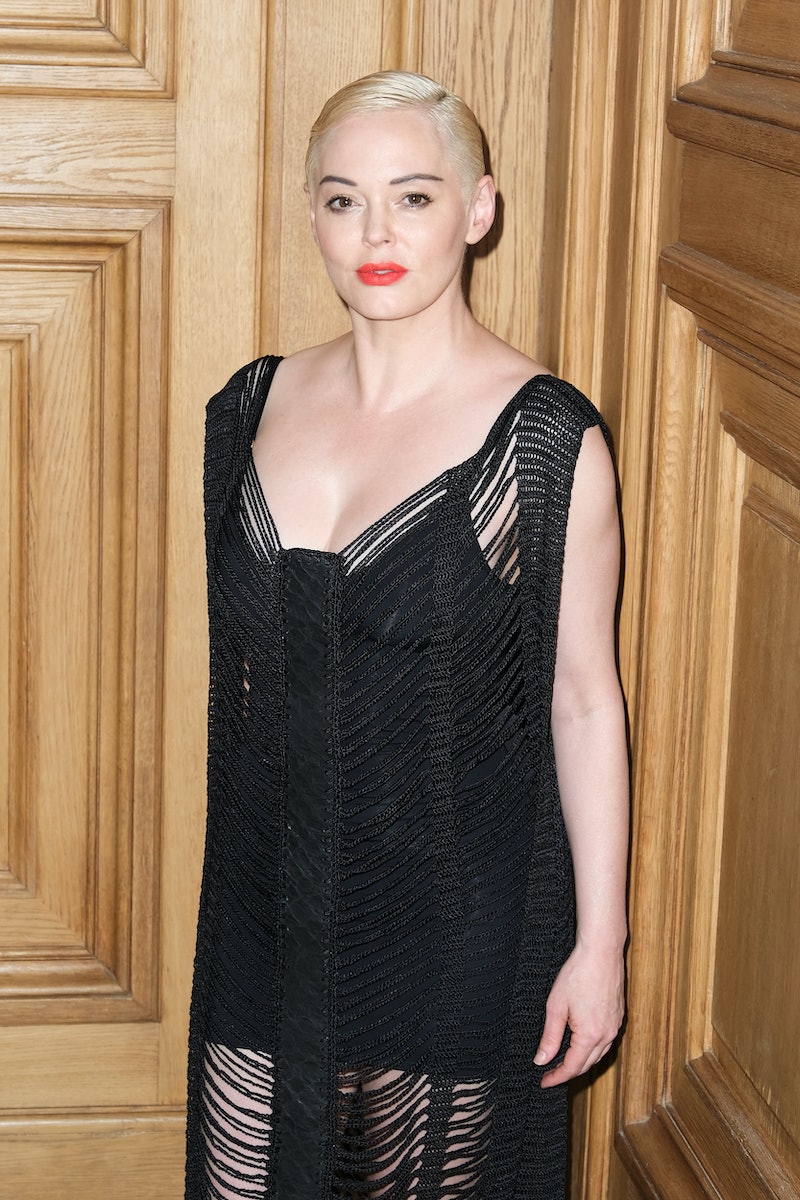 Harvey Weinstein is still trying to hold onto the very little power he has left in Hollywood, and his alleged victims aren't having any of it. Rose McGowan called out Harvey Weinstein after his interview with the New York Post, in which he claimed that he was a "forgotten man" who didn't receive credit for advancing women's careers. McGowan, however, would beg to differ, and rightfully so.

The actor took to Twitter on Monday, Dec. 16, to call out Weinstein by name after his interview made headlines the previous day. “I didn’t forget you, Harvey," she wrote. "My body didn’t forget you. I wish it could." The actor also made it clear that she had been planning to share her story for a long time. "I refused to sign an NDA after it happened because I knew I would come for you. And I did. This is about stopping a prolific rapist. You.”

McGowan publicly accused Weinstein of rape in 2017. Since then, Weinstein has been accused by dozens of women of sexual misconduct, and is reportedly in the process of potentially settling with over 30 accusers. He has maintained his innocence in the years since, and previously released a statement claiming that "he has never engaged in non-consensual behavior with anyone."

McGowan is not the only Weinstein accuser who took issue with his interview, in which he claimed that he should get credit for producing movies helmed by women before it was "vogue." “I feel like the forgotten man,’’ he said. “I made more movies directed by women and about women than any filmmaker, and I’m talking about 30 years ago. I’m not talking about now when it’s vogue. I did it first! I pioneered it! It all got eviscerated because of what happened. My work has been forgotten.’’

On Sunday night, McGowan, along with Ashley Judd, Rosanna Arquette and 20 other alleged victims responded to Weinstein's interview in a statement, in which they promised that he won't be forgotten. But if they have anything to say about it, he definitely won't be remembered the way he would like to be.

“Harvey Weinstein is trying to gaslight society again. He says in a new interview he doesn’t want to be forgotten. Well, he won’t be," the statement read, as per Variety. "He will be remembered as a sexual predator and an unrepentant abuser who took everything and deserves nothing. He will be remembered by the collective will of countless women who stood up and said enough. We refuse to let this predator rewrite his legacy of abuse.”

The interview comes before Weinstein's impending trial, where he faces five charges of predatory sexual assault. He has pled not guilty to all counts.

More like this
Twitter Is Identifying With Sally Field & Jane Fonda’s Friendship In New Viral Video
By Jake Viswanath
Austin Butler Recalls Lisa Marie Presley Showing Him Elvis’ Bedroom
By Jake Viswanath
Pamela Anderson’s Dating & Marriage History Could Be Its Own TV Series
By Jake Viswanath
Jennifer Coolidge Hunted For Jewels & Lashes In J.Lo’s Hotel Room
By Jake Viswanath
Get Even More From Bustle — Sign Up For The Newsletter
From hair trends to relationship advice, our daily newsletter has everything you need to sound like a person who’s on TikTok, even if you aren’t.