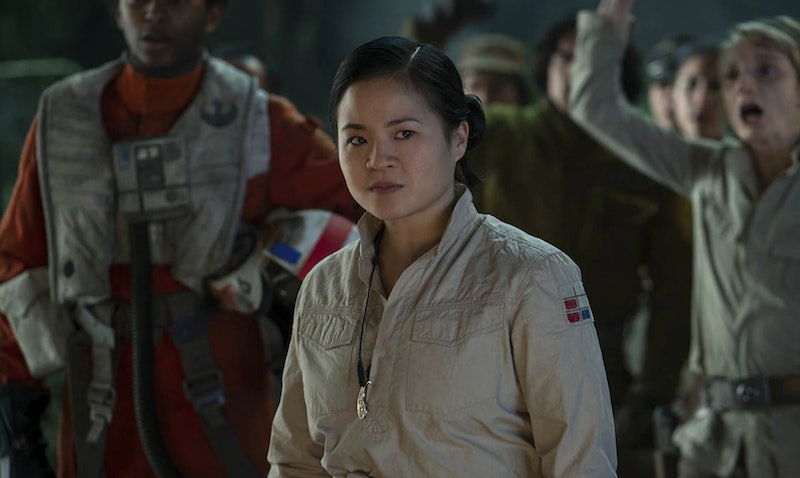 Star Wars: The Rise of Skywalker screenwriter Chris Terrio is aware that fans are upset about Kelly Marie Tran’s reduced role as Rose Tico after her debut in The Last Jedi. Now, on the heels of the controversy, Terrio, who collaborated with J.J. Abrams on the final installment of the franchise, said that Rose’s Star Wars sidelining wasn’t intentional. In an interview with Awards Daily before the holidays, Terrio explained how the decision to “anchor” Rose to the late Carrie Fisher’s iconic character, General Leia, resulted in minimal screen time for the maintenance tech.

Fisher died in 2016 at the age of 60 after she suffered cardiac arrest. Since her death came prior to the production of the Rise of Skywalker, Abrams and co. decided to salvage unused, archived footage of Fisher for the final installment. According to Terrio, the difficulties of using Fisher’s footage culminated in the final version of the film. “We wanted Rose to be the anchor at the rebel base who was with Leia,” he told Awards Daily. “We thought we couldn’t leave Leia at the base without any of the principals who we love, so Leia and Rose were working together.”

Terrio continued, “As the process evolved, a few scenes we’d written with Rose and Leia turned out to not meet the standard of photorealism that we’d hoped for. Those scenes unfortunately fell out of the film. The last thing we were doing was deliberately trying to sideline Rose.” He concluded, “We adore the character [and] Kelly — so much so that we anchored her with our favorite person in this galaxy.”

Moviegoers, however, did not exactly interpret Rose’s role in the same way. A few days after the film’s Dec. 20 theatrical debut, #RoseTicoDeservedBetter became a top trending topic on Twitter. For many, the slight felt all the more offensive since Tran became the subject of online harassment from Star Wars fans last year that prompted her to leave social media. One Twitter user wrote, “kelly marie tran appreciation tweet. despite everything, she was so graceful and kept her head held high during promo, despite only having 1 minute of screen-time in the movie. I will always respect and admire her for her strength.”

Tran’s minimal screen time (clocked at one minute and 16 seconds by Slate) even prompted Crazy Rich Asians director Jon M. Chu to pitch a Disney+ series with Rose Tico at the forefront. He tweeted on Dec. 26, “Ok @disneyplus. Put me in coach. Let’s make this series happen.”

Watch one minute and 16 seconds of Rose Tico in Star Wars: The Rise of Skywalker, available in theaters now.