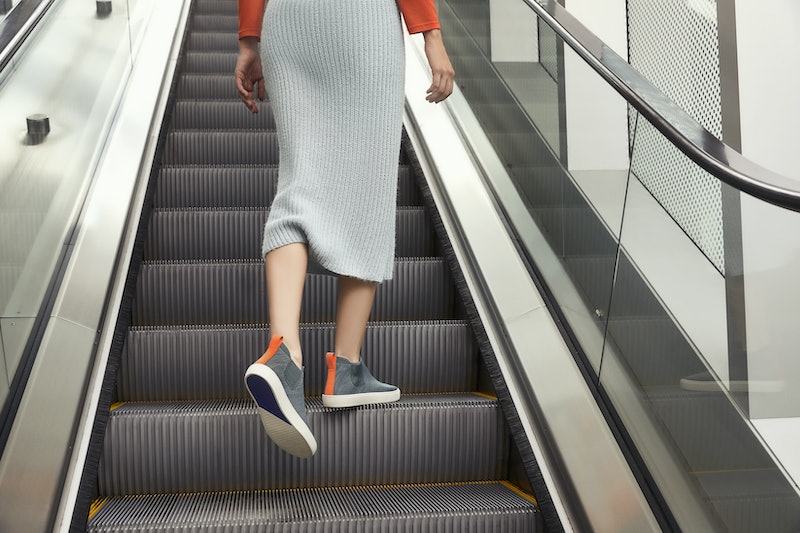 There's a new shoe in town for fall, and it happens to be approved by royalty. Rothy's Chelsea boot is the fall version of Meghan Markle's favorite shoes, and the new piece of footwear marks a new venture for the classic-meets-comfy brand.

Rothy's is predominantly known for its signature ballet flat. The shoes come in a multitude of styles, colors, and an incredible size range. Now, a new style of footwear is entering the brand's repertoire, and it's just in time for fall.

The new Rothy Chelsea boot is, well, a classic Chelsea boot. It's styled after the classic shoe created by the Chelsea Boot Company in 1851 that features a slip on design and a height that stop just above the ankle. The Rothy's shoe is the same, but unlike many Chelsea boots that are made with leather or suede, it's environmentally friendly made with repurposed water bottles with a vegan, carbon-free rubber outsole.

As for when you can snag the brand's new design, it's available now on the Rothy's website. The boot comes in eight different colors, including black, navy, lilac, white, gray, plum, frosted blue, and leopard.

While Rothy's isn't exactly a new brand on the scene, it did have a major moment in 2018 that garnered it gobs of attention, thanks to a certain royal. During a trip to Australia with her husband Prince Harry (and nearly immediately after announcing her pregnancy), Meghan Markle wore a pair of Rothy's flats. The Duchess of Sussex began the day wearing a pair of neutral stilettos but switched into the brand's best-selling pointed-toe flat while walking around Sydney. Let's be honest, no one wants to wear heels all day.

Fast forward only a few days and Markle had donned the same pair again while visiting a beach in Melbourne. Of course, the Meghan Markle effect took hold, and given that the shoes are under $150, people had to get their hands on a pair of the brand's flats.

Of course, flats are far from the only offering from the brand. While Markle may have helped make the style famous, and several pairs are listed in the brand's best-sellers section, Rothy's isn't just a pointed-toe flat brand. Fans of Markle's style can also find rounded toe versions of her shoe, a loafer, and a sneaker all in different colors with the same wide ranging size options.

Could Meghan Markle be one of the first celebrities to wear one of the new Rothy's Chelsea Boots? The Duchess of Sussex is well-known for re-wearing both items and brands that she likes. Even while in Australia, her Rothy's flats appeared twice. Only time will tell if she chooses to grab a pair of the Chelsea Boots for fall.