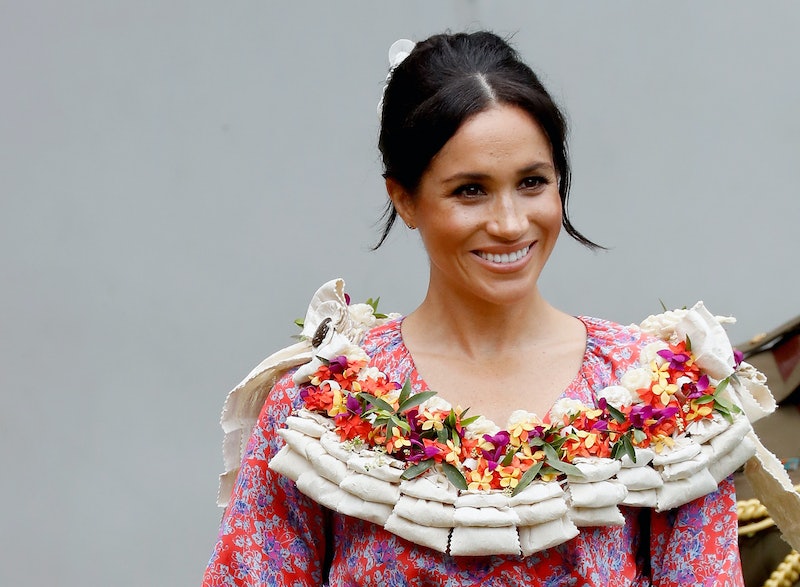 Meghan Markle has the fashion world at her fingertips. From custom Givenchy dresses to premiering designers latest creations, she can access basically anything. However, Meghan Markle's fashion favorites aren't always high-end designs, and while she could wear a different ensemble every day, she doesn't. In fact, since becoming the Duchess of Sussex (and even before), Markle has shown that she's got some style staples that she'll always stick to wearing.

Any time a member of the royal family wears something for the second time, it almost always hits the news. Markle, however, could just break the news cycle with how much she sticks to her favorite brands and pieces. Even duchesses have favorites, right? From denim to pumps to jewelry, Markle doesn't seem to care much about being an outfit repeater, and that's what makes her such a style icon.

Thanks to Markle being an outfit repeater (a la Lizzie McGuire), fans of the duchess and of royal style can get a pretty good idea of what she may consider staples as well as what could just be her favorite brands. Considering that Markle has already repeated multiple brands and pieces since her engagement announcement and wedding, style fans can officially parse through her choices to discern her favorite pieces.

What are some of Markle's favorite staples? Here's the definitive list.

One of Markle's most well-known outfits may just be one of her most minimal. Prior to her engagement to Prince Harry but after the announcement of their relationship, Markle attended Wimbeldon wearing a light wash, lightly distressed pair of raw edge denim from brand Mother. Those jeans ended up with a 400 person waitlist. In Australia, she wore the brand again.

Markle's latest Mother jeans have a darker wash than her last pair, but they look just as great (and they're still up for grabs).

Meghan Markle has worn the same pair of wedges, the Castañer Carina, twice while in Australia. The best part isn't that it's proof that the rumored kibosh on wedges from the queen may not be true, but the shoes are also only $120.

How cute are they?

When it comes to Markle's jewelry choices, minimalist pieces appear to be her preference, and one of her staples is actually a gift from Prince Charles. Markle has worn this tennis bracelet a few times since it was gifted to her.

Most recently, she wore it while arriving in Fiji with husband Prince Harry for their royal tour.

If Markle has a favorite shoe designer, it could just be Sarah Flint. She has worn more than her fair share of the designer including these sandals she wore twice in Australia. Plus, according to website What Meghan Wore, she also wore the same pair to a polo match during the summer.

Markle has also worn multiple pairs of Sarah Flint pumps. From this classic pair at her first outing with the Queen to a pair of tortoiseshell pumps she's worn to events such as the celebration of the Hub Community Kitchens' Together cookbook launch, Markle appears to love all all of Flint's designs.

According to the Daily Mail, Markle rewore her Stella McCartney cape dress that she wore to the Queen's 92 birthday back in April.

While this isn't exactly an affordable find (it's a four digit purchase), it is proof that Markle, like her sister-in-law Kate Middleton, will rewear a dress she loves. Who knew duchesses were just like us?

Meghan Markle is to J. Crew what Kate Middleton is to Zara. If the two duchesses do actually have favorite affordable brands, it's all J. Crew for Markle. While in Australia she wore the Sadie Ankle Boot, but it's far from the first time she's worn the brand.

Perhaps one of the most well-known times Markle wore J.Crew was her gorgeous navy and white stripe detail coat. Following her decision to wear it, it promptly sold out.

Markle has also worn J.Crew accessories in the past. This wicker bag she carried to the Sentebale polo match was just over $70.

While Markle hasn't quite reached Kate Middleton status when it comes rewearing things like dresses, shoes seem to be the Duchess of Sussex's weakness. Alongside wearing her Sarah Flint shoes multiple times, she certainly seems to have a weakness for Aquazurra heels. In fact, she wore them just last night in Australia.

They were the same pair she wore to the opening of the "Oceania" exhibit at the Royal Academy of Arts.

Plus, not only did Markle wear a custom pair for her wedding day, but she also wore a pair when she and Prince Harry announced their engagement.

Clearly, Aquazurra is a major part of Markle's shoe wardrobe.

Markle's duchess style does seem to lean toward more classic staple pieces (like pumps and traditional coats), and it makes sense that an item she has repeated is an Alexander McQueen blazer. She was first seen in the piece in February at the Endeavor Awards according to Brides.

Then, she wore the blazer again at a reception for the Invictus Games in Sydney in April.

While Meghan Markle often wears expensive clutches and bags from brands like Givenchy, she also mixes in some more affordable styles, and one of her favorites that she's reworn time and time again appears to be Strathberry. She was first spotted carrying a back back in December according to People.

The Scottish brand was next seen with Markle during a visit to Edinburgh (clever, right?).

She was last seen carrying the bags in July when she was in Ireland.

While Markle does love her Sarah Flint pumps, there's another shoe brand who's classic style she can't get enough of. Manolo Blahnik appears to be a staple in the duchess's closet. In fact, she just wore them in Tonga.

She also wore a pair to Princess Eugenie's recent wedding. In fact, Markle wears them so often that Footwear News has described them as her favorite shoe.

While Meghan Markle can wear practically anything on the planet, the duchess appears to have some serious favorites because as it turns out, duchesses are just like us.

More like this
The Best Heels For Bunions, According To A Podiatrist
By Margeaux Baulch Klein and Maria Cassano
Kim Kardashian Is “Disgusted & Outraged” By Balenciaga’s Troubling Ad Campaigns
By El Hunt
Kendall Jenner Just Paired A Cozy Sweater With Underwear & Sheer Tights
By Allie Fasanella
Twitter Can’t Get Enough Of Lewis Capaldi Creating Fashion Looks For ASOS
By El Hunt
Get Even More From Bustle — Sign Up For The Newsletter