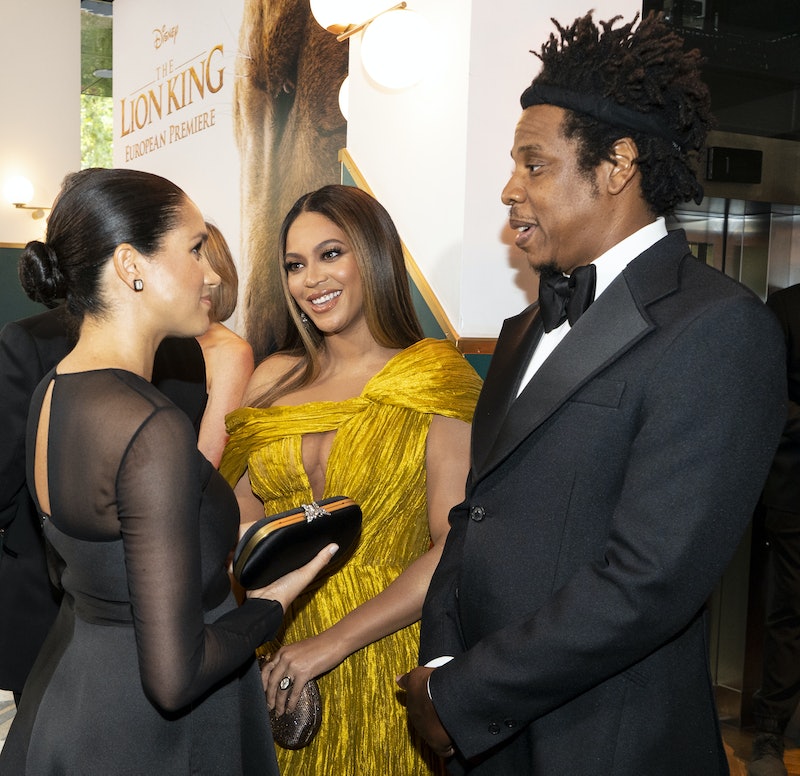 While Archie was not there for this meeting of the Melanated Monas, when his parents met Beyoncé and Jay-Z at the European premiere of The Lion King, they shared a story about him. According to People — and as seen in a video posted by royals reporter Omid Scobie — Harry told the couple about how Archie is now able to lift his head up. Beyoncé responded, "He’s holding his neck up?" and Harry showed how he cheered Archie on to do it.

So, it might be simple and something that most babies start doing eventually, but for Archie, four of the most popular people in the world have already had a conversation about him reaching a goal. Hopefully, he was following this momentous occasion on Twitter.

In addition to this story, the two couples' introduction involved Beyoncé telling Markle that Archie is "so beautiful," talk about how everyone must be so busy, and the Duke and Duchess of Sussex asking about the musicians' kids. "They are not here," Meghan Markle fan Beyoncé explained of her two-year-old twins, Rumi and Sir, according to People. "They don’t come on every trip. We left them at home. They would loved to have been here."

At one point in the conversation, Harry also said, "he's not so little anymore" in reference to Archie. This seems like a very new dad thing to say. Sure, Archie might not be as little as he was when he was first born, but a two-month-old baby is still pretty dang small, Harry.

Jay-Z left the Duke and Duchess with some words of wisdom after being a parent for seven years himself. (Blue Ivy Carter was born in 2012.) "The best advice I can give you, he said, "always find some time for yourself."

Luckily, both Markle and Harry have had some outings on their own since welcoming Archie. (Obviously, they went together to the Lion King premiere, and Markle recently spent some time with a couple old friends at one of Serena Williams' Wimbledon matches.) And it's good they're getting this time for themselves in now, because they're getting ready for a big parenting milestone: traveling with their baby.

In the fall, the family will visit southern Africa. Markle, Harry, and Archie will all go to South Africa, and the Duke will additionally visit Malawi, Angola, and Botswana. This trip will also mean that fans of the couple will get more pictures of them together and of little Archie. Or, "not so little" Archie, I should say. Not so little Archie, who already has Beyoncé as one of his fans. What a life.