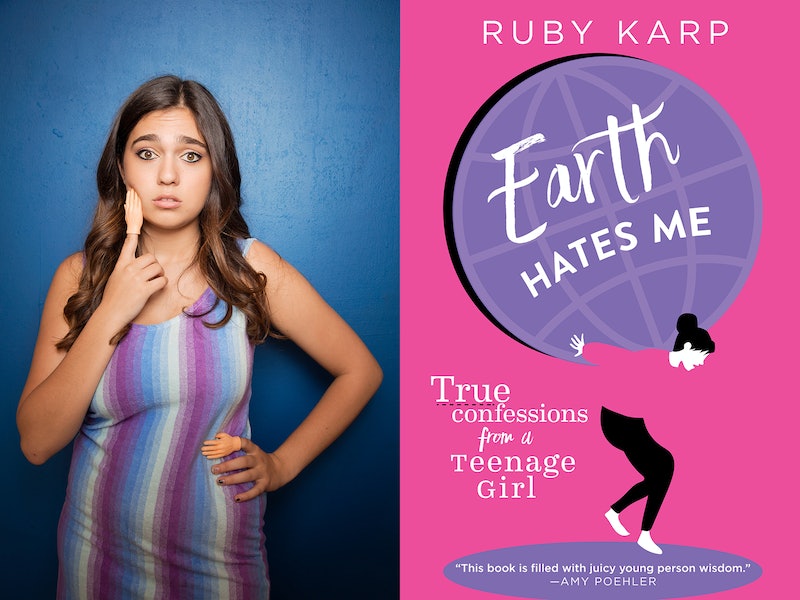 If you’re a millennial like me, Generation Z might seem too different to understand — like a Snapchatting, screen-addicted mystery. Unlike you and me, they’ve never recorded songs off the radio for a mixtape, carried quarters in the pockets of their flared jeans to call home, or heard the strange groaning beeps of dial-up internet. Instead, they’re so-called “digital natives,” a group even more tech-dependent than millennials are.

Yet, if you ask teen author and comedian Ruby Karp, she and her generation aren't that dissimilar from their predecessors. She tells Bustle she wishes adults would “finally realize that we’re not some, like, weird generation.” She promises they’re “normal people” with the same concerns as teenagers of old. In particular, they’re “freaking out about” the same things we once were (and maybe, to some extent, still are): crushes, friends, and their futures.

Karp provides proof of these claims in her new memoir, Earth Hates Me: True Confessions from a Teenage Girl. The book is geared toward other teens, meant to offer wisdom on growing up, but it can also serve as a lesson to those of us who are well into adulthood. It paints a picture of what it’s like to be a teenager today, and you’d be surprised by how much has remained unchanged.

Earth Hates Me: True Confessions from a Teenage Girl by Ruby Karp

Of course, Karp can only speak to her own experiences and those of the people she knows, but she uses them to teach lessons that can be applied universally. Her approach will be familiar to readers of Tina Fey or Amy Poehler, and numerous other notable authors of contemporary nonfiction.

“I looked at … how people use their life experience to talk about general life experience,” she says of the writings, books, and authors that inspired her.

Even with such solid examples, though, writing her own memoir wasn’t easy. Karp describes the experience as “really stressful” — much more so than she expected given that she has been writing articles and publishing them online since she was only 10 years old.

“It was one of those things where I just had to power through it basically, but there were a lot of really long nights and a lot of tears that went into it,” she tells Bustle.

Karp had to balance writing the book with her other commitments, which included completing her junior year of high school, extracurricular activities, doing monthly stand-up comedy shows with the Upright Citizens Brigade in New York City’s East Village, and more. It wasn’t easy, but she got the chance to share extremely important messages.

“I hope teens will take a lot of things out of it,” she says. “I think the most important things … are to call yourself a feminist and to try your hardest to do what’s best for you in high school.”

Karp discusses these both at length in her book, tackling issues like consent, depression, and peer pressure, among many others. She has keen insight, perhaps in part because she’s had the good fortune of being surrounded by a number of inspiring feminists over the years. In particular, she highlighted the women of the Upright Citizens Brigade, a “badass” and “awesome” group of comedians.

The teen has a long history of performing and sharing her work, which has helped her “learn a lot about [herself].” That was also true of writing Earth Hates Me. The stories Karp shares in the book were playing out as she wrote about them, giving her the chance to “figure [herself] out.”

“I was writing them while I was feeling them in the heat of the moment,” she says.

Since then, Karp has been able to go back and reflect on her emotions in different situations. With that distance, she has been happy to be vindicated on an important point; one of her major pieces of advice — to know that what’s hard for you will eventually not matter — has proved to be accurate.

Even so, Karp isn’t looking forward to reading Earth Hates Me in the future.

“I think I’m going to not want to read it at all,” she tells Bustle. “I cringe at myself already when I read the book. I can’t even imagine what it’s going to be like in 10 years.”

At that point, the book will hopefully be just one of many milestones in a successful career in comedy and/or writing. Karp still has college to worry about, but she already has her sights set on working on Saturday Night Live in the future, or being a famous stand-up comedian.

Those goals are ones multitudes of millennials might have had at her age, or even now, it looks like she is right: Our generations aren’t that different after all.

Earth Hates Me: True Confessions From A Teenage Girl by Ruby Karp, $10, Amazon