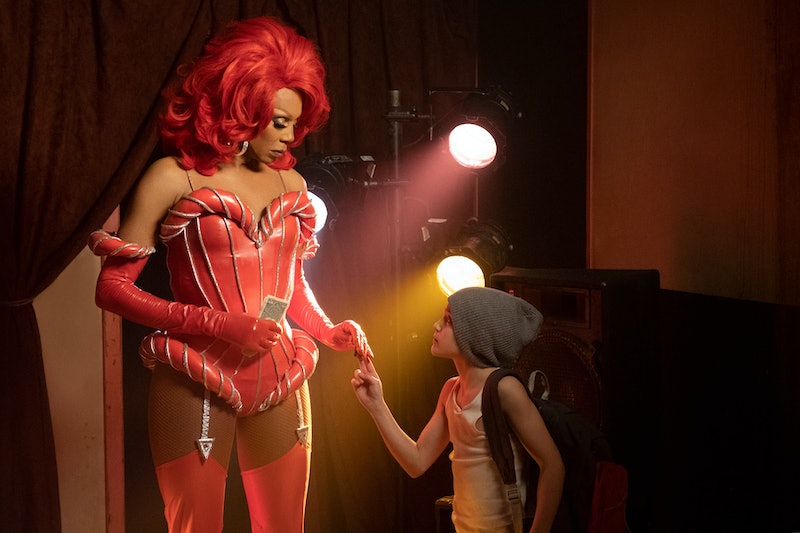 Ruby Red better work. The official trailer for RuPaul's Netflix series AJ And The Queen starts with the drag queen's last performance before opening her own club. Problem is, Ruby Red, whose real name is Robert Lee, just lost her life-savings to a no-good guy. Now she's hitting the road to make some cash, but she's got a little something extra in her trunk: a 10-year-old stowaway who doesn't know who Diana Ross is. The nerve! But, that's not all AJ and the Queen is packing. RuPaul also brought 22 former Drag Race contestants along for the ride, too. So start your engines.

The trailer for this comedy series, co-created by RuPaul and Sex and the City's Michael Patrick King, starts with Ruby Red's final show. No surprise, she knows how to bring the house down. She just isn't so good with her money. After she's taken for all she's got by a grifter (Josh Segarra) and his partner-in-crime, Lady Danger (an eye-patch wearing Tia Carrere), Ruby Red embarks on a cross-country tour to make back what was stolen from her.

Now, if you think this show is about a drag race, well, you would be mistaken. Instead, it's about this Queen getting to help a streetwise little kid named AJ who was hiding out in her RV get to Texas. Just like Ruby, AJ's a little lost, which is why she's willing to play mom for the time being. Let's just say Ruby's got a knack for it, but AJ also has a few things to teach her about life, too.

This is definitely the kind of family show that's gonna pull on your heartstrings. Netflix describes it as being, "Part Priscilla, Queen of the Desert, Part Touched by an Angel." But RuPaul made it clear to Vanity Fair that AJ and the Queen is not a children's show. "This show isn’t about a drag queen in a kids show. This is about a kid in a drag queen’s show," RuPaul said. "It’s edgy, and it has some dark themes in there."

Each episode of the show will include a performance from RuPaul. If we're lucky, it might also include some Drag Race showdowns. RuPaul's Drag Race stars like Trinity the Tuck, Latrice Royale, and Pandora Boxx, all appear on the show, according to Entertainment Weekly.

AJ and the Queen starts streaming Jan. 10 on Netflix.