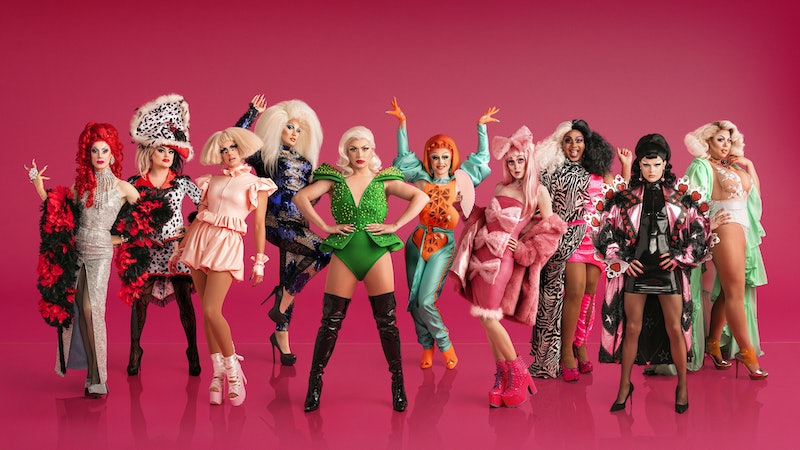 The level of Drag Race news is almost becoming too much for UK fans. First, the line-up of the UK series was announced. Then the premiere date was finally revealed (Oct. 3, in case you're wondering). And now, viewers have a RuPaul's Drag Race UK podcast to contend with. Who's hosting it? Well, only one of the nation's most-loved reality stars.

On Friday, Scarlett Moffatt, queen of the jungle and Gogglebox icon, announced that she would be hosting the official UK Drag Race podcast. The 29-year-old took to Instagram to share the glorious news, writing: "Everybody who knows me knows I’m a huge huge fan of RuPaul's Drag Race since the very beginning and all that it stands for and how much it helps the LGBTQ+ community."

Moffatt added that she couldn't wait to spill the tea, share the gossip, and catch up with the queens "on the sassiest podcast around." She also revealed her co-host: Baby Lame. One of London's "most exciting alt-cabaret stars," Baby describes herself as a "punk horror drag starlet."

Two national treasures on one podcast? Count me in.

I've reached out to Moffatt's representative to see if more information can be revealed, so stay tuned. One can assume that the UK podcast will follow in the footsteps of the U.S. version. Released weekly and featuring queens and insiders, it is hosted by one of the series' writers and producers, John Polly.

The first episode of RuPaul's Drag Race UK is set to premiere on Oct. 3 at 8 p.m. on BBC Three. Due to BBC Three no longer being a TV channel, you'll only be able to watch it on BBC iPlayer, but episodes are still scheduled to be released weekly.

A glimpse of the first UK outing was revealed on Twitter. In it, RuPaul introduces the judging panel: long-time Drag Race judge Michelle Visage and two special guest judges in the form of Alan Carr and Andrew Garfield. "I feel like a competition winner and the prize is a day in gay heaven," Garfield notably comments. The episode will involve a runway performance from the contestants with a fitting royal theme.

Fans no longer have to wait to see who will be starring in the series. Earlier this week, the 10-queen line-up was announced. Contestants range from Belfast's Blu Hydrangea and The Voice star Divina De Campo to Essex-based sensation Cheryl Hole and the youngest ever Drag Race queen, Scaredy Kat.

A West End star will be taking part too. Vinegar Strokes starred in Everybody's Talking About Jamie alongside Drag Race's very own Visage.

The identities of several celebrity guest judges have also been uncovered. Carr and Graham Norton will take it in turns to be resident judges, states Radio Times, while the likes of Game of Thrones' Maisie Williams, Chewing Gum's Michaela Coel, Little Mix's Jade Thirlwall, and Cheryl will be making one-off appearances. (I'm sure Cheryl Hole will be thrilled with that one.)

With some truly entertaining participants and judges, this series could be the best thing to ever hit TV. See you in the werk room.