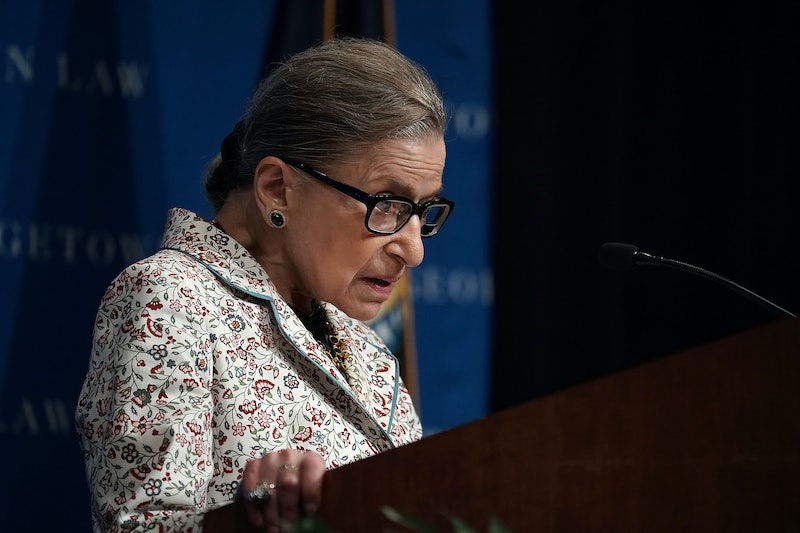 A significant percentage of the American population sighed a breath of relief on Christmas Day, when it was reported that Supreme Court Justice Ruth Bader Ginsburg had been released from the hospital following a surgery she had to remove two cancerous nodes from her lungs. However, it appears that her recovery isn't yet complete. Ruth Bader Ginsburg will miss Supreme Court arguments for the first time in 25 years as a Supreme Court justice, the Associated Press reported on Monday.

Ginsburg won't just be relaxing, though, as CNBC reported. A court spokeswoman said that she would be working from home "on the basis of briefs, filings and transcripts," CNBC wrote. This is the Supreme Court's first day back in session after the holidays, and it's also the first time in Ginsburg's entire tenure as a justice that she won't be there to hear the arguments in person, as The Washington Post reported.

Ginsburg's December surgery was an extensive one, as doctors had to entirely remove one of the five lobes of her lungs in a procedure called a pulmonary lobectomy. A statement from the Supreme Court released in late December stated that the surgery successfully removed the two cancerous nodules, which doctors had discovered when they were treating the justice after a fall in which she fractured multiple ribs.

"Post-surgery, there was no evidence of any remaining disease," the Supreme Court statement read. "Scans performed before surgery indicated no evidence of disease elsewhere in the body. Currently, no further treatment is planned."

Doctors see this as a positive story of catching lung cancer early, as ABC News reported. Even as it was immediately clear that her surgery had been successful, though, Ginsburg didn't make the decision to work from home on Monday public until the morning that the arguments were set to begin.

Ginsburg is 85 years old, and she's been on the Supreme Court since 1993, when she was nominated by President Bill Clinton. This decision to miss arguments is notable, though, because despite numerous other health problems, she's never missed a day before.

During her 25 years on the court, Ginsburg has had several serious health problems, as NBC News wrote. She survived both colon and pancreatic cancer, and she had a stent placed in her heart in 2014. The three ribs that she fractured led to a short hospital stay in November, as ABC News reported at the time. While this caused her to miss the formal ceremony which officially made Brett Kavanaugh into a Supreme Court justice, none of these health problems ever forced her to miss oral arguments. Not even the death of her husband in 2010 caused her to miss a day, as ABC News noted.

For those who would worry that her lengthy recovery from this surgery means that her diagnosis was worse than originally reported, The Washington Post has good news. The University of Pennsylvania's chief of thoracic surgery told the Post that doctors wouldn't perform the surgery that they did on Ginsburg unless they were sure that the cancer hadn't spread elsewhere in her body. So for now, you can keep being as optimistic as Ginsburg was when she declared in August 2018 that she would work for another five years, as CNN reported — that is, until she turned 90.