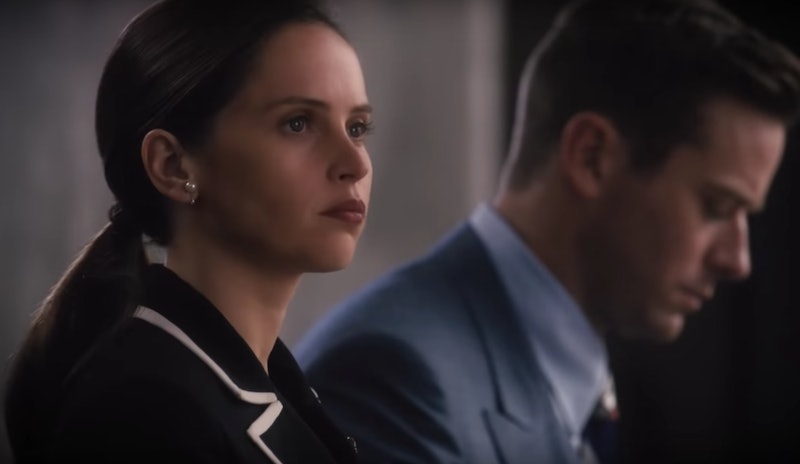 The new biopic about Ruth Bader Ginsburg, On the Basis of Sex, tells the story of how the now Supreme Court justice argued a case that ended up being the foundation of her career. Throughout the film, her husband, Marty Ginsburg (Armie Hammer), champions Ruth (Felicity Jones) in her pursuit of changing the laws that discriminate against on the basis of gender. And that supportive partnership wasn't an invention of the film. Ruth and Marty Ginsburg's marriage was a huge source of inspiration for the movie, opening wide on Jan. 11, as the exclusive featurette below shows.

"The film explores a relationship that was very supportive," Jones says in the clip. The director of On the Basis of Sex, Mimi Leder, adds, "On the Basis of Sex is a about a case that changed hundreds of laws for women, but at the heart of this story is a love story." Marty Ginsburg passed away in 2010. He and Ruth had been married for 56 years, per his New York Times obituary.

Anyone who sees the RBG biopic will likely walk away from the theaters feeling a new sense of appreciation for Marty Ginsburg and how his evolved views about what women — especially his wife — were capable of stood out, during a time when sexism and gender roles kept others down. Of course, you'll also feel a great sense of appreciation for Ruth herself, too, because, y'know, she's a total badass who litigated major Supreme Court cases to change unconstitutional laws.

Marty and Ruth not only shared a deep love for one another, but they also had similar interests and goals. The couple met while attending Cornell University, and they got married as soon as she graduated, in 1954, per CNN. From there, the two attended law school, and then moved to New York City, where Marty encouraged Ruth to pursue her career despite difficulties. "I became a lawyer in days when women were not wanted by most members of the legal profession," she said, per CNN. "I became a lawyer because Marty supported that choice unreservedly."

Though Hammer's portrayal of Ruth's superbly supportive husband might make you swoon in your theater seat, the film's accurate picture of the doting husband who wasn't threatened by his wife's intelligence or career almost caused the movie to lose its financial backing.

In a New York Times interview with the cast and creators of On the Basis, screenwriter Daniel Stiepleman said, "I remember at some point saying in a meeting, 'There’s a 5,000-year history of narrative, of men coming home from battle, and their wives patch them up and boost their egos and send them back out to fight again.' You write one supportive husband, and everyone’s like, such a creature could never exist!"

As Leder says in the featurette, Ruth and Marty Ginsburg's equal relationship can inspire everyone who sees the movie to strive for a similarly supportive partnership instead of settling for less. The Notorious RBG is already fitness goals and take-no-sh*t goals, but thanks to the focus On the Basis of Sex puts on their marriage, you can look to her life story for #relationshipgoals too.

More like this
Sandra Bullock, Girlboss Extraordinaire
By Matt Harkins & Viviana Olen
Blake Lively & Ryan Reynolds’ Relationship Timeline Is Filled With Trolling
By Jake Viswanath
Remember When Benedict Cumberbatch Announced His Engagement In A Newspaper Ad?
By Hugh McIntyre
The 1st Photo Of Priyanka & Nick's' Baby Comes After 100 Days In The Hospital
By Jake Viswanath and Hugh McIntyre
Get Even More From Bustle — Sign Up For The Newsletter