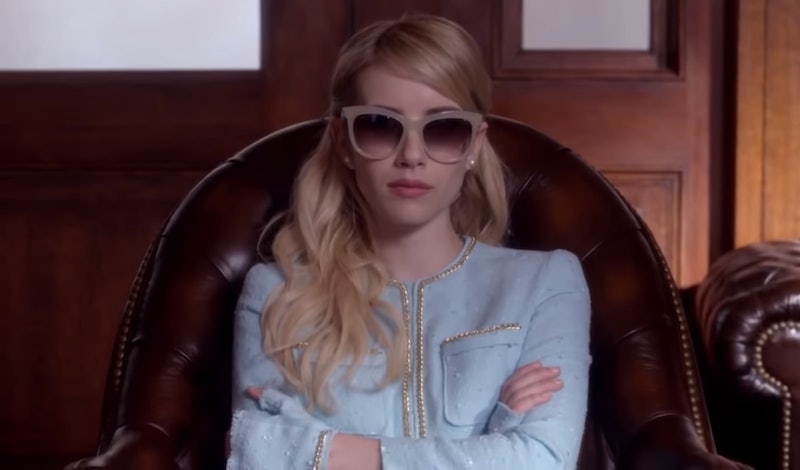 Chanels assemble. On Sunday, Feb. 3, one of the creators of Scream Queens punted a wicked intriguing Instagram caption, watched it sail right between the goalposts, and let the fans go wild in the stands, er, comments. TV titan Ryan Murphy teased a Scream Queens revival yesterday, and duh, people are freaking out accordingly. "So many people recently have been asking me about rebooting or continuing SCREAM QUEENS (RIP, taken too soon)," Murphy wrote. "Emma, Billie, Lea and I have mused on it, but question: should it be a six episode limited? A catch up movie? Who should I bring back? Would love your thoughts. So many questions…."

You know who else has so many questions? Uh, Scream Queens fans who are clamoring for the revival of this short-lived comedy-horror series. Starring Emma Roberts, Lea Michele, Abigail Breslin, Billie Lourd, Keke Palmer, and Jamie Lee Curtis, Scream Queens premiered on Sept. 22, 2015. The series, which was a show about a bunch of sorority girls who are targeted by a college mascot costume-wearing serial killer, was canceled after two seasons. This news did not sit well with fans.

Naturally, Murphy's recent post about "musing" on a possible reboot sent the Scream Queens queendom into a frenzy. Again, he did not make any official declarations or confirm anything is actually happening, but his remarks are definitely more promising than not.

So Raise Your Glass To The Possibility Of A Reboot

Quick, Get The Fainting Couch

That fainting couch better be upholstered in only the finest satin.

Sigh. Like Scream Queens, Don't Trust the B----- in Apartment 23 was another terrific show that got the ax far too early.

I'm so *bleeping* grateful for this reboot suggestion.

Who Lives In A Scream Queens Under The Sea?

*Cups hands around ear.* Ah, yep. I hear it. Loud and clear.

Our Hopes Are Higher Than Chanel Oberlin's High Heels

Last year, Murphy signed a huge deal with Netflix. So bearing that in mind, it stands to reason that if Murphy were to reboot Scream Queens, it'd probably happen over on Netflix. That'd be neat.

What A Great Internet Challenge Idea

I am extremely here for it.

Keep your eyes peeled and your bubblegum popped, that is.

Whether it be "a six episode limited" or a "catch up movie," it sure sounds like fans are on board. Diehard Scream Queens fan and Vanderpump Rules star Stassi Schroeder took the words out of so many Scream Queens heads' mouths when, in response to Murphy's post, she tweeted, "Please sweet baby Jesus. The people NEED this. @RobertsEmma." I scream, you scream, Stassi screams for Scream Queens.