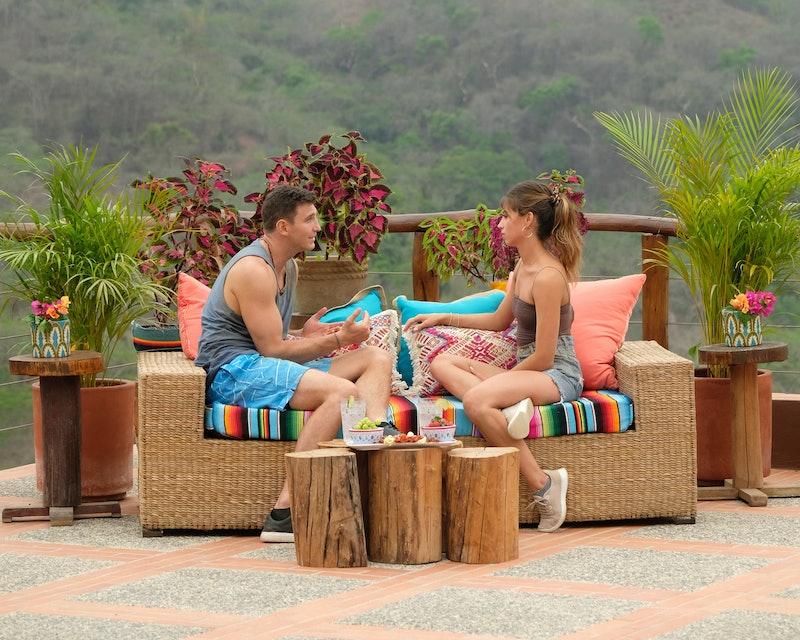 If you’ve ever tuned into a reality dating show like Bachelor in Paradise or Love Island, you’ll know that cast members hooking up with one another is pretty par for the course. After all, the point of such shows is to (hopefully) find love — and exploring physical intimacy with someone can be a big part of making a romantic connection. But for as much onscreen sex and intimacy as we see on reality dating shows, there’s one very real aspect of sex that isn’t often discussed on camera: sexual health and safety.

Long-time host of the Bachelor franchise Chris Harrison recently joked on Lights Out With David Spade that, along with costs of STI testing, the show’s condom budget is “easily the biggest expense.” Although his comment might have been made in jest, it’s nonetheless refreshing to know that there are apparently measures in place which prioritize the sexual health of cast members. (Bustle reached out to ABC for comment but did not receive comment prior to publication.)

Similarly, it was reported in The Sun that the UK iteration of Love Island “offers” STI tests to contestants before they enter the villa — and one contestant from 2016, Liana Isadora Van-Riel, said there are “loads of Love Island branded condoms” available. (Bustle reached out to CBS and ITV2 for comment but did not receive comment prior to publication).

However, there’s a lot more to creating an environment that encourages safer sex practices than simply handing out free condoms and screening potential cast members for STIs. Bustle spoke with sex and relationship experts to find out what safer sex could and should look like on reality dating shows, as well as the potential benefits of creating more transparency about what really goes on behind closed bedroom doors.

The Role Of Consent In Safer Sex

When most people think of having safer sex, the first things that come to mind are likely methods of barrier protection like condoms and dental dams, or things to prevent unwanted pregnancy like IUDs and oral contraception. However, the physiological component of having safer sex is just one small part of a much larger idea.

“Beyond protecting ourselves, and partners, from STIs and unwanted pregnancies, truly ‘safer sex’ practices involve being mindful of how being sexual can impact the emotional/psychological well-being of those involved,” Dr. Nan Wise, sex educator, therapist, and neuroscientist, tells Bustle. “First and foremost is to make sure that the sexual activity is truly consensual — involving good decision-making by people who are capable in that moment of being able to do [so].”

Conversations about consent on reality dating shows came to the forefront in 2017, following an incident during season four of Bachelor in Paradise in which two producers reportedly expressed concern that a hookup between contestants DeMario Jackson and Corinne Olympios was not consensual. Ultimately, production was suspended in order to investigate the issue, and when the show returned to air, Chris Harrison sat down with the remaining cast members (Jackson and Olympios had both left) to talk about what had happened that night and about what constitutes consent.

In a statement obtained by People, Olympios explained that she initially hired a legal team to "get to the bottom of what had occurred" the night of the alleged sexual misconduct, and stated that the investigation was "completed to [her] satisfaction" and no charges were brought against Jackson.

According to a report from E! News, following the season four scandal, Bachelor in Paradise contestants are now reportedly required to give prior consent on camera before having sex — and there is a two-drink per hour maximum in place that did not exist prior. In her People statement, Olympios expressed that she was "happy with the changes that have been made to the production of Bachelor in Paradise."

While these shows may feel like their own bubble, the truth is that cast members’ feelings and experiences don’t exist in a bubble — and any intimacy they engage in on these shows has the potential to have lasting real-world effects, such as experiencing the damaging effects of slut-shaming (like Olympios did following the aforementioned incident) or even dealing with allegations of sexual misconduct and having your character publicly called into question as was the case with Jackson.

There’s also the fact that, for those participating in the show, the feeling of being in a bubble can contribute to added pressures that they may not normally experience in a more traditional dating context.

“There is implicit pressure and likely explicit pressure to engage in sex as this makes for good ratings and can help contribute to someone’s fame (or infamy),” Elizabeth Jeglic, Ph.D., clinical psychologist and sexual violence prevention expert, tells Bustle. “This pressure can also be coercive and individuals who otherwise would not engage in such behaviors when not on a reality show may feel pressured to engage in behaviors they are not comfortable with.”

So how can producers of these types of shows lessen the sexual and romantic pressure that cast members feel? By better fostering an environment where every aspect of safer sex — from condom use to consent — is encouraged.

How To Foster A Safer Sexual Environment On Reality TV Shows

Even if cast members don’t feel pressure to engage in sexual activity “for the cameras,” that doesn’t mean they may not experience unusual or confusing feelings about sex and intimacy as a result of the environment — which is why it’s so crucial that these shows have systems in place to offer support for contestants (aside from tossing them the occasional condom).

“I think it’s imperative for dating shows to have policies around safer sex in place, so long as they also protect the participants, and not just the show itself,” Emily Depasse, a writer and sexologist who focuses on redefining the narrative around STIs, tells Bustle. “I’m not sure if participants transition into the shows with any kind of training or orientation, but I think breaking down definitions around safer sex and participants’ expectations through some kind of group training would be useful. Almost like their own sex education.”

How might producers go about offering “sex ed” to cast members? Depasse suggests that they could bring in sex educators to discuss the risks involved and give participants the tools to navigate safer sex, consent, and pleasure, or they could even create templates for various conversations to help them better navigate these moments in real-time.

Cast members could also have mandated therapy sessions in order to hash out their thoughts and feelings about their romantic and sexual connections with a licensed professional instead of just with other cast members. (According to Amy Kaufman’s book, Bachelor Nation, there is a therapist on set of The Bachelor, but it’s unclear what the relationship between the therapist and the lead looks like or if there is also a counselor present in Paradise.)

Essentially, the most important thing production can do is give contestants the tools they need to have safer sex — not only supplying them with lube and condoms, but also giving them more emotional and mental support throughout their romantic and sexual journeys on the show, and by providing them with better upfront education on consent and setting boundaries.

Should Reality TV Shows Be More Candid About The Realities Of Sex?

Even though it came in the wake of a scandal, the decision in 2017 to air that important, frank discussion between cast members and Chris Harrison about consent shows that producers know they have a responsibility to be candid about the real aspects of reality TV, especially when something as important as cast members’ sexual safety and emotional well-being is at stake.

“[These shows] have a forum in which millions of Americans are watching and thus if they are at the forefront of healthy sexual behavior they have the opportunity to make significant changes in our culture,” Jeglic says. “They have the responsibility to model safe sexual practices not only for those involved in the show, but for all those that are watching at home.”

If The Bachelor franchise can air a productive and candid conversation about consent, then what’s stopping them (and other shows) from going a step further and being even more upfront and transparent about the realities of dating and hooking up on TV? Modeling safer sex for viewers doesn’t always have to mean having someone mediate an important discussion about consent. It could also come in the form of showing more candid, true-to-life conversations about sex among the cast members.

“By integrating conversations and participant’s real views/experiences with these issues, shows can speak to these concerns with their audiences to promote empowerment while still being wildly entertaining,” Dr. Catalina Lawson, Ph.D., licensed clinical psychologist at Psychotherapy Without Borders, tells Bustle. “These shows can produce these situations to highlight the vulnerabilities or fears characters have, to normalize for audiences who experience similar challenges. These are tough situations for anyone to face — that’s the reality. Shows could capitalize on this by integrating these topics into their show rather than keeping them off-screen.”

It may not be as “sexy” as simply showing the highlights of an on-camera hookup, but in order for these reality shows to truly reflect reality, it’s important to show exactly how complicated and confusing it can be to navigate sex and relationships. Besides, if we’re already used to seeing sex and intimacy on our screens, we might as well all learn something from it.

More like this
A Full Debrief Of Who Follows Who From Love Island – & Who Doesn’t
By Shahed Ezaydi
Ekin-Su & Davide’s Next Move Is Confirmed & Involves *A Lot* Of Travel
By El Hunt
The Love Island 2022 Reunion Drama, Explained
By Sophie McEvoy
7 Cracking Quotes From 'Love Island' 2022
By Frances Stewart
Get Even More From Bustle — Sign Up For The Newsletter