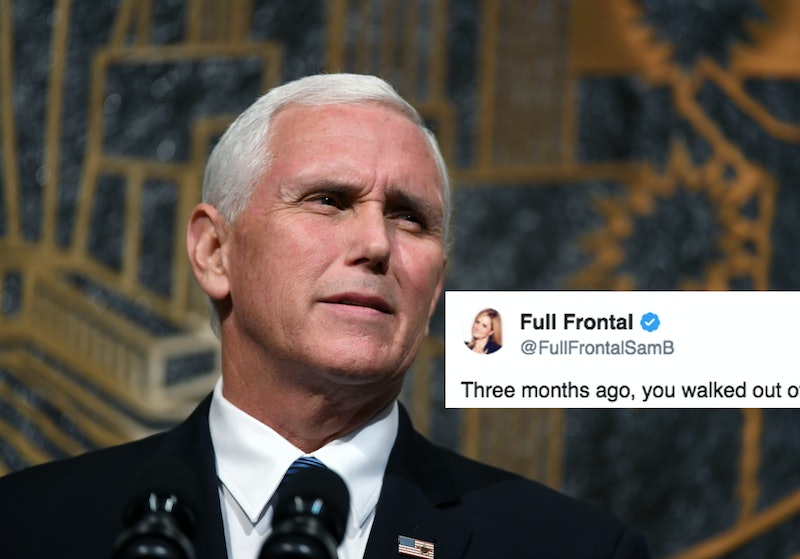 Days after President Trump was heavily criticized for reportedly calling Haiti, El Salvador, and African nations "sh*thole countries," the Trump administration commemorated Martin Luther King Jr. Day. In his own show of respect, Vice President Mike Pence shared on Twitter that he and his wife were "honored" to lay a wreath at the Martin Luther King Jr. memorial in Washington D.C. on Monday. However, comedian Samantha Bee called out Pence's MLK Day tweet, pointing out exactly why she believes it's hypocritical.

The VP posted three photos of him placing a patriotic wreath in front of the granite monument that towers over West Potomac Park. "He was a great American leader who inspired a movement & transformed a Nation," Pence tweeted. "He took the words of our Founders to heart to forge a more perfect union based on the notion all men are created equal & in the image of God."

Bee wasn't buying it. She retweeted the VP, adding: "Three months ago, you walked out of an event in disgust because of a non-violent protest by black athletes." The comedian was referring to Pence leaving an October NFL game between the Indianapolis Colts and the San Francisco 49ers after players knelt during the National Anthem as part of an ongoing protest.

Former 49ers quarterback Colin Kaepernick first sat during the anthem in 2016. "I am not going to stand up to show pride in a flag for a country that oppresses black people and people of color," he told NFL Media at the time. He later began kneeling rather than sitting as a show of respect for military veterans, and more NFL players joined him in protesting the nation's treatment of people of color.

President Trump criticized the athletes engaging in nonviolent demonstrations at a rally in Alabama last September. He encouraged fans to "leave the stadium," recommended NFL owners fire the protesters, and called a participating athlete a "son of a bitch."

A month later, the VP took the president's advice and left the stadium when he saw players kneeling. "I left today's Colts game because @POTUS and I will not dignify any event that disrespects our soldiers, our Flag, or our National Anthem," Pence wrote on Twitter in October. "While everyone is entitled to their own opinions, I don't think it's too much to ask NFL players to respect the Flag and our National Anthem."

Bee's tweet served as a reminder that Pence actively stood against athletes speaking out about racism in America just three months ago. Him laying a wreath on Dr. King's grave on Monday was a symbolic gesture of respect for the Civil Rights leader's legacy, but his recent actions have been in direct opposition with those fighting for equality today.

In fact, Dr. King's daughter Bernice King compared the NFL protest to her father's similarly nonviolent demonstrations. "No form of protest, even nonviolent direct action, will be approved by people 'more dedicated to order than to justice' or by the unjust," she tweeted in response to Trump's September comments. "People didn't approve of the way my father protested injustice either; said he was causing trouble, called him an 'outside agitator.'"

Along with Pence, President Trump was also criticized for his MLK Day activities. The White House tweeted a video on Monday of the president saying Dr. King's dream is the American dream. "It is the dream of a world where people are judged by who they are, not how they look or where they come from," Trump said. Coming less than a week after Trump reportedly called Haiti, El Salvador, and African nations "sh*thole countries" in an Oval Office meeting and subsequently called himself "the least racist person," the comments came off as tone deaf to many.

Those calling out Pence and Trump on MLK Day want the administration to do more for people of color than quote the Civil Rights icon or lay a wreath at his memorial. NFL protesters — and the rest of the Black Lives Matter movement — are still fighting for Dr. King's dream to become a reality.