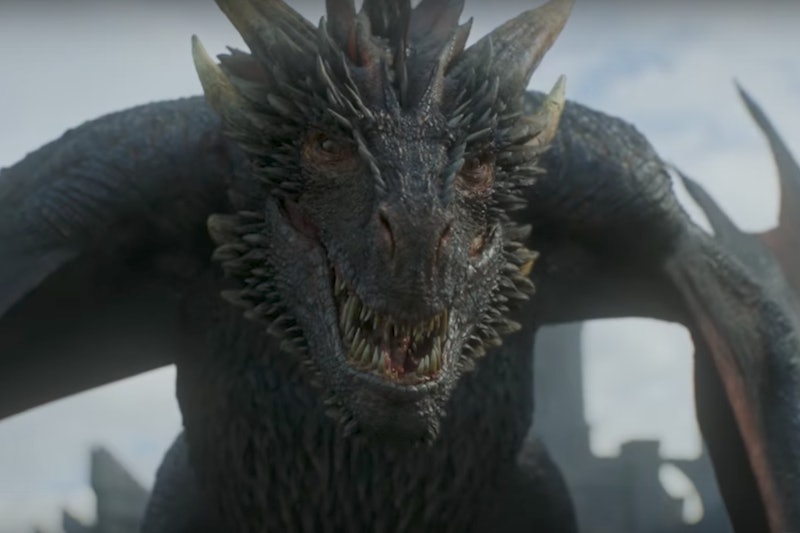 Winter may still be coming… but at least the new Game of Thrones Season 7 trailer is already here to tide fans over until the cold weather arrives with the July 16 premiere. The newest promo is an action-packed two minutes featuring plenty of action, explosions, dragons… and tantalizing clues about what to expect from the fantasy series' penultimate season. Little is known about the top-secret batch of episodes, which both strays the farthest yet from George R.R. Martin's source material and sets things up for the final season. But if this trailer is any indication, the show won't be playing it safe or holding anything back in its preparation for the climactic events of Season 8.

The first trailer for GoT Season 7 featured a lot of setup, as maps were (literally) drawn, surviving characters were reintroduced, battle plans were discussed, and marauding dragons were barely teased in the closing seconds of the promo. This time, all of that promising set-up finally explodes into action, as the new trailer features a series of action scenes that will make any diehard fan's heart race with excitement. I wasn't sure it was possible to get any more hyped for the final season than I already was… but this footage sure did the trick.

Here are the most intriguing clues fans will want to pay attention to:

I've talked about the parallels between the character arcs of Sansa and Cersei before, but this trailer makes those clear, opening with a 15-second unbroken shot of the young Stark woman in a similar way that the first trailer opened with a heavy focus on the newly crowned Queen of Westeros. It seems like one focus of Season 7 will be the duality of these two strong women — one in the North, one in the South — who are tired of watching incompetent men rule and have decided to take matters into their own hands.

After about 45 seconds of table-setting establishing shots, the trailer delivers its first bit of true intrigue: a monologue delivered by Jon Snow as Daenerys arrives at her new base of operations, Dragonstone (formerly occupied by Stannis Baratheon). "For centuries, our families fought together against their common enemy, despite their common differences, together. We need to do the same if we're going to survive." But who is Jon talking to?

A popular fan theory posits that Jon and Dany will eventually marry and rule the Seven Kingdoms together — the titular "ice" and "fire" of the book series. But their initial meeting is likely to be much less friendly than that. The Starks and Targaryens have long had trouble; the King in the North was one of the last to bend the knee to Aegon the Conqueror, and Ned Stark was an integral figure in Robert's Rebellion, which deposed Dany's father, the Mad King Aerys. So Jon is unlikely to be talking to Dany about their families fighting alongside one another for centuries. (Plus, the camera cuts to Dany's face just as Jon says "common enemy.")

So who else could Jon be allying himself with? The family that the Starks most commonly fought alongside were the Baratheons, but they're all dead… right? Well, there's at least one bastard offshoot of the family still rowing his little rowboat out there somewhere. Could Jon be making a pact with Robert Baratheon's son Gendry to challenge Cersei's claim to the Iron Throne?

3. The House On The Rock

While this shot of Grey Worm nodding at someone off-camera may seem innocuous at first, what it portends could be massive. If Dany wants to strike at the heart of the Lannister family, what better way than to sack their ancestral castle of Casterly Rock? The show hasn't taken us there yet, but this could very well be a scene of the Unsullied arriving to take the castle by sneaking underneath it through that cave in the background. After all, Tyrion once revealed that his first job was when Tywin put him in charge of all the drains and cisterns within Casterly Rock. If anyone knows a secret way in through the tunnels, it would be Dany's Hand.

Although your eye may be distracted by the coordinated movements of the assembled archers, the more interesting part of this shot is in the background: Jaime, with Bronn next to him, shouting orders at the Lannister army. Is he defending Casterly Rock or King's Landing? Hard to say, but if the archers are aiming at the sky, I hope Jaime brought some ice for the epic burn he's about to receive from Dany's trio of dragons.

5. Journey To The Past

Although Bran already received the information that everyone was waiting for at the end of Season 6 — that Jon Snow is actually the son of Lyanna Stark and Rhaegar Targaryen — it seems that his journeys into the past are not yet at an end. What further revelations might await in the cloudy history of the Seven Kingdoms? Hopefully something that will help his brother Jon defeat the Night King once and for all.

(It's also nice to see that Bran has received two upgrades: a wheelchair to replace his sled, and a new companion to replace the fallen Maester Luwin, Three-Eyed Raven, and Hodor — presumably Maester Wolkin, the adviser serving Winterfell under the Boltons and now presumably serving the Starks.)

The new trailer features plenty of brief shots of fan-favorite characters, including a snowbound Hound and a horseback Arya. But the most eyebrow-raising cameo is of Beric Dondarrion, the leader of the Brotherhood Without Banners and the only character other than Jon Snow who has been brought back from the dead. His flaming sword will almost certainly come in handy when fighting armies of wights. But could it also be a hint that there's more to Beric than meets the eye?

Viewers and readers alike have long been trying to piece together clues to prove that Jon Snow is Azor Ahai reborn… but what if the real Prince That Was Promised has been under our noses this whole time: the one we already know wields a flaming sword?

In this shot, viewers finally get a sense of the sheer size and might of the Iron Fleet as it sails into Blackwater Bay, the Red Keep and all of King's Landing spread out before it. But is Euron "Crow's Eye" on his way to lay siege to the capital? Or is his purpose perhaps less nefarious — say, wooing the Queen of Westeros and brokering a marriage alliance between the Lannisters and the Iron Islands in order to face the incoming threat of Daenerys together?

8. Open The Gates And Seize The Day

Lending credence to my earlier Casterly Rock theory, here the trailer provides a shot of Unsullied soldiers rushing into a castle as the gates swing wide open. But what's most interesting about the shot is who's opening the gates. They aren't being bashed down by a battering ram, but rather opened from the inside by other Unsullied — the ones led by Grey Worm, who infiltrated the castle through the sewers, presumably. (This is a repeat of the exact same trick Dany's army pulled to sack the Yunkai way back in Season 3.)

Harking back to that shot of Jaime shouting orders at Lannister soldiers earlier in the trailer, here the trailer provides another shot of Jaime, presumably on the same battlefield — except this time everything is on fire, nobody else seems to be alive, and Jaime is charging to face the enemy alone. Could this be the end of the Kingslayer? (For that matter, could this be the end of Bronn, since he was beside Jaime earlier in the sequence and is nowhere to be seen here?) Say it ain't so!

Although it's initially unclear whether this is a sequence of Dany's fleet being destroyed by Euron's flaming catapults or Euron's fleet being destroyed by Dany's fire-breathing dragons, the look on the Greyjoy siblings' faces makes it pretty clear. That look of shock and awe could only belong to someone watching a trio of dragons unleashing their full fury for the first time. And since we've already seen Drogon, Rhaegal, and Viserion destroy one fleet in Slaver's Bay, the question remains: How does Euron — or anybody else, for that matter — hope to survive against the Mother Of Dragons?

There's one curious detail in this montage of armies assembling in both the North and the South: While Jon Snow faces down a massive horde of wights with appropriate despair, several men can be seen fighting alongside him… including one man the right wielding a flaming sword. Beric Dondarrion's last known location was in the Riverlands, where he ran into the Hound at the end of Season 6 and announced his intention to march North and face the "cold winds" that were rising.

Apparently the outlaw knight's travels take him very far North — beyond the Wall, where hopefully he will be instrumental in helping Jon out of this sticky situation. (It certainly can't hurt to have a seemingly immortal man on your side, especially when you yourself have personal experience with resurrection.)

Earlier, I wondered how anyone could hope to stand against the might of three dragons. But from this brief shot of Euron — the only glimpse of the Greyjoy king in the trailer — it's clear that the Crow's Eye doesn't intend to go down without one hell of a fight, even while his fleet burns to ashes around him. Actor Pilou Asbæk has already teased that in Season 7, Euron will make Ramsay Bolton "look like a little kid" by comparison. Either this particular battle happens late in the season, after Euron has exhibited his villainous side… or Euron somehow survives this encounter and becomes an even more dangerous foe, as a proud king without anything to lose.

While a popular fan theory claims that the Starks will end up fighting amongst themselves as Jon and Sansa vie for power, the end of the new trailer offers a bit more hope for Westeros' most beleaguered family. The footage begins with a shot of Sansa, and it ends with a Sansa voiceover: "When the snows fall and the white winds blow, the lone wolf dies… but the pack survives."

This is a direct quote spoken by Ned Stark in the first novel in the series, although it didn't make it to the screen back in Season 1. In the book, the patriarch spoke the words to Arya to convince her to be nice to her sister. The fact that Sansa is speaking it now could mean that she intends to shake off the manipulations of Littlefinger, put aside her differences with Jon, and present the Starks as a united front against whichever enemy comes their way.

Or, given that the trailer ends with a shot of Jon, alone, facing an army of wights… it could just mean that this particular "lone wolf" is about to die.

Will Jon Snow die in Game Of Thrones Season 7? It seems unthinkable that the story's most noble hero will perish before the final season… but as the show approaches its endgame, all bets are off. Find out who lives and who dies when the new season premieres on Sunday, July 16.