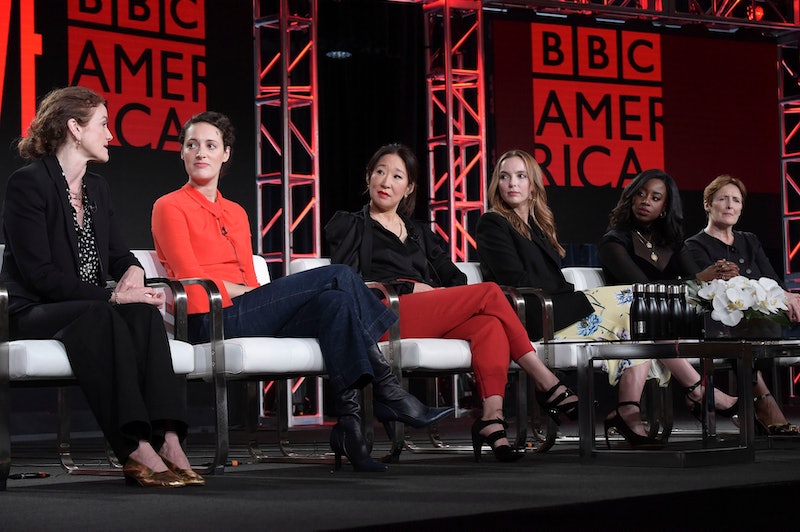 It feels like a really good time to be a woman in TV right now. With the massive success of Line of Duty, Fleabag, MotherFatherSon, and Killing Eve (to name just a few), it would seem that women are increasingly being given varied, three-dimensional roles. Two of the most exciting women in TV at the moment are Sandra Oh and Phoebe Waller-Bridge. Working together to bring us the awesome Killing Eve, I, for one, am obsessed with them. And in an interview with Elle magazine, Waller-Bridge revealed Sandra Oh wanted to "live in the vagina" of her co-stars. While this might sound a little unorthodox the reasoning will probably have you shouting "same!"

Killing Eve returns to BBC America on April 7, which means it is only a matter of time until the completely addictive drama between Villanelle (played by the sensational Jodie Comer) and Eve (played by Oh) returns to our screens in the UK.

The Independent reports that, in an interview in the May issue of Elle magazine, Waller-Bridge revealed that had writte a "love letter" of sorts to Oh. Waller-Bridge told Elle: "[S]he wrote back to me and said, 'I want to talk about your heart, your vagina and your ideas. When I work with women, I want to live in their vagina for the year.'" To be honest, working around such strong, inspiring, intelligent women would make anyone want to keep them as close as possible.

And it would appear Waller-Bridge was game. "I was like, 'the door is wide open, Sandra, please come running in,'" she reportedly told Elle. It's impossible not to love Oh and Waller-Bridge. The more you hear about them, the better they get.

Both Oh and Waller-Bridge have received massive critical acclaim for series one of Killing Eve. In 2019, Oh won a Golden Globe, a Screen Actors Guild Award, and a Critics Choice Award for her part as Eve. Waller-Bridge also won the Gotham Independent Film Award for Breakthrough Series Long Form.

The internet went totally wild when it was announced in April 2018 that Killing Eve would be returning. So far, there has been no announcement of a release date in the UK. However, the trailer for the second series has been released and, as you can imagine, it looks as stylish and thrilling as the last.

Speaking about the return of Killing Eve, Director of BBC Content Charlotte Moore said in a statement: "A truly genre-busting series that's had viewers hooked and craving more, thanks to the distinctive voice of Phoebe Waller Bridge brought to life by an incredible cast. We’re really excited to have it back on the BBC next year."

One of the most powerful things to watch is strong, successful women supporting one another and creating epic pieces of work. Waller-Bridge is riding the wave of much-deserved success right now as she has also got the nation completely hooked on the second season show she both wrote and starred in, Fleabag. It gives me all the joy that Oh and Waller-Bridge are so tight and, along with Comer, they are a complete dream team. I cannot wait to see the return of Killing Eve.