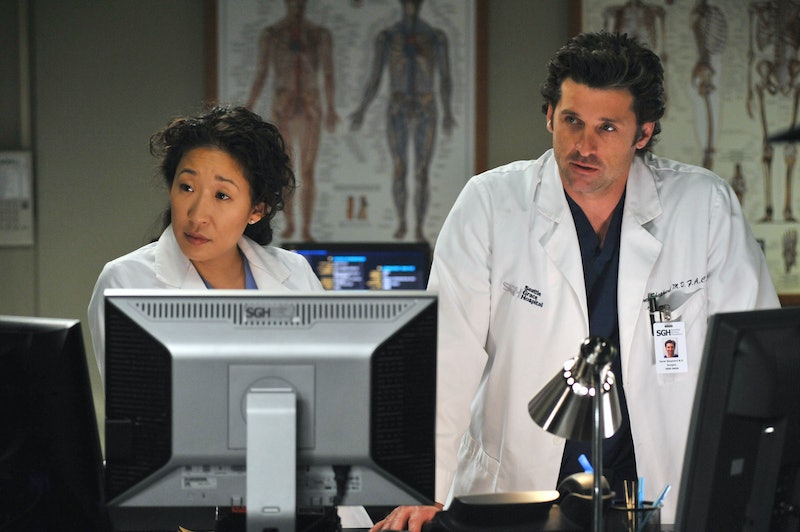 It's been years since Cristina Yang and Derek Shepherd shared the screen together — until now, that is. Sandra Oh and Patrick Dempsey had a mini Grey's Anatomy reunion, of sorts, by joining forcing with several other beloved TV doctors for a special PSA to honor all the real-life healthcare workers who have bravely put themselves on the front lines during the coronavirus outbreak. Former House doctor Olivia Wilde kicked off the tribute video, which she uploaded to Instagram, and proceeded to introduce some of the biggest names in fake medicine who wanted to say a few words to the real medical heroes out there.

“The closest… I’ve ever come to being a doctor is putting on a costume,” stated Wilde, who portrayed Thirteen on House from 2007 to 2012. “And while it is close, it is not quite the same. I just want to say thank you to all the real healthcare heroes out there.” From there other notable actors took a turn saying a few words, including Doogie Howser, M.D. alum Neil Patrick Harris, Scrubs stars Zach Braff, Sarah Chalke, and Donald Faison, as well as Wilde’s former House co-stars Lisa Edelstein, Jennifer Morrison, Omar Epps, Kal Pen, and Peter Jacobson — and many, many more.

Unfortunately, neither Dempsey nor Oh are shown speaking directly to each other since their messages were recorded at separate locations, but it should still bring a smile to every Grey's fans' face to see these two joining forces again for a good cause. And they aren't the only Grey's alums who participated. Their fellow costar Kate Walsh, who played Derek's ex-wife Addison Montgomery.

Dempsey's beloved Grey's character met a tragic fate back in 2015, which pretty much ruled out any possible cameos he could make in the future. However, Oh's Yang is still alive and well and talked about often on the series, leading many fans to hope that she'll return some day for a visit. So while this PSA video may not be precisely the type of Grey's Anatomy reunion you'd had in mind, it's definitely the next best thing.

More like this
Vanessa Hudgens Proves She's Always A Wildcat At This 'High School Musical' Location
By Alyssa Lapid
The Star Of 'Ms. Marvel' Has A Legendary Letterboxd
By Gretchen Smail
Natalia Dyer Opened Up About Steve & Nancy’s “Lovely” ‘Stranger Things’ 4 Dynamic
By Grace Wehniainen
'Friends' Creator Marta Kauffman Opened Up About Misgendering A Guest Character
By Grace Wehniainen
Get Even More From Bustle — Sign Up For The Newsletter