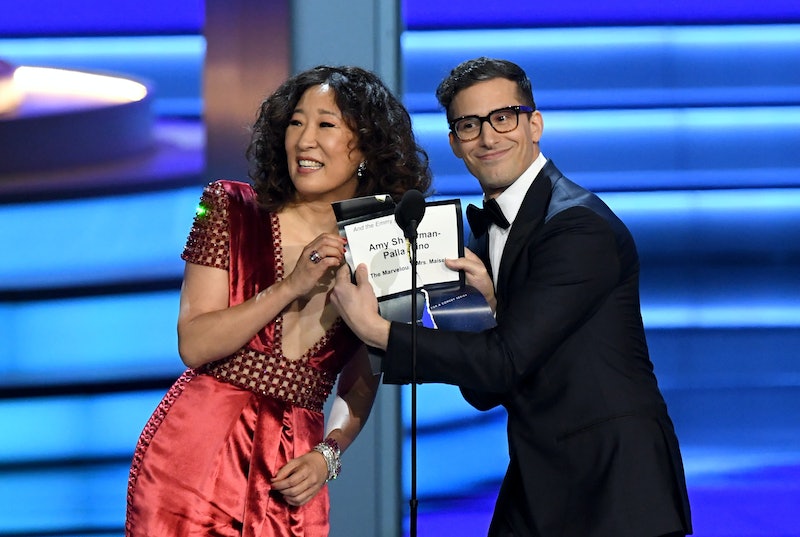 Oh, what a difference a couple of months make! At this year's Emmys, Sandra Oh was hilariously presenting the award for Outstanding Directing for a Comedy Series with Andy Samberg and making history as the first Asian woman to be nominated for Lead Actress in a Drama. Next month, Sandra Oh and Andy Samberg will co-host the 2019 Golden Globes and once again, she'll make history. She's the first Asian women or man to ever host the Golden Globes. In fact, Oh's the first Asian person to host any of the major awards shows, including the Oscars, the Emmys, and the Grammys.

On Jan. 6, Oh and Samberg will take the stage at the Beverly Hilton as the hosts of the Golden Globes. They're only the second duo to get the gig; Tina Fey and Amy Poehler were the first.

“Sandra and Andy are the perfect choices to host this world-class event,” Paul Telegdy and George Cheeks, co-chairmen of NBC Entertainment told The Hollywood Reporter. “They bring wit, charm and style to a room filled with the very best of film and television. It’s sure to be another unforgettable fun-filled night.”

For most of its 76-year history, the Golden Globes hasn't had a host. In total, only seven different people have hosted 10 Golden Globes broadcasts, all but one of which took place in the past eight years. Only, three women have ever hosted: Janine Turner co-hosted with John Larroquette in 1995; Fey and Amy hosted three times in a row from 2013 to 2015. No person of color has ever hosted the Golden Globes.

It was announced just yesterday (Dec. 4) that comedian Kevin Hart will host the 2019 Academy Awards, he's only one of six Black performers to host the show in its 91 years. But the Oscars have never had an Asian man or woman host the show. They've actually only had two women of color host the awards: Diana Ross and Whoopi Goldberg, who hosted four times throughout the '90s and once in 2001. The Emmys also have never had an Asian person as host and only one woman of color has hosted. That would be Oprah, who co-hosted with Michael J. Fox and Paul Reiser in 1996.

It's why it's worth celebrating the unexpected choice to have the Killing Eve star host alongside Samberg, who hosted the 2015 Emmys. Unexpected not just because of her race and gender, but because hosts of these awards shows are often comedians like Samberg who get their start in standup or SNL. For example, out of the seven people who have hosted the Golden Globes, half got their start as a Not Ready For Primetime Player.

Clearly, Oh is breaking barriers all around and hopefully encouraging other awards shows to start thinking outside the box of what makes for a good host. For instance, a good host might be someone who is a very good awards show presenter, which Oh and Samberg were at the Emmys.

In September, the comedy duo no one knew they wanted took the stage and did a bit in which Oh ripped the winner's envelope and had to improvise. "The winner is La La Land!" she shouted as a throwback to the 2017 Oscars Best Picture envelope fiasco. No surprise, the crowd cracked up.

Some at the time even tweeted that the best part of the Emmys was Oh and Samberg. Others might have wished that Oh could host an awards show. Who knew that it would really happen — and so soon? It's why so many people on Twitter couldn't help but tweet their excitement over Oh being chosen.

"Sandra Oh is all I need to know," film writer Candice Frederick tweeted when the Golden Globes hosting news dropped. While a fan named @MisfitHarley tweeted, "Sandra's monologues on Grey's were always such knee-slappers and it's time for the world to know her funny!!!"

Another fan predicted that Oh's hosting gig could be a good omen for her winning Best Actress for her role on Killing Eve. "Remember when Amy Poehler won a Golden Globe for her role in Parks and Rec when she was co-hosting with Tina Fey?" @stvetonys asked, "the same will happen to Sandra Oh next year."

Just another reason to tune into the Golden Globe nominations on Thursday (Dec. 6) to see if Oh gets a much deserved nomination for Killing Eve.

"I AM HERE FOR THIS. YES," Bustle writer Olivia Truffaut-Wong tweeted, adding the hashtag #ItsAnHonorJustToBeAsian a callback to another Oh joke from the Emmys.

And Oh understands the excitement of seeing people who look like her on TV. At the Emmys, Oh talked to Entertainment Weekly on the red carpet about making representation history, saying, "If there's a way of saying to a young girl, 'You can do this, you can be a part of culture in this way,' I hope to be a part of that." Now, once again, she is.