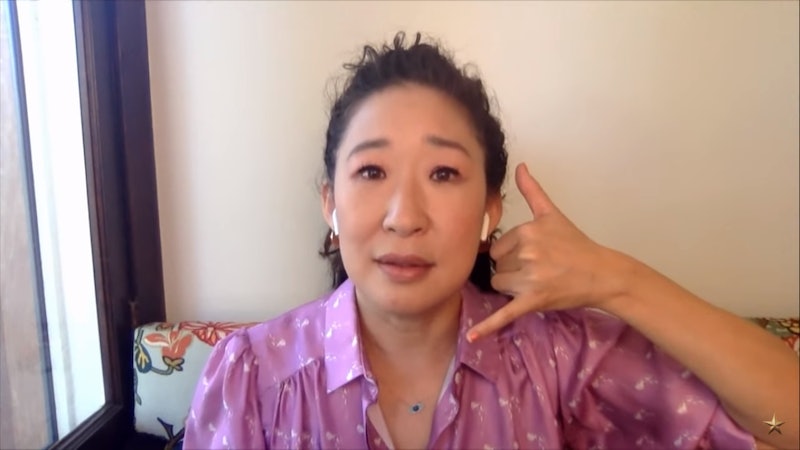 Vice Principal Gupta lives on: Sandra Oh recreated her iconic Princess Diaries scene — and proved that we need the third film now more than ever. The Killing Eve actor dialed into The Graham Norton Show for a virtual interview and reminisced about the 2001 film that follows a San Francisco teen (Anne Hathaway) who learns she’s a princess and heir to the crown of a small European town. Reflecting on being typecast as detectives, teachers, and doctors during the infancy of her career, Oh revisited her role as a vice principal and recited one of the film's most revered scenes: Gupta, on the phone, declaring, “The Queen is coming.”

“With actors, you can go through seasons of things: at one point, from the early to the mid ‘90s, all I played was detectives and then I got a lot of teachers,” Oh said. “And then I moved into doctors… and then a lot of people were wanting me to play psychiatrists and therapists, and then I would have to be very, very judicious of how many doctors I would play, but yes, this was the character of a vice principal.” She said of the iconic telephone scene, “I haven’t seen it since but I remember it.” Holding her hand up to her ear like a phone, Oh said, “Uh huh. Uh huh. Uh huh. The Queen is coming.”

Based on Meg Cabot’s novel series, The Princess Diaries was followed by a sequel, The Princess Diaries 2: Royal Engagement, in 2004. Hathaway and Julie Andrews reprised their roles as Mia Thermopolis and Queen Clarisse Renaldi, respectively, in the film that followed Mia as she searched for a husband in order to become queen of Genovia. In 2016, the late Garry Marshall, who directed both installments, revealed a third film was in the works. “I was with Anne Hathaway a couple weeks ago; it looks like we want to do Princess Diaries 3 in Manhattan,” Marshall told PEOPLE. “Anne Hathaway is very pregnant, so we have to wait until she has the baby and then I think we’re going to do it.”

Two years later, Hathaway revealed that there was, in fact, a Princess Diaries 3 script during an appearance on Watch What Happens Live With Andy Cohen. She told Cohen, "There is a script. I want to do it. Julie [Andrews] wants to do it. Debra Martin Chase, our producer, wants to do it. We all really want it to happen.” Hathaway continued, “It's just we don't want to do it unless it's perfect because we love it just as much as you guys love it. It's as important to us as it is to you and we don't want to deliver anything until it's ready, but we're working on it."

Whichever stage the Princess Diaries 3 script may be in, here’s to hoping Oh will reprise her scene-stealing role.

More like this
Anne Hathaway Shared A "Thrilling" 'Princess Diaries 3' Update
By Darshita Goyal
The 'Scream 6' Trailer Shows Off Hayden Panettiere's Return & Ghostface In NYC
By Jack Irvin and Jake Viswanath
12 Years Ago, Austin Butler Manifested His Oscar Nom In This Disney Movie Scene
By Jake Viswanath
Sandra Bullock’s Razzies Speech Proves She’s The Ultimate Miss Congeniality
By Sam Ramsden
Get Even More From Bustle — Sign Up For The Newsletter
From hair trends to relationship advice, our daily newsletter has everything you need to sound like a person who’s on TikTok, even if you aren’t.