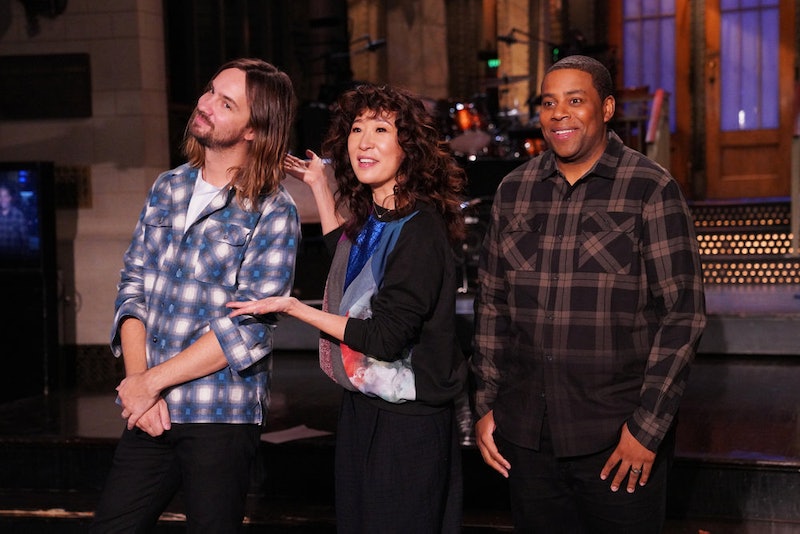 Despite Sandra Oh's decades-long career in acting, it was the first time she was able to take the Saturday Night Live stage and do her thing. Before she starting donning the wigs and costumes of the evening's characters, Sandra Oh's Saturday Night Live monologue gave her an opportunity to get personal with the audience and do something that she doesn't usually get to do — brag.

Oh explained that her identity as an Asian-Canadian combines possible two of the most compliment-averse cultures in the world; she joked that the only appropriate response for an compliment if you're a Canadian is to say "sorry," and that as an Asian women she has become a master in deflecting any compliments she does receive. However, part of her new identity as an American citizen — a designation she celebrated her one-year anniversary of onstage — meant embracing more typically American ideals of self-confidence, including the right to brag about one's own accomplishments. For help, she brought out the most brag-worthy person on the SNL cast — Leslie Jones, who explained that "it's not about the brag, baby, it's about the swag."

Sandra Oh didn't quite get the hang of it, first bragging that she had cried "more than any person you've ever met."

While Oh may have had trouble bragging at the top of the show, by the end of the night it seemed absurd that Oh wouldn't brag about bringing a smorgasbord of unique characters to the stage. Oh's roles throughout the evening included an uptight translator for Kim Jong Un, a romantic British woman forced to suffer the pain of watching the two loves of her life duel over her (as well as the pain of bullets accidentally hitting her in the arms), and perhaps most memorably, the Four Loko-guzzling mess of a human with an eternally broken arm known only as Tishy.

While she might be best known as Cristina Yang in Grey's Anatomy or as Eve Polastri in Killing Eve, Oh was pretty solid on the SNL stage — it can't be easy to just jump into sketch comedy, but she somehow managed to do it.

Oh also contributed to a growing history of accomplished Asian hosts guest starring on the series. Oh is only the fourth person of Asian heritage to host Saturday Night Live, following in the footsteps of Jackie Chan and Lucy Liu, who both hosted episodes of their own in 2000, and Awkwafina who hosted a Saturday Night Live episode in 2018. Her ultimate brag came at the very end of the show, where she donned a T-shirt that had the quote "It's an honor just to be Asian" written on it attributed to herself. Oh may be the latest in a growing line of Asian hosts on Saturday Night Live, but her hosting performance may simply be the first in a new chapter of Oh's career that could see her delivering more comedic performances and possibly returning to Saturday Night Live in the future.