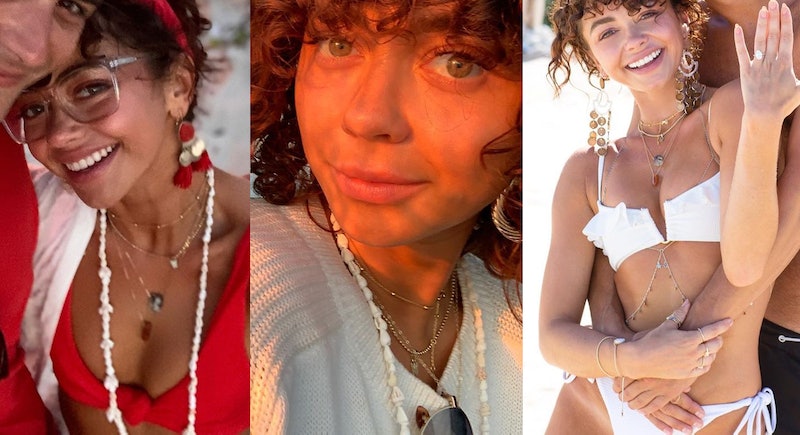 Everyone needs a layer-friendly choker for the summer, and it appears that Sarah Hyland has found the perfect one. Sarah Hyland's Astrid & Miyu’s Basic Large Beaded Choker has been her go-to necklace for a month straight, proving just how versatile the piece is. And the best part is that it's only $83. The Modern Family actress has worn it during everything from iced coffee runs to getting engaged on the beach.

Astrid & Miyu is a London-based jewelry brand that has quickly built a cult status among celebrities and influencers alike since its launch in 2012. Its designs have been spotted on A-listers like Georgia May Jagger, Pippa Middleton, and Jessica Alba, attesting to its quality. Best known for its signature ear stacks, Astrid & Miyu's collections are inspired by its hometown, London, and the brand pulls inspiration from art, architecture, and the quirky people the team meets.

The story behind the name is just as fun as the jewelry. According to Connie Nam, the CEO who first launched the brand from her apartment in Notting Hill, the name is based on two fictional characters ‘Astrid’ and ‘Miyu’ who are behind every marketing campaign and product.

"Both come from the East and West respectively, have differing personalities but are now best friends and have relocated to London. Astrid is an introverted, edgy artist from Sweden with a musician boyfriend residing in Camden. Miyu is an extroverted socialite from Japan who is living her single life to the fullest living in Shoreditch," Nam tells Bustle. This captures how the jewelry is for absolutely everyone.

The necklace that has caught Hyland's attention for all of July is the Basic Large Beaded Choker in Gold. The dainty necklace is made from sterling silver that is plated in gold. It features a delicate chain with bead accents, and it has a five centimeter extender that lets you play with the length depending on what your outfit needs.

Hyland was first spotted wearing the Astrid & Miyu choker while out enjoying the Fourth of July weekend on the beach with her then-boyfriend, Wells Adams.

Then on July 13, when Hyland was on the island vacation where she and Adams would get engaged, the actress wore the choker non-stop. But she layered the beaded choker with a series of different necklaces to keep it fresh. Below Hyland mixed her Basic Large Beaded Choker with a shell necklace and longer gold chains.

She also wore the necklace with her bikini body jewelry right after her engagement.

The choker necklace was also spotted in the video where Hyland gave Instagram a close up of her blinding engagement ring.

Hyland continued to wear the necklace after she came back to Los Angeles, and the gold-plated choker made its rounds on her Instagram Stories. The most recent blimp was on July 26, when Hyland shared a photo of herself falling asleep after waking up in the early morning.

Nam gets why Hyland never takes off the beaded necklace. "The Basic Large beaded chokers is one of those essential necklaces that every girl needs. It literally goes from adding a real simple touch to your classic white tee or is the perfect starting point for a layered up necklace look meaning that you never have to take it off," she says.

"It’s been so exciting to see A&M become a jewelry essential on the likes of Sarah Hyland, Whitney Eve Port, and Jessica Alba. Again it comes down to the amazing quality and how versatile our necklaces are. Customers can mix and match different necklace lengths and styles to create a perfectly accessorized look which takes them through season after season due to their classic design," Nam says.

If you have been looking for the perfect, timeless choker necklace, then Astrid & Miyu has you covered.