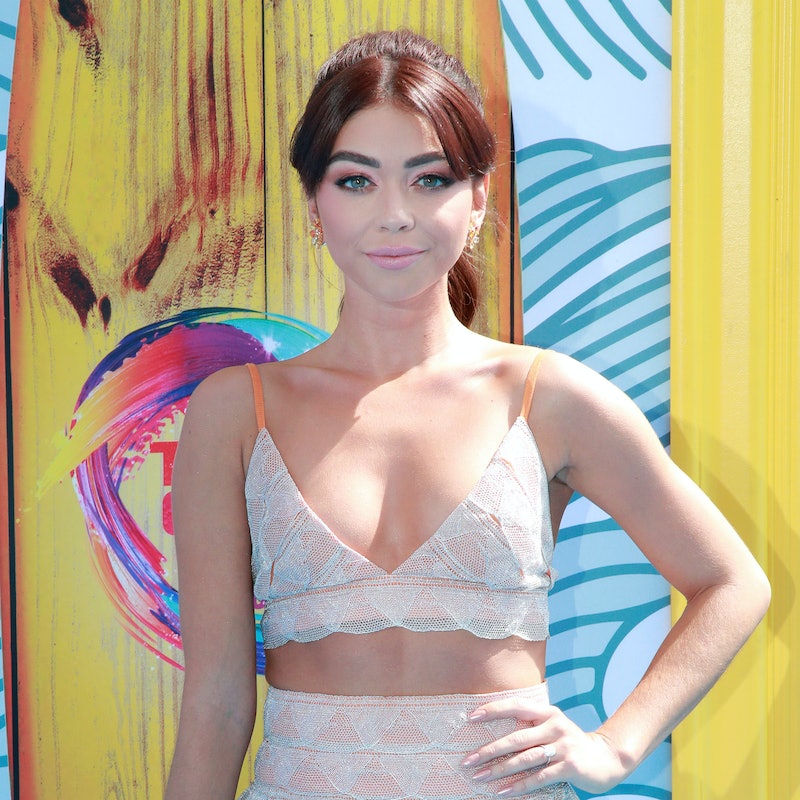 This Modern Family star isn't afraid to embrace her true self. On Monday, Sarah Hyland posted a Teen Choice Awards Instagram explaining why she decided to forgo Spanx at the 2019 event. Hyland's reason behind ditching shapewear should be applauded. Really, everyone should give Hyland a standing ovation for her confidence and the self-love she practices.

Next to a photo of Hyland performing with Jordan McGraw at the TCAs, the actor first opened up about her experience singing for the first time live on TV. "Yesterday I had my first nationally televised performance of a song I did with the amazing @jordanmcgraw," she wrote. "I was terrified. I was excited. There was a PHENOMENAL crowd supporting us the entire way through. Thank you so much to everyone who watched! Thank you @teenchoicefox for having us!!"

Then, Hyland revealed she didn't want to wear Spanx for a respectable and applaud-worthy reason. She explained, "And a final thank you to my ever changing self confidence for making the decision to not wear spanx and let my KUPA (kidney upper p*ssy area) shine like the badass b*tch she is."

Yes, Hyland. Yes! She decided she simply wanted to let her amazing self shine all on its own. It's important to note that even if she decided she wanted to wear shapewear that wouldn't make Hyland any less of a person. What matters is that she was happy and feeling good. At the TCAs, she was clearly comfortable and didn't want to wear Spanx, so she didn't. Good for her.

Unfortunately, following her duet with McGraw, many individuals questioned if Hyland was pregnant. First of all, just because a woman's stomach isn't flat or resembles a so-called baby bump doesn't mean she's pregnant. Just because Hyland's body looked different than what people are used to seeing doesn't mean she's expecting a child with her fiancé Wells Adams.

People's bodies change and women's bodies are scrutinized way too often. Sometimes a woman's stomach will protrude a bit because she's bloated or she just ate a big meal or because that's just how her body is, among many other reasons.

It's also important to note that Hyland has had two kidney transplants and faced many health obstacles over the years. So the fact that she felt comfortable enough to step onto a stage in front of a massive audience without Spanx shows how far she's come in practicing self-love and becoming more confident in herself.

Hyland previously discussed her decision to wear Spanx to hide her "KUPA." Actually, she received backlash for sharing an Instagram of herself at February's Vanity Fair Oscars Party and captioning it, "#funfact I’m wearing TWO pairs of Spanx. Why diet? When you can just hide it!"

In response to many people who felt like Hyland was sending the wrong message, one fan defended her by tweeting, "If you’re trying to hide the bump from your transplant, forget it. I’ve been trying for years!! Stay healthy. #kidneystrong #transplantssavelives." Hyland replied, "Someone gets it!!" The actor also later responded to a now-deleted tweet, "When you have two kidney transplants and are on steroids for life get back to me."

Another reason people should be careful about questioning someone's body is because someone's physical appearance could've changed due to health-related reasons. Basically, it's all about being respectful and kind. It seems like Hyland is in a really good place and is embracing who she is post-surgeries. If anything, everyone should be uplifting her during this moment rather than questioning if she's having a child. It's wonderful to that Hyland put her "KUPA" on display for the world to see. Her self-love and confidence is something to be admired.