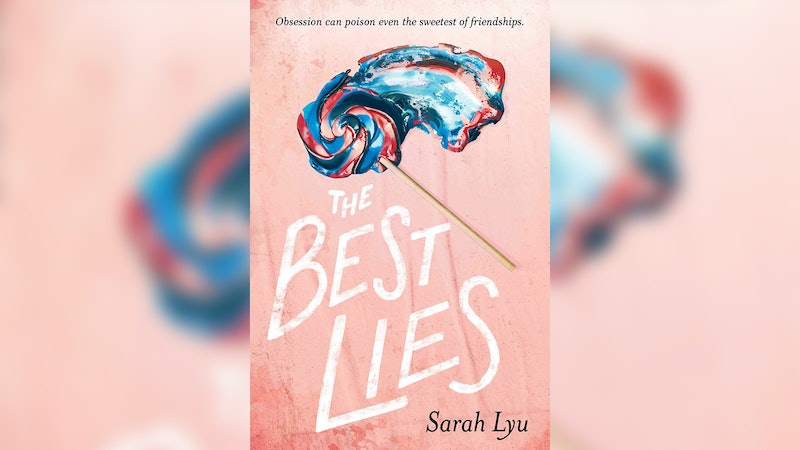 The scariest book Sarah Lyu ever read was Harry Potter and the Chamber of Secrets. "I was 11," she tells Bustle via email, "and when I got to the end, I had to keep putting it down and running to my mom to tell her how I scared I was. I've read plenty of terrifying books since then, but I'll never forget that heart-pounding fear when you're a kid and you read something really scary for the first time."

Now, Sarah Lyu is all set to bring that same sense of dread to a new generation of readers with The Best Lies, her YA debut, out now. "The experience of reading [Chamber of Secrets] and the Harry Potter series in general has really stuck with me because that’s what I hope to achieve with my work," Lyu says. "I hope The Best Lies delivers moments that keep readers on the edge of their seats."

The Best Lies definitely serves up the tension and fear Lyu experienced with Chamber of Secrets. The story centers on Remy Tsai, a recently heartbroken high schooler who falls head over heels for Elise, the rebellious, older girl she considers to be her soulmate. As the novel opens, however, Remy finds herself in the hot seat, questioned by police about the death of her new boyfriend, Jack, who has been shot by Elise.

"I haven’t really thought of the Harry Potter books as a mystery," she says, "but in retrospect, I do think that the series is a mystery."

Remy and Elise are the only two people alive who know what happened to Jack, but will they tell the truth to save themselves, or lie to save each other? As Remy recalls the hazy details of her friendship with Elise, her relationship with Jack, and the night that changed everything, The Best Lies keeps readers guessing who was responsible for what, right up to the novel's final moments. "[T]hat’s what I love so much about Remy’s story," Lyu says, "[that] she's sifting through her past and trying to determine what her truth is."

'The Best Lies' by Sarah Lyu

After finding out how much of an impact the second Harry Potter book had on Lyu, I wanted to know how much J.K. Rowling's fantasy series had shaped her choices as a writer, both of young adult literature and mystery fiction. "I haven’t really thought of the Harry Potter books as a mystery," she says, "but in retrospect, I do think that the series is a mystery, or that it has several elements of a great mystery at least.... [W]hile Chamber of Secrets might not have been the book that inspired me to become a writer, it played no small part either."

Eagle-eyed readers may spot a nod to Rowling's books tucked into The Best Lies. "I didn’t get a chance to pay proper tribute to the series in the book," Lyu says, "but I did throw in a quick reference, a moment when Elise... calls another girl they know a 'Hermione' to imply that she’s tame and boring. I wrote that part and didn’t think much about it until the manuscript came back from the copy editor who had written a note with receipts arguing that Hermione was anything but tame. I loved seeing that — it was honestly one of my favorite moments in working on this book."

Clearly, Harry Potter has been a huge influence, not only on Lyu, but also on many other writers and editors working today to make young adult literature. "The Harry Potter books were and continue to be a huge inspiration for me," says Lyu. "There’s also something so magical in a story and characters that everyone knows."

"At times in our friendship, my best friend and I would stay up talking all night and doing everything together. We called each other soulmates, and when we fought, it felt worse than any romantic break up."

Harry Potter wasn't the only sources of inspiration for The Best Lies, however. In an email to Bustle, Lyu names The Count of Monte Cristo by Alexandre Dumas, the Parker-Hulme murder, and Kill Bill, vols. 1 and 2 as major sources of inspiration. What readers may not guess, however, is that Remy and Elise's relationship owes much to Lyu's real-life experiences dealing with "the evolution of [her] relationship with [her] best friend."

"The complicated bond between Remy and Elise in The Best Lies differs quite a lot from ours in so many ways," Lyu says, "but the one thing it shares is the intensity. At times in our friendship, my best friend and I would stay up talking all night and doing everything together. We called each other soulmates, and when we fought, it felt worse than any romantic break up."

I think it's probably safe to assume that Lyu's best friend didn't shoot and kill her boyfriend, as Elise does to Jack in the novel. As The Best Lies shows, however, the kind of passion and intensity that Remy and Elise have between them isn't typically healthy in any relationship. Regarding her relationship with her best friend, Lyu says, "Things have changed over the years and we’re both in a healthier place now, but I really wanted to capture that feeling, what it’s like to find a friend who feels like home."

So now, with her first novel out in the world, what's next for Sarah Lyu? "Watching all the [Harry Potter] movies with my husband," she says, "since he hasn't seen them (I know, how dare he?!)." Lyu won't let Harry Potter stand in the way of her next book, however. "I’m also working on [a novel]," she told me, "about a group of Asian-American teens at an elite high school who decide to run a cheating ring!"