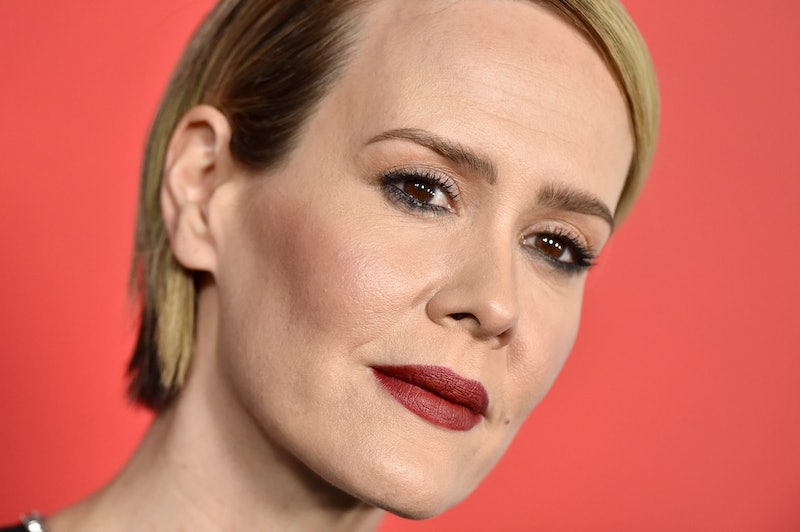 Proving that the franchise has more lives than Michael Myers, FX announced on Thursday that American Horror Story has been renewed through Season 13. That means there are at least three bloody installments of the anthology still to come. But that's not even the best part: a new report from Deadline revealed that Season 10 will herald the return of Sarah Paulson to the AHS franchise after the fan favorite sat out the Season 9 installment, American Horror Story: 1984.

The actor, who is currently prepping to play Linda Tripp in American Crime Story: Impeachment, told Deadline that series creator Ryan Murphy gave her the green light to confirm her highly anticipated return. "I did ask if Ryan if the question was asked to me, could I say that I was coming back, and he said 'yes. you could say.' So, yes I will be back on American Horror Story," Paulson said. In true AHS fashion, her return is the only thing FX has revealed about Season 10, so far, despite the new season being set to premiere later this year.

As exciting as Paulson's mysterious Season 10 role is, the news of the franchise's three-season renewal is even more surprising. Murphy previously hinted that the upcoming Season 10 could potentially be the show's last. "We're working on an idea for season 10 that I think people will love because it's about reuniting fan-favorite actors to come back — because it might be our last season," Murphy told Deadline in Nov. 2019.

He continued, "I’ve been quietly reaching out to various people. So far, everybody I reached out to said 'Yes' so that’s been great."

Fans no longer need to worry about the franchise signing off after Season 10, but it sounds like the season will still be full of fan favorites. Murphy declined to share who else he had reached out to, however, he did suggest that viewers look to Seasons 1-3 for a hint about which actors he could be contacting. "The people who helped build this show into what it is, who believed in it from the beginning, have been contacted and are interested," he told Deadline at the time.

As for whether or not the franchise will continue beyond Season 13, that seems unlikely, but never say never. For now, FX chief John Landgraf seems to think 13 seasons is perfect for the horror series. "Somehow it feels really poetic to me that 'American Horror Story' is going to have 13 seasons; that just felt right," he said, per Variety.

More like this
ITV's 'Maternal' Was Inspired By A Very Simple – & Unanswerable – Question
By Maxine Harrison
Shonda Rhimes Responded To The Surprise Exit Of A Day 1 'Grey's Anatomy' Figure
By Grace Wehniainen
'Succession' Season 4 Will Be An "Absolute Banger" According To Cousin Greg
By Bustle Staff
'Ted Lasso' Season 3 Might Be Its Last
By Zosha Millman and Grace Wehniainen
Get Even More From Bustle — Sign Up For The Newsletter
From hair trends to relationship advice, our daily newsletter has everything you need to sound like a person who’s on TikTok, even if you aren’t.