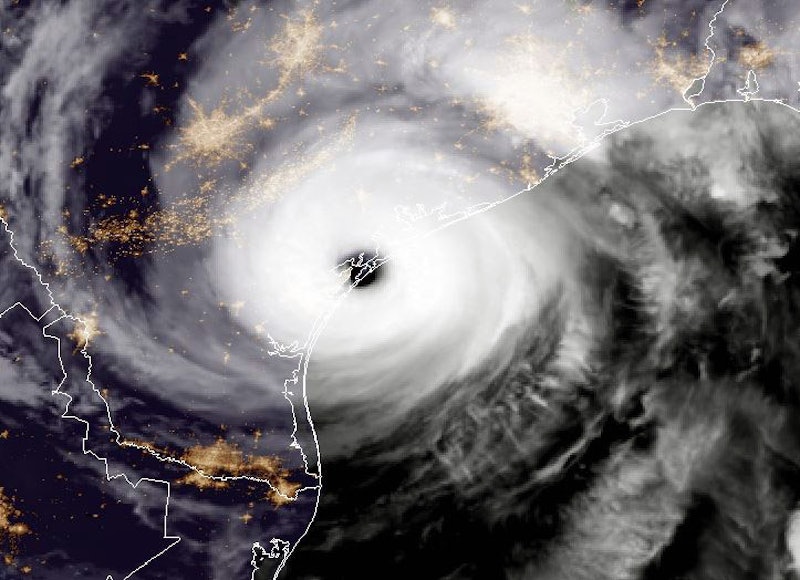 Although Harvey was a Category 4 hurricane in Texas on Friday night, it became a Category 1 storm the next morning. But in spite of this change in strength — the storm's winds went from 130 mph to 80 mph according to hurricane experts — weather forecasters have predicted that the storm will possibly lead to a storm surge and bring torrential rain. Now, with satellite images of Hurricane Harvey shared by social media users on Twitter, it is crystal clear how powerful and breathtaking this storm is.

The storm has been such a cause of concern for weather forecasters that The National Hurricane Center said that it would cause "life-threatening and devastating flooding." In some areas of Texas, the downpour from the storm is expected to cause up to 40 inches of rain which could wash away building signs and even prompt mandatory evacuation for locals.

In addition to that, there is a storm surge warning in effect for the Baffin Bay and High Island areas of Texas where it is predicted that the storm will cause a rapid increase in water. Weather specialists expect that the storm may leave some 1.3 million Texans without electricity due to power lines and trees struck down by its incredible winds.

Some have commented on the undeniable magnitude of the storm.

Images of the storm juxtaposed against Hurricane Katrina from 2005 revealed the similarities between both.

Another satellite image showed the storm making landfall in Texas. A landfall takes place when a storm enters land after being over water.

4. On The Texas Coastline

This satellite image showed the storm hovering over Texas' coast.

5. A Kind Of Satellite Image You "Don't Want To See"

Several commented on how alarming the images of Harvey were.

6. Watch As It Strengthens

This particular satellite image showed how Harvey took on even more strength. It's a menacing and intimidating visual worth looking at.

7. Inching To The Coast

Another image of Harvey on the coastline.

10. Hurricane Harvey In Its Category 4 Form

An image of a Category 4 Harvey over Texas.

11. Watch As Its Colors Intensify

Another image of Harvey gaining more and more strength.

Some believe that the Harvey will alter the shape of Texas' coast due to its strength.

Infrared imagery of Harvey showed how the storm approached the Texas coastline.

An image of Harvey from Friday noon.

Although Harvey has been repeatedly described as dangerous and potentially fatal, there's no need to panic. Locals have been provided ample information by the Texas Department of Transportation as to how they best prepare themselves for the storm and its aftermath.