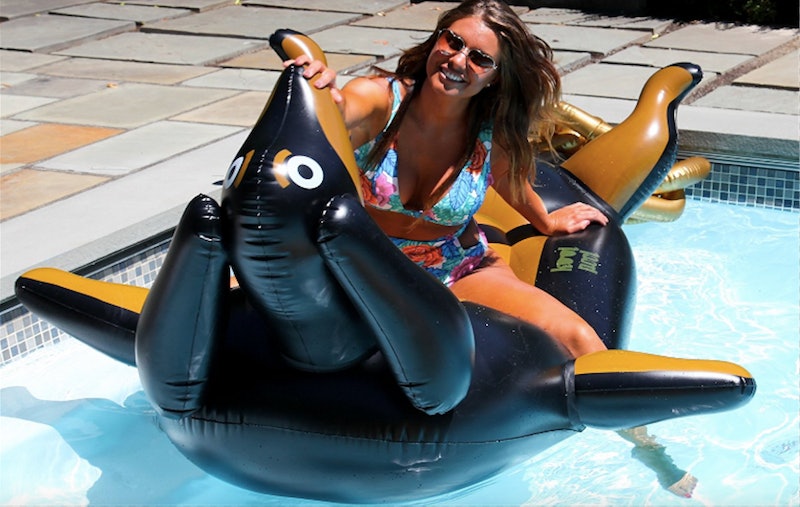 Amazon
By Callie Tansill-Suddath
May 8, 2018

It is no secret pool floaties have tickled the fancies of beach bums and those who prefer the pool alike in the US, but this latest trending float takes a page out of Europe's book. It's safe to assume Instagrammers all over the world are just as entranced by the prospect of floating in a giant inflatable, pink corvette as those in the US. But, are those in this country ready for a float that pays tribute to a distinctly Deutsch doggo? This giant weiner dog pool float does just that.

I have to say I'm pretty impressed with Europe's devotion to one of the smallest, and most comical of all dog breeds. Just last month I reported on a new museum that opened in Bavaria completely devoted to the breed called the Dackelmuseum. The museum boasts 4,500 items, all of which are from the curators' personal collections. If its not already, perhaps this pool float deserve its own little place in the museum.

The float is the work of company Kool Pool, which also produces aquatic accessories like an avocado float, a massive floating water slide, as well as some, erm, more nontraditional floats. Kool Pool truly has something for everyone.

According to its description on Amazon, the full name of the float is the "Giant Premium Inflatable Dachshund Wiener Dog Doxie Sausage Dog Lounger Pool Float Mattress" (a mouthful, eh?) It comes equipped with one cupholder, is made with "Insanely Durable 7P-Free PVC And Uses Eco-Friendly Screen Print Ink," and holds up to 300 pounds. Head to tail he's almost seven feet long, making him, per the website description "a true long-boy." Plus, they note, the float doesn't need to be fed or walked, and it does, in fact have a name: Link. I'm guessing it is a nod to a sausage link.

Now you might be wondering where this trend came from. Rafts, at least in their basic form, have been around for centuries. But not as a luxury, floatation devices were once upon a time used solely as safety devices.

Much of the modern fanfare around floaties can be traced back to none other than Taylor Swift. Back in 2015, Swift posted an Instagram pic of herself and then-boyfriend Calvin Harris cozying up in a giant inflatable swan. The swan float later made appearances on both of the Instagram accounts of Southern Charm stars Craig Conover and Kathryn Dennis. Emmy Rossum, two members of the Kardashian-Jenner crew, and my own personal style icon Zooey Deschanel also took a liking to the accessory. Bear in mind, this was all the way back on 2015, so the popularity of the pool float has only, one might say inflated since then. If you only have eyes for the swan, you can find it in white, black, gold, and silver here.

FUNBOY, the company behind the floatie that started it all, is also luxury float powerhouse responsible for the incomparable pink convertible pool float. It is the size of a queen-sized bed, has two cupholders, and an enormous front cooler for ice, drinks, and snacks. But, with a $128 price tag, the float embodies every part of luxury. The company also makes many of the floats you find at Urban Outfitters, namely the llama and yacht varieties.

Out of all the ones I have seen (trust me, I have seen a lot in these past few months) I can say with certainty my favorite is the aforementioned long pup, Link. Who needs unicorns when the best creatures on earth already exist? Some of them are even pocket-sized.

The Kool Pool Pup is available online from the company's website.