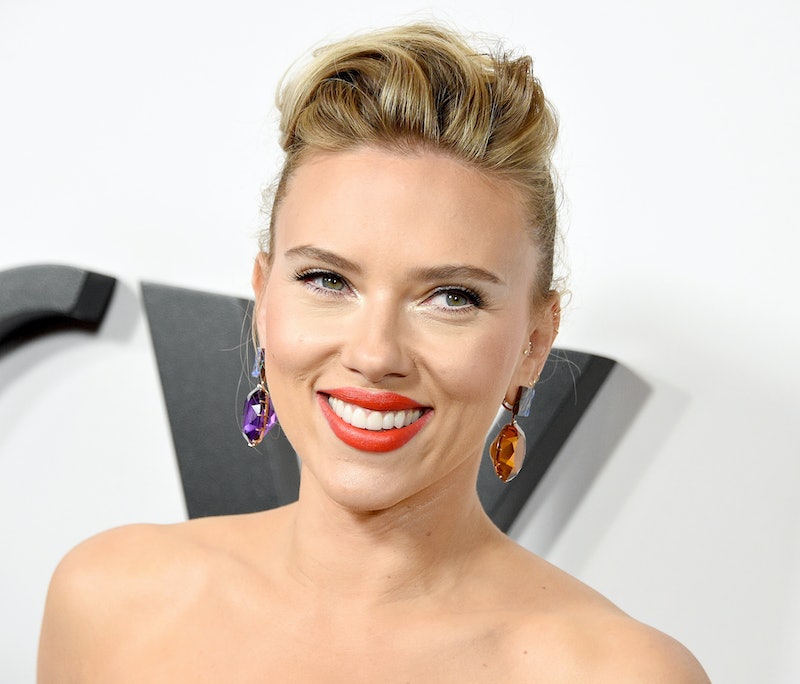 In the decade since Black Widow was first introduced to the Marvel Cinematic Universe, fans have been hoping to see the former assassin star in a solo film of her own. And it seems like it may be worth the wait. In a recent interview with Vanity Fair, Scarlett Johansson said the Black Widow movie will "elevate the genre," adding that she wanted to ensure that the ultimate movie was something "deep" and moving.

While speaking with the outlet for their annual awards issue, Johansson revealed that she was heavily involved in the pre-production process on Black Widow, which is currently slated for a May 2020 release. "I did not want it to be an origin story," she explained of the film, which will take place before the events of Avengers: Endgame. "I did not want it to be an espionage story. I didn’t want it to feel superficial at all. I only wanted to do it if it actually fit where I was with that character."

Johansson also added that she was "happy" with the way Endgame wrapped up Natasha's story, and so in order to return to the character, it needed to be for a worthy story.

"I felt that unless we got to something deep, then there was no reason to make it," she explained. "Because I did my job in Endgame, and actually felt satisfied with that. I would have been happy to let that be it. So there had to be a reason to do it other than just to milk something."

While she couldn't reveal very many details about the Black Widow film's plot, Johansson did tease that the movie will "elevate the genre" of the superhero movie. "The film talks about a lot of tough stuff. It deals with a lot of trauma and pain," she said, describing Natasha as an "empowering" character who has overcome a great deal. "And so by elevating the genre I mean I hope that it can be both explosive and dynamic and have all that great fun stuff that goes with the genre, but I hope that we can also talk about, you know, self-doubt and insecurity and shame and disappointment and regret and all that stuff too."

Her comments about "elevating" the genre seem more poignant in the wake of Martin Scorsese's criticisms of the MCU and superhero films in general. Describing the Avengers films as "not cinema," in an interview with Empire, the Oscar-winning director added, "it isn’t the cinema of human beings trying to convey emotional, psychological experiences to another human being." Johansson is among the many actors in the MCU who have defended the films against Scorsese's criticisms, but she told The Hollywood Reporter in early November that she sees some of his points as "valid" — especially when it comes to what kinds of movies are given the opportunity to be shown in movie theaters.

Though Johansson is right that there is "a place for all kinds of cinema," her descriptions of the Black Widow movie do imply that she's hoping the solo film will be a different kind of Marvel movie. Considering everything that Natasha has been through off-screen and before joining the Avengers, it makes sense that a Black Widow film would about her psychological journey just as much as her journey towards superheroism.