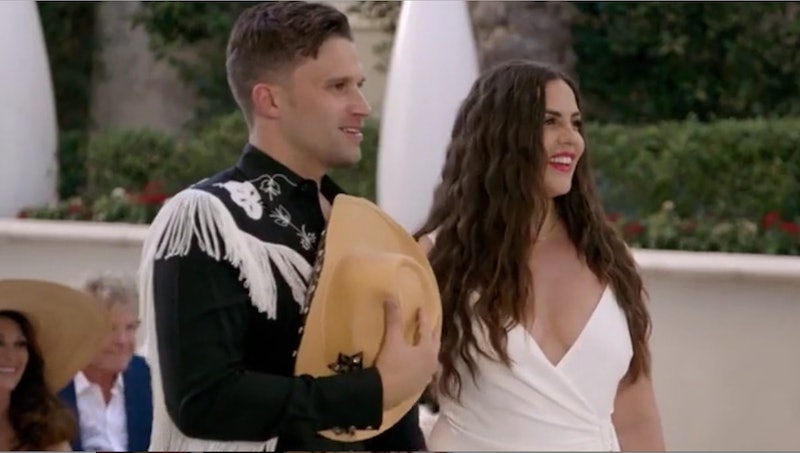 Though heading to Las Vegas usually means sloppy blackouts, potential cheating, and total chaos for the cast of Vanderpump Rules, during the show's April 14 episode, they all managed to keep things free of drama and one night stands (well, aside from Max). Weeks after Tom Schwartz and Katie revealed that they weren't legally married because Schwartz had lost their paperwork, the gang headed to Sin City to watch the two finally, officially tie the knot — this time not with an ethereal, woodsy ceremony, but the ultimate cheesy Vegas wedding. And to be quite honest, it was better than the first one.

Thanks to Lisa Vanderpump, the bride and groom were given the VIP treatment, from a private jet to a penthouse suite. But that was as close as they got to anything luxurious. Stassi and Tom Sandoval shared officiant duties as a sexy nun and blinged-out Elvis; Schwartz became a cowboy groom, with Katie as his glam rocker bride; Ariana was the cheesy tourist, Max was the eccentric flower girl, and Jax, Brittany, and Lala were... kind of underwhelming, frankly. Jax could have at least repurposed his '80s birthday costume.

In any event, Schwartz and Katie said "I Do" (again), they signed the legal documents (again), and a grand time was had by all...that is, until the next morning, when when Schwartz realized he lost their marriage license (again). What happens in Vegas, stays in Vegas... including the marriage certificate that Schwartz and Katie needed to take back home.