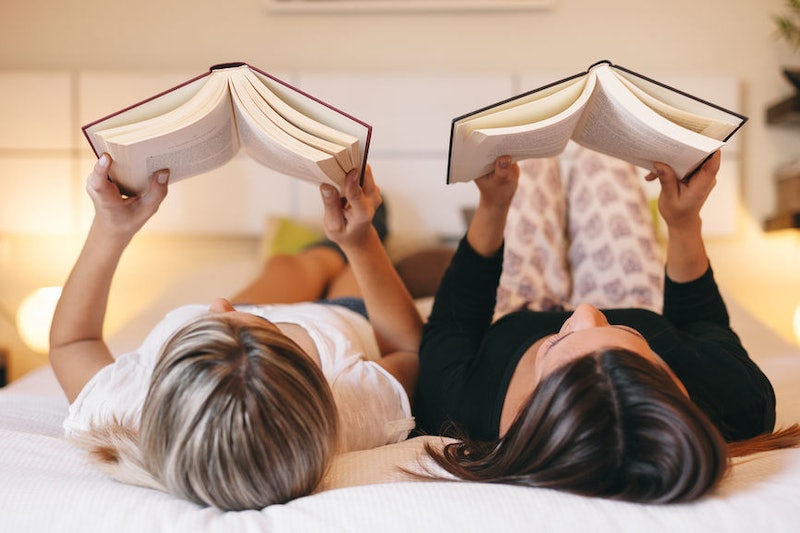 If you like speculative fiction, you're going to love this piece of news. Sci-fi and fantasy readers make better lovers, according to a new study published by researchers at the University of Oklahoma. Published in the journal Psychology of Aesthetics, Creativity, and the Arts as "What You Read and What You Believe: Genre Exposure and Beliefs about Relationships," the new research shows that sci-fi and fantasy readers "have more mature beliefs about romantic relationships than readers who gravitate toward suspense, romance, or even highbrow literature," according to Pacific Standard. If you're curious about how they were able to come to this conclusion, here's how the research went down.

The study analyzed the reading habits and relationship responses from 404 adult participants in English-speaking countries. The participants were first given a Genre Recognition Test (GRT) with 15 authors in each of seven literary genres — classics, contemporary literary fiction, fantasy, horror, romance, science fiction, and suspense/thriller — as well as 45 additional fake "author" names, which would weed out non-readers who wanted to appear smart by recognizing every name on the list. Research subjects also took tests to determine how much they relied on others in relationships, where they scored on the Big Five personality traits — agreeableness, conscientiousness, extroversion, neuroticism, and openness — and how they felt about a number of negative relationship beliefs, such as "When couples disagree, it seems like the relationship is falling apart" and "People who have a close relationship can sense each other’s needs as if they could read each other’s minds."

Their findings were somewhat surprising. Although researchers discovered that those who read "classics were less likely to believe that disagreement is destructive" in a relationship, sci-fi and fantasy readers went several steps further. Not only did fans of those genres not believe that disagreement would destroy a relationship, but they were also "less likely to support the belief that... partners cannot change, the belief that sexes are different, and the belief that mindreading is expected in relationships." Researchers also found that "prior exposure to the romance genre was positively correlated with the belief that the sexes are different," which is not to say that readers should avoid romance novels, but — as with all reader — they should be mindful that the stories don't reinforce toxic tropes about sexuality, masculinity, femininity, and love and relationships in general.

Because previous research has shown that supporting some of those negative beliefs about relationships can be "associated with maladaptive relationship attitudes, behaviors, and/or outcomes in the real world," it's not too much of a stretch to say that sci-fi and fantasy readers, who are accustomed to stretching their imagination in the books they read, might make better lovers than those who read other types of fiction. Obviously, not every SFF fan will be a perfect mate, but it couldn't hurt to check out that section of your local library the next time you pop in for a quick stroll through the stacks. It never hurts to try a new genre.