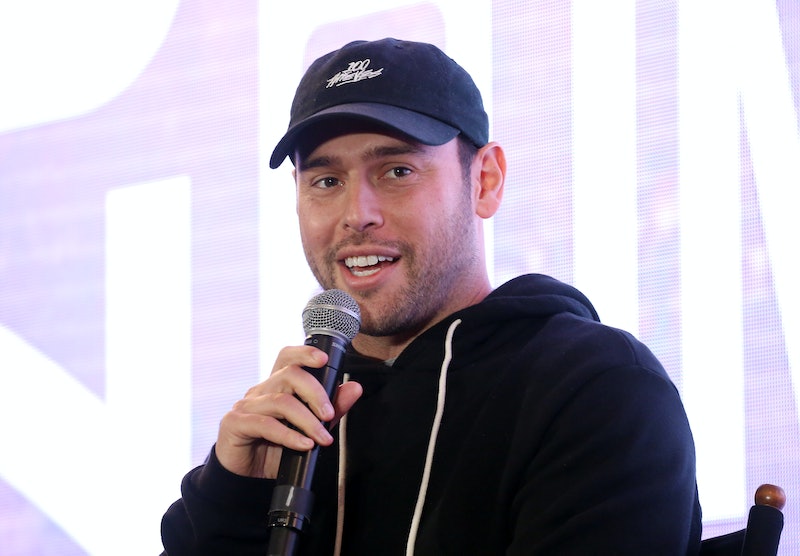 One week after Taylor Swift asked fans to help fight for her right to perform her old songs on live television, Scooter Braun wrote an open letter to Swift on Instagram. In a lengthy post, the music manager called out her fans for threatening him and his family on her behalf, and asked the singer to sit down and meet with him to discuss the issues surrounding the ownership of her masters. Braun — whose company, Ithaca Holdings, acquired Swift's former record label, Big Machine, in July — has previously avoided publicly commenting on the fight between himself and Scott Borchetta and Swift until Nov. 21, when he broke his silence at Q&A at the 2019 Entertainment Industry Conference, according to Variety.

"I haven’t talked about this in six months. Not once. I haven’t made a statement about it," he said, explaining that he wanted the chance to sit down with Swift and her team to talk everything through. "When there’s a lot of things being said and a lot of different opinions, yet the principals haven’t had a chance to speak to each other, there’s a lot of confusion." Later in the conversation, Braun added that in order to move forward, "people need to communicate," explaining that he has wanted the chance to work things out since the merger was first announced.

While Braun noted that he has been reluctant to publicly discuss the feud, he did say that he decided to speak up now because "things have gotten out of hand," implying that his team and the Big Machine Label Group have received threats over their disagreement with Swift. That said, he made it clear he wasn't interested in resolving the issue via social media. Hours later, however, Braun took to social media, claiming that "numerous death threats" made against him and his family have caused him to change his mind.

In his statement, Braun included a threatening message he claimed to have received, threatening the lives of his family. "I assume this was not your intention," Braun wrote, referencing Swift's request to fans that they let him and Borchetta know "how you feel" about her being barred from performing. "But it is important that you understand that your words carry a tremendous amount of weight," he continued.

In his post, Braun claimed that Swift and her team had "remained silent" after being informed of the ongoing threats against himself and the team at Big Machine, before adding that the singer had also apparently "rejected" all of his attempts to discuss the ownership of her masters. Bustle reached out to a representative for Swift about these claims, but did not receive an immediate response.

The manager also refuted Swift's claims that she was being prevented from performing her old songs at the American Music Awards, stating that she doesn't "need anyone's permission" to do so, but that he was "stating it here clearly and publicly to avoid any further confusion." (Swift and Big Machine Records reportedly reached a deal allowing her to perform her songs at the American Music Awards last week.)

In his statement, Braun conceded that "nobody should ever feel cornered or bullied" in the music industry — a seeming reference to her original Tumblr post claiming that she felt Braun bullied her in the past. But, he also implied that Swift was avoiding a meeting with him and the Big Machine Label Group because the situation was not "about the truth" but rather a "narrative" for the singer to exploit for her own benefit. "I am hopeful that this is not the case," he wrote, "but if you would prefer to make large public statements while refusing to work towards resolving things amicably then I just pray that nobody gets seriously hurt in the process."

At this point, it's unclear whether or not Braun and Swift will ever find a resolution to their disagreement, but it seems as if both sides will be able to agree with one part of Braun's Instagram statement: There truly is no conflict worthy of sending threats and abuse.

More like this
Taylor Swift Fans Caught A Possible ‘1989’ Clue In Her Latest Awards Show Speech
By Grace Wehniainen
Taylor Swift Explained The Ambiguous Ending To ‘All Too Well: The Short Film’
By Grace Wehniainen
Taylor Swift's “Carolina” Theme For 'Where The Crawdads Sing' Soundtrack Is Here
By Jake Viswanath
Here’s How Lizzo Is Supporting Abortion Rights After The Roe v. Wade Reversal
By Brad Witter
Get Even More From Bustle — Sign Up For The Newsletter