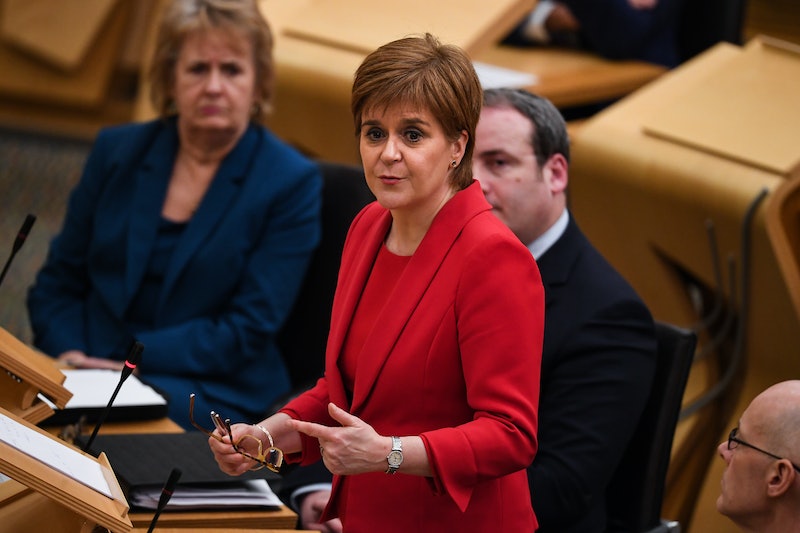 One of the United States' most-talked about new members of Congress is now attracting international attention. On Tuesday, Scotland's First Minister defended Alexandria Ocasio-Cortez on Twitter, offering the congresswoman support in the face of those who feel "threatened" by her actions.

First Minister Nicola Sturgeon is the head of the Scottish government and the leader of the Scottish National Party (SNP). She is the first woman to serve in both positions. On Tuesday, Sturgeon shared an article from The Hill on Twitter that suggested that at least one congressional Democrat is trying to find a primary challenger for Ocasio-Cortez as a means of ousting her from Congress in 2020.

Sturgeon condemned the notion that members of Ocasio-Cortez's own party could plan to push her out before she's served longer. She also offered words of praise for the congresswoman from New York. As the Scottish leader wrote:

It’s amazing how threatened some people are by clever young women - @AOC has only just been elected and this article suggests that some in her party are already planning to oust her, just because she’s rocking the boat. More power to her.

Ocasio-Cortez certainly took note of the First Minister's words, as the congresswoman retweeted Sturgeon's post. Ocasio-Cortez also offered her own thoughts on The Hill's article in another tweet.

In her tweet, Ocasio-Cortez condemned the idea that certain individuals are entitled to attaining elected office, a notion suggested by a source in the aforementioned article from The Hill. The congresswoman lambasted this concept, writing:

'You've got councilpeople who've been waiting 20 yrs for that [Ocasio-Cortez's] seat.' That broken mentality, that public office is something you wait in line for, instead of earning through hard organizing, is exactly what voters want to change. Shows you how disconnected some folks here are.

While The Hill's article reported via an anonymous source that some Democrats may be trying to oust Ocasio-Cortez from Congress, the Democratic members the outlet interviewed for the piece suggested this is not the case. Hakeem Jeffries, a top House Democrat, told the paper that so far no one in Congress has approached him about having someone run against Ocasio-Cortez. As Jeffries described to the outlet:

Notably, Ocasio-Cortez's campaign spokesperson, Corbin Trent, also told the paper that her campaign isn't opposed to the idea of primaries, as they allow voters to have agency. He also asserted that the congresswoman is going to do her best to ensure that she's meeting her constituents' needs. As Trent told The Hill:

We believe in primaries as an idea. We’re not upset by the idea of being primaried. We are not going to go out there being anti-primary — they are good for party ... If voters in the district feel that they can be better represented, that will be their choice on primary day ... In the meantime, we’re going to be doing our dead-level best to make sure we are representing the needs and the will of our constituents.

Overall, Congresswoman Ocasio-Cortez is certainly making waves, both in the United States and globally. The Scottish First Minister's tweet demonstrates that others around the world are definitely watching as the progressive congresswoman kicks off her first term in office.