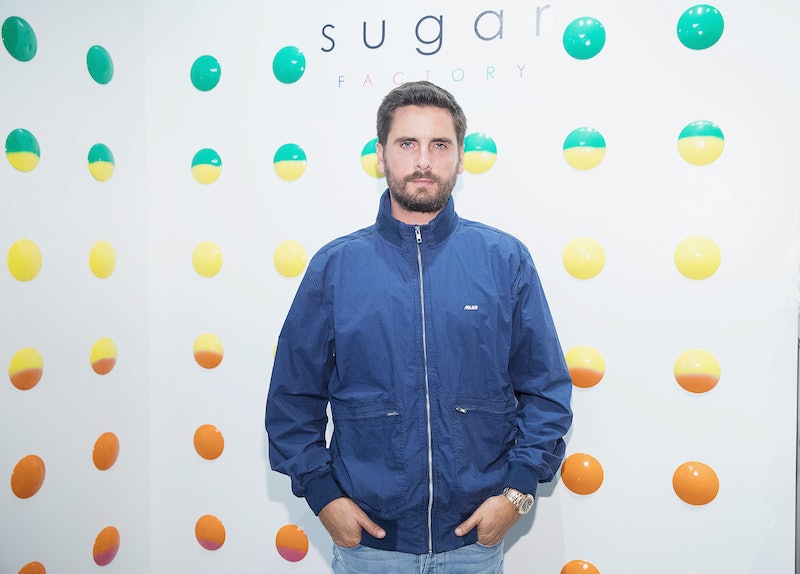 This summer, Keeping Up With The Kardashian fans will have a new way to keep up with Lord Disick. According to People, Scott Disick is getting his own reality show, and it's way more than another KUWTK spinoff. His new show, Flip It Like Disick, will have the reality star flipping houses for the rich and possibly famous.

The eight episode E! series will reportedly feature Disick flipping high-end homes, which has become a passion project of his. It's one that seems to run in his family, since his late dad Jeffrey Disick was a well-known real estate developer. Five years ago, Disick flipped his first house and he's been working on remodeling homes for his famous friends and family ever since, including his ex Kourtney Kardashian. He recently helped build a playhouse for their sons, nine-year-old Mason and four-year-old Reign, and their six-year-old daughter Penelope.

As of now, there's no word if Kardashian or any of her sisters will appear on the show, but, it does have one KUTWK connection: Kris Jenner. She's a co-executive producer on the one-hour series. And it's fair to say, Disick, you're doing amazing, sweetie, or Jenner wouldn't attach her name to this project, which has reportedly been in the works since 2017.

“I’m excited to bring fans a new series that shows what I’m really passionate about professionally, which is flipping real estate and doing crazy and impressive renovations on celebrity homes,” Disick said in a statement via People. “E! has never had a show like this before. It’s a bit different than viewers are used to seeing, but I think they will be both entertained and inspired by my team.”

Disick isn't flipping these houses on his own, though. People reported that Disick's remodeling team includes Willa Ford, the '90s pop star-turned-interior designer, along with his best friend and business partner Benny Luciano, and Disick’s long-time assistant Lindsay Diamond. Also, look out for Flip It Like Disick's contractor, Miki Moor, who People described as the "all-star short-tempered contractor," which feels like code for the one who's going to bring the drama.

As for Lord Disick, he's bringing the charm, according to Amy Introcaso-Davis, E! Executive Vice President of Development and Production. "Scott Disick is funny, unpredictable and unfiltered," she said in a statement to E!. "Fans of Scott on Keeping Up with the Kardashians will get to see another side of him in Flip It Like Disick, as an entrepreneur and design guru, leading his talented and opinionated team through difficult design challenges that result in astonishing reveals." So, think Property Brothers, but with just one bro that's helping make all your high-end real estate fantasies come true.

As of now, this new TV venture doesn't mean Disick will stop showing up on Keeping Up With The Kardashians. This season of KUWTK, Disick's shown just how much he's grown up. So much so, that after the latest episode a fan tweeted, "Scott should win the award for most changed since the beginning of the show, he has always been my fav." With his upcoming series, Disick is prepared to show you another side of himself, along with all sides of the house he's flipping.