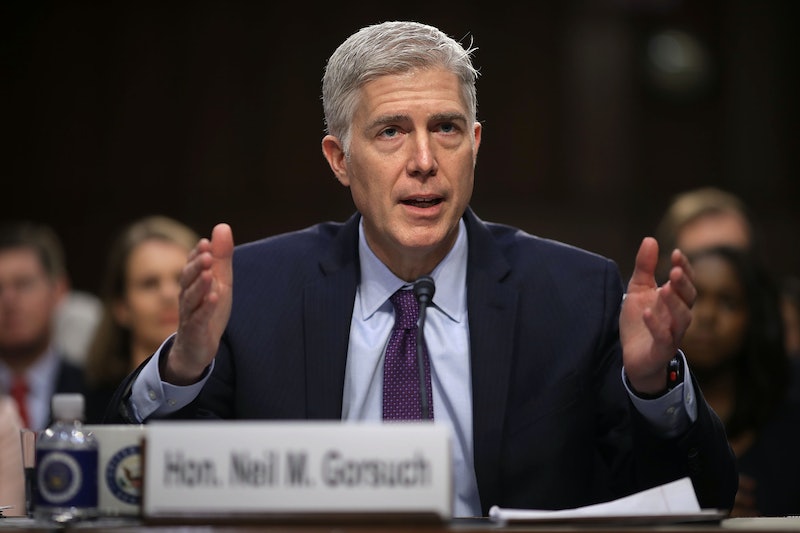 During the second day of his confirmation hearing, Donald Trump's Supreme Court nominee Neil Gorsuch described Oxford "like something out of Harry Potter," and the Internet has a lot of questions.

According to a number of #GorsuchHearing tweets, the SCOTUS nominee referenced Hogwarts in describing his dissertation adviser's office. In 2004, Gorsuch received a Doctor of Philosophy in Law from Oxford, where he studied under Natural Law and Natural Rights author John Finnis, an anti-LGBTQ scholar.

(No one tell Gorsuch about Dumbledore, mmkay?)

In all seriousness, one has to wonder just how, exactly, Finnis' office reminded Gorsuch of Harry Potter. Is Oxford hiding an aging phoenix or some talking portraits of past chancellors? Did Finnis make Gorsuch write lines with a special pen that scratched them into his skin? The Senate Judiciary Committee won't probe Gorsuch further on the matter, but someone's going to have to find out exactly why the nominee invoked J.K. Rowling's bestselling series in his confirmation hearing.

Gorsuch's Harry Potter comments have provided a lighthearted diversion from the uncertainty surrounding his appointment. The SCOTUS nominee hasn't exactly given straight answers to questions about his legal opinions on a variety of issues, saying that to do so would show legal bias. Although this is a common practice among Supreme Court nominees in confirmation, it does not provide the Senate Judiciary Committee or the public with the kind of transparency they need from potential justices.

Neil Gorsuch's confirmation hearing is expected to continue on Wednesday.

More like this
I've Read The Harry Potter Books 30+ Times & This Plot Hole Haunts Me
By Kelsey Stiegman
'The Sandman’s Ending Is A Departure From Neil Gaiman’s Comic Book Series
By Kadin Burnett
Does 'Locke & Key’s Ending Mean There Could Be A Season 4?
By Sophia Moore
'The Simpsons' Will *Finally* Address How They “Predict The Future”
By Sam Ramsden
Get Even More From Bustle — Sign Up For The Newsletter