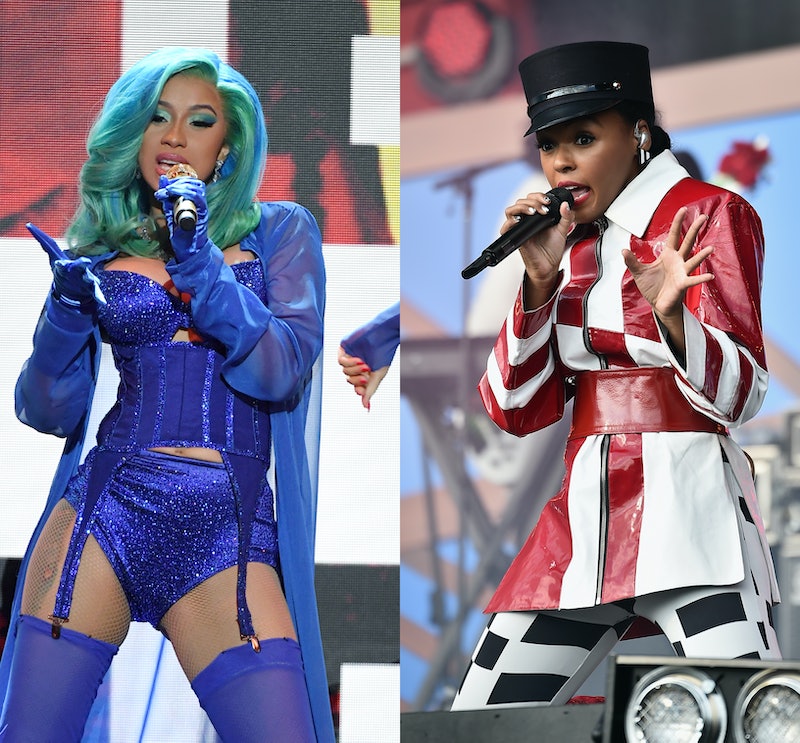 The list of people who will be in attendance at the 2019 Grammys is loaded with artists who will go down in history for their unique and accomplished talents. Furthermore, this year's nominees are dominated by women — 15 are in the running for the top four awards — which is a sign of improvement from last year's roster. Now, the ceremony is hours away, and Grammy nominees Dua Lipa, Cardi B, Janelle Monàe, and more are preparing to blow the country away during music's biggest night.

Monàe is getting ready by hyping up her sisters in music, whom she's so proud to stand alongside on such an iconic night. "There's still more work to do, but this is to be celebrated," she said at "Fem the Future," a pre-Grammy's brunch, as reported by Boston Herald. "Most times, it feels like it's just a competition. Now I think it's important to come together. We are starting something that could be incredible for all of us, as well as other young women coming into this industry."

She continued, "We all want the same thing: for women to be treated with respect, to be treated with dignity, and presented with equal opportunity in all facets of our lives. And while we can acknowledge and celebrate the progress that’s been made in the last year, we still have a long, long way to go."

Meanwhile, Carlile is taking the big day in stride. Whether or not she takes home an actual Grammy, she already has a chocolate Grammy that she's pretty excited about. She shared a photo on Instagram captioned, "Me and the twins with our chocolate Grammy from @clivejdavis No matter what happens today our bond could never be broken @phil_hanseroth @timhanseroth."

Cardi B is also getting in the right mindset for her big night and big performance after receiving a heartfelt message from a good friend. "I know you got a lot going on but it's Grammy's weekend!" her friend model Achonti Shanise wrote. "You inspire the world and even me! So win or lose it doesn't matter." Cardi, who is nominated for Record and Album of the Year, among others, was obviously touched by the message. "Real friends are people that send you these type of messages even if ya haven’t seen each other for months !" she wrote. "I love you sooo much @achontishanise! I been so nervous! my mind been all over the place good to have friends that encourage me always."

Best New Artist nominee Dua Lipa started the morning off with flowers and champagne after a night of pre-Grammy's celebration. And her fellow category nominee, Bebe Rexha, documented her morning on her Instagram stories. She woke up celebrating with her parents and ate a breakfast including a poppy seed bagel with scallion cream cheese, eggs, and tomatoes. "Yeah, about trying to eat healthy right before the carpet... um, not gonna work," she said.

Unfortunately, not everyone can leave the Grammy's holding a shiny gold gramophone, but they can leave knowing they've made an impact on their peers, and the world, with their music — and that in and of itself is a reward that will never lose its gravity, as this nominees seem to be well aware of.