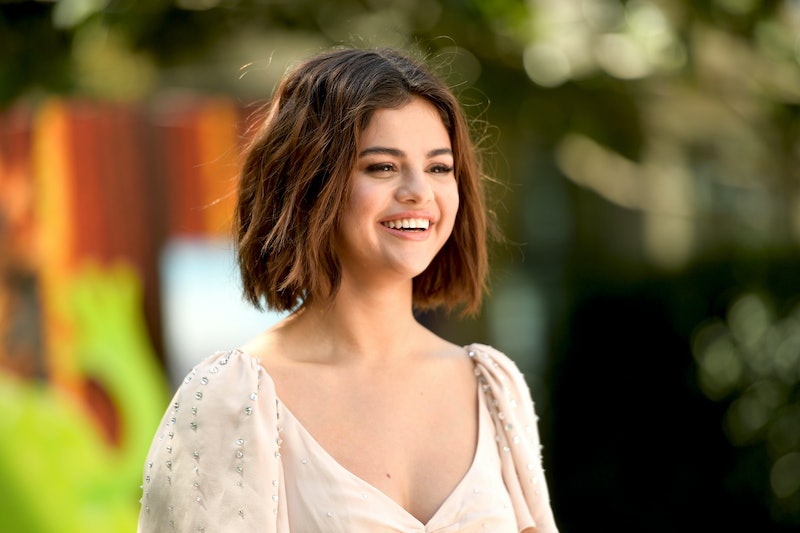 After laying relatively low for the past few months, Selena Gomez celebrated her best friend's bridal shower over the long weekend, People reported. The singer was surrounded by members of her close-knit crew for the occasion, and seemed super happy to be hanging out with loved ones.

Gomez and her girls got all dolled up in honor of their friend Courtney Barry's upcoming nuptials. Barry posted a few photos from the party on Jan. 20, and it appears as if they all had a blast. "a few of my perfect girls threw me a perfect shower," she captioned a collage of Polaroid photos on Instagram.

In one of the pics, Gomez can be seen embracing Barry and two more of their friends. She looked lovely in an elegant red dress, and was grinning from ear-to-ear. Despite having gone through some rough times at the end of last year, it seems like she's doing so much better now.

Back in the fall of 2018, Gomez was reportedly hospitalized twice due to a low white blood cell count, according to TMZ. During the second visit, a source claimed to the outlet that the singer had "a meltdown" and "freaked out," which reportedly led to her spending some time at a psychiatric facility.

"She has had a tough few weeks and the panic attack in the hospital was the tipping point," a source claimed to People at the time. "She realized she needed to seek additional help for her ongoing emotional issues. She’s surrounded by close family and has a lot of support. She’s doing better now and is seeking treatment on the east coast."

Since then, she's mostly been staying out of the public eye, but Gomez posted an optimistic update to her Instagram account in mid-January. "Last year was definitely a year of self-reflection, challenges and growth," part of Gomez's caption read.

"It’s always those challenges which show you who you are and what you are capable of overcoming. Trust me, it’s not easy, but I am proud of the person I am becoming and look forward to the year ahead."

Gomez has been spotted spending a lot of time with her closest gal pals as of late, and it seems like it's definitely having a positive effect. In December, the singer went snow tubing with a bunch of friends, and looked like she was having a blast in a photo alongside actor Bailee Madison and model Connar Franklin.

On Jan. 10, she reunited with her ride-or-die bestie, Taylor Swift, for a wine night alongside Cazzie David. "20wineteen," Swift captioned the pic, which shows both Swift and Gomez mid-laugh. Wine nights with your ladies are pretty much the best, aren't they?

Gomez is super lucky to have such a supportive inner circle, including Barry, the bride-to-be. The pair got matching tattoos together last year, and made it clear how much Barry's friendship means to her. "The way you handle life’s most confusing moments is indescribable and graceful," Gomez captioned a photo of the duo showing off their new ink. "You are the definition of FEARFULLY and WONDERFULLY made baby!"

It's great to see Gomez looking so happy and healthy. And hopefully she's actually feeling that way on the inside, too.