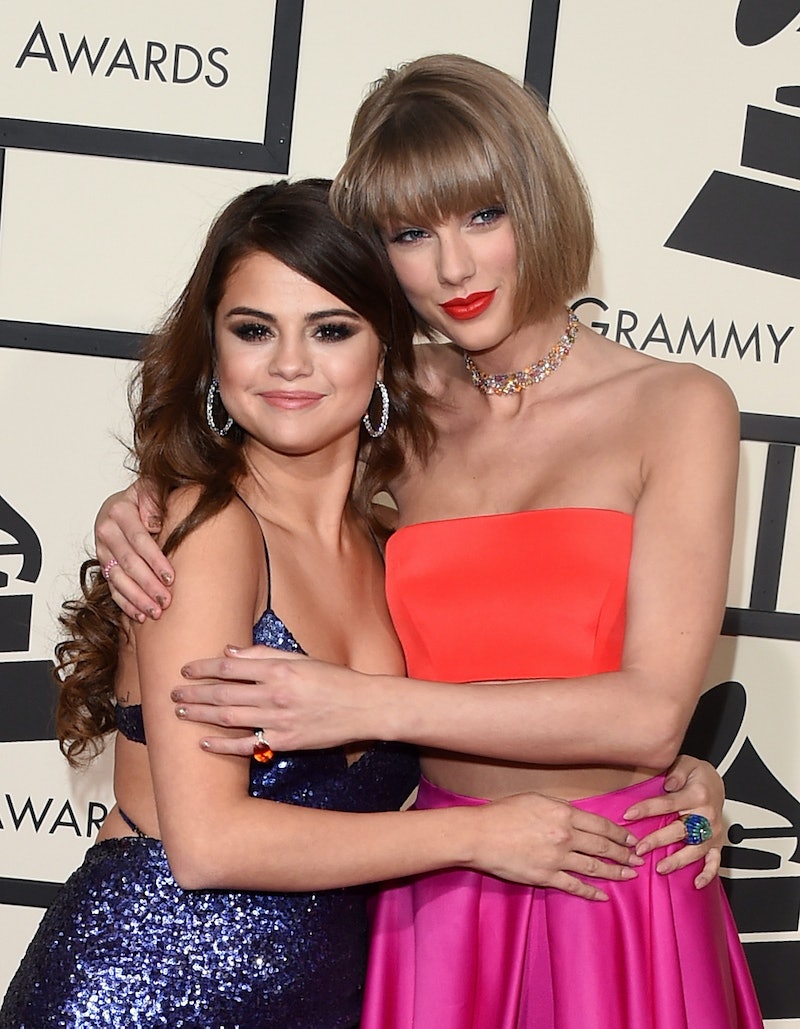 Now this looks like a true happy hour. Taylor Swift's photo with Selena Gomez and Cazzie David shows the smiling crew kicking off the new year with the same old love — and perhaps a libation or two. "20wineteen," Swift cheekily captioned the selfie in which she appears red-lipped and holding a half-empty (or is it half full?) glass of white wine. The Grammy winner is also sharing a laugh with Gomez and Larry David's daughter, who famously dated Pete Davidson prior to his surprise 2018 engagement to Ariana Grande, in the snap.

While it's unclear exactly how Cazzie knows the other two women, Swift and Gomez go way back, of course. Just last month, Gomez — who'd been out of the spotlight after reportedly checking in to a mental health facility in October — paid tribute to her Grammy-winning pal during her first re-emergence in public (a snow-tubing outing with friends) by wearing a black Reputation stadium tour sweatshirt. (Gomez's former Wizards of Waverly Place costar Bailee Madison shared a photo of her and the singer posing with their pal, model Connar Franklin, amid a snowy backdrop.)

After all, Swift had invited Gomez to join her at a May Reputation tour stop in Pasadena, California where the pair sang a duet version of Gomez's 2015 single, "Hands to Myself."

"Are you guys having a good night? I have to say thank you to my best friend of about 12 years, almost 13, and the reason why she has been one of my best friends is because this person has never ever judged a single decision I’ve made. She’s always met me where I’ve been. She’s encouraged me when I’ve had nothing to be encouraged about, and I don’t know if I would be as strong as I am if I didn’t have you and your family because you’ve changed my life. And—she’s going to kill me after—but honestly, thank you for the bottom of my heart for supporting someone who I know is the most beautiful, strong, independent woman I’ve ever met. So thank you as a best friend."

Following their joint performance, Swift returned the love, posting a professional concert photo with Gomez on Instagram. "To the person I could call at any time of day, who has been there no matter what... you absolutely KILLED IT tonight and everyone was so excited to see you," she captioned the pic. "I love you, and 60,000 people at the Rose Bowl loved you too."

The two singers first struck up a sisterhood a la Priyanka Chopra and Sophie Turner when Swift was dating Joe Jonas and Gomez was Nick Jonas' rumored girlfriend. “She was the girl with the big curly hair and the bracelets and the cowboy boots, and I was definitely up-and-coming. We just clicked,” Gomez reminisced to KISS FM UK in December 2017. “It was the best thing we got out of those relationships.”

It seems the last time Gomez publicly spoke about Swift, however, was back in September during an Instagram Live fan question-and-answer session. As seen in social media videos posted by Billboard, after one fan posed the question, "How's Taylor?" Gomez began another love fest:

"Taylor's awesome. I love her. She's amazing. I just talked to her today. She's literally like my big sister. I tell her everything. She's so smart it freaks me out."

Fans will be thrilled to see their friendship (and possibly a new one with Cazzie) is going strong, whether at wine:30 or any other time of the day.

More like this
Hailey Bieber Just Responded To *That* Viral Met Gala Moment
By Radhika Menon and Sam Ramsden
Everything To Know About Taylor Swift’s 10th Studio Album, 'Midnights'
By Grace Wehniainen and Jake Viswanath
There's A Taylor Swift Easter Egg In Ryan Reynolds' 'Deadpool 3' Teaser
By Marina Watts
Confusion Reigns After Kanye Changes His Instagram Profile Pic To Kris Jenner
By Jake Viswanath
Get Even More From Bustle — Sign Up For The Newsletter