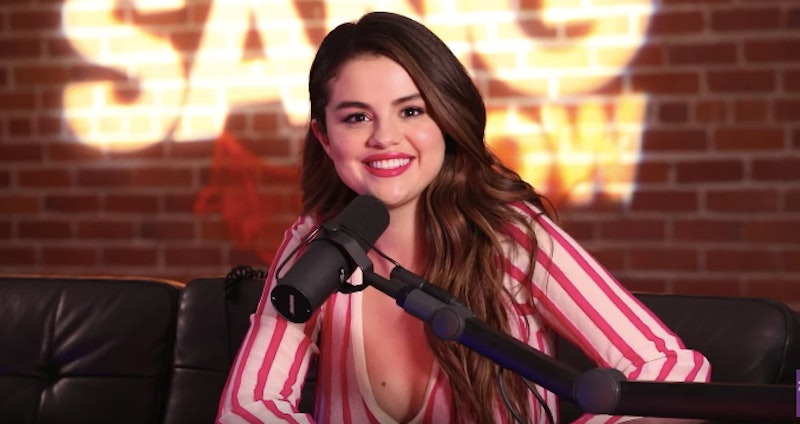 Everyone can probably agree that it sucks to be fly solo sometimes, but Selena Gomez is loving single life. She's been on her own since her breakup with Justin Bieber two years ago. It was difficult at first, she said on the Zach Sang Show, but for now, she's glad to be free from the complicated and messy challenges that often come with dating.

In the interview, she called herself "super, super single," a status that is reflected in her two latest releases, “Lose You to Love Me” and “Look at Her Now." Fans believe the latter to be about her falling out with Bieber, who's now married to Hailey Bieber.

She's remaining patient in finding love again because for her, it didn't go so well the first time. "You're in a phase of life where you experience love for the first time and I think that can just be just a little toxic," she said. "You have this codependency that you think is love and then you have this addiction to the passion and the frustration with each other that you think, 'Oh, that's love,' or fighting or doing all this stuff, 'Oh that's love,' and I believed that for a long time." Now she's able to recognize those elements as what she doesn't want in the future.

She said she would approach things so much differently now, especially when it comes to expressing her feelings. Gomez discussed how it's important to be transparent in relationships, and then added that girls are often judged harshly for sharing their emotions. That's something the singer doesn't have time for anymore. "I love being a girl and I love having the emotions I have, falling super deep and being passionate, she said. "It’s just about containing it and channeling it in the right areas."

That's what she's doing with the vulnerability in her new music. She talked about it On Air with Ryan Seacrest, saying that she wrote "Lose You To Love Me" a year ago and feels completely different now than she did then. She's received some negative feedback for being so open in the song, but is still committed to sticking with it because it's important to her.

"That’s the unfortunate part of what I do. It’s all very real to me, and I’m sure it’s just entertainment for other people," she told Seacrest. "I had become numb to it, and it would be stupid of me if I didn’t acknowledge what I had felt, 'cause it would be inauthentic. I know there are thousands of people, men and women, who have felt this feeling."

When it comes to finding the kind of love she wants for herself, she knows it will be worth the wait. "I’m happy waiting for that for however long it takes because we're going to be doing this forever," she said.

More like this
4 Surprising Celeb Throuples That Got The Internet Talking
By Sophie McEvoy
Michael B. Jordan Tackled His "Public Breakup" With Lori Harvey On 'SNL'
By Brad Witter
Who Is Pete Davidson Dating? He & Chase Sui Wonders Got Caught Kissing
By Jake Viswanath
RHOP’s Robyn Dixon Explained Why Juan Paid For Another Woman's Hotel Room
By Brad Witter
Get Even More From Bustle — Sign Up For The Newsletter
From hair trends to relationship advice, our daily newsletter has everything you need to sound like a person who’s on TikTok, even if you aren’t.