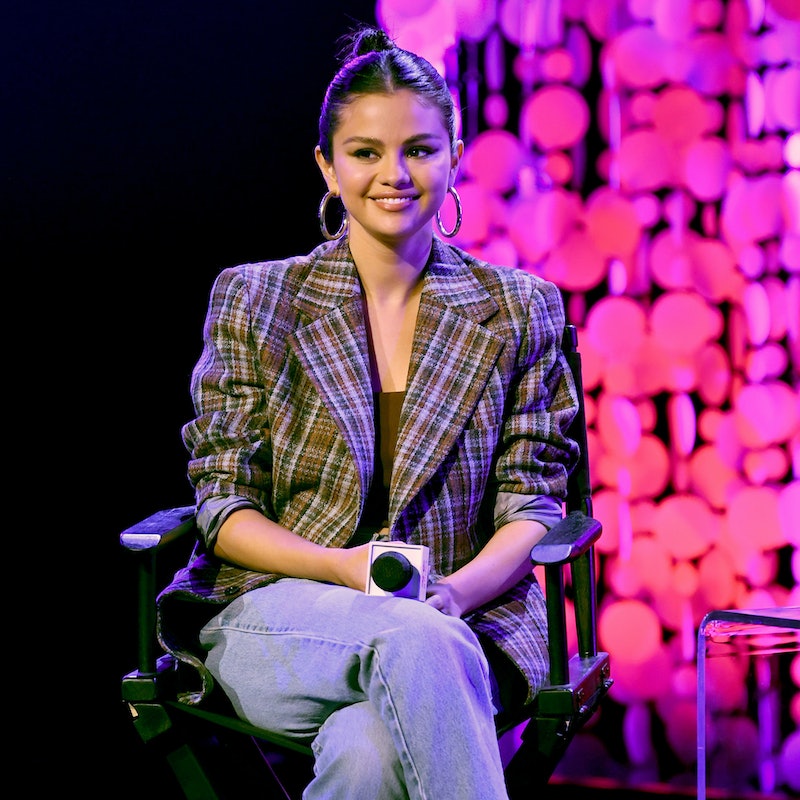 Selena Gomez has released an empowering new album, dropped a glittery new music video and even unveiled some brand new ink, all within a few days. Shortly after releasing the music video for her new single, "Rare," Selena Gomez revealed the tattoo she got after her kidney transplant on Instagram, which is also briefly visible in the very beginning of her new clip.

"My rare video is out! So I’m posting a few pics from that day," Gomez wrote alongside a series of behind-the-scenes photos from the video shoot. In the first picture, which features the singer in a rhinestone-studded dress with her arms over her head, Gomez's new tattoo can be spotted on her right arm, with the number "6" clearly visible. (In a 2018 interview with JustJared, Francia Raisa, who donated her kidney to Gomez, confirmed that the surgery took place in June 2017.) However, it's impossible for fans to see the full date of the surgery, in both the photos and in the brief glimpses of the tattoo that are visible near the start of the "Rare" music video.

After revealing in 2015 that she had been diagnosed with Lupus, Gomez announced in September 2017 that she had undergone a kidney transplant due to complications from the illness a few months earlier. "I’m very aware some of my fans had noticed I was laying low for part of the summer and questioning why I wasn’t promoting my new music, which I was extremely proud of," Gomez wrote on Instagram at the time. "So I found out I needed to get a kidney transplant due to my Lupus and was recovering. It was what I needed to do for my overall health."

Later in that same post, Gomez revealed that Raisa — who she had known for a decade at the time of the surgery — had volunteered to donate her kidney to the singer in order to save her life. "There aren’t words to describe how I can possibly thank my beautiful friend Francia Raisa," Gomez wrote next to a photo of herself and the actor holding hands in the hospital. "She gave me the ultimate gift and sacrifice by donating her kidney to me. I am incredibly blessed. I love you so much sis."

In the years since, Gomez has been incredibly effusive with her gratitude for Raisa and her decision to become an organ donor, even taking time to honor the actor at the 2017 Billboard Women in Music Awards. "To be honest, I think Francia should be getting this award because she saved my life," a tearful Gomez said while accepting the Woman of the Year Award. "Specifically this year, I would like to thank my amazing team and my family because they stuck with me through some really hard times," the singer continued, before noting that "I don't know how I'll ever repay it."

While Raisa has been open about the difficulties that came with donating her kidney — and the toll that the surgery took on her health — the actor told JustJared in 2018 that the whole ordeal only brought her and Gomez closer together. "She felt bad about even having me do that because we are just friends, I am not her family or anything. Well, I am now! She has my blood," Raisa said, adding that their respective families have bonded together as well. "Her grandparents are my grandparents now and so I have this extension of a family and it’s been really amazing."

The surgery made Raisa and Gomez so close that the singer even told Capital FM in December that they had gotten matching tattoos to remember it. "I actually got the date of when I got my kidney transplant," Gomez revealed. "And I did that with the girl that gave me her kidney."

Two and half years after Gomez's life-saving surgery and Raisa's decision to donate her kidney to her friend, the pair have clearly decided to make their strong bond permanent, so that they will always be able to honor the sacrifices they've made for one another.

More like this
Selena Gomez Confirms She's Single Amid Drew Taggart Dating Rumors
By Martha Sorren, Jake Viswanath and Jack Irvin
The 12 Most Controversial & Unexpected Grammy Moments Ever
By Jake Viswanath
Linda Ronstadt’s “Long Long Time” Plays A Pivotal Role In The Last Of Us
By Brad Witter
Hilary Duff's Husband Matthew Koma Has Her Name Tattooed On His Butt
By Jake Viswanath and Stephanie Downs
Get Even More From Bustle — Sign Up For The Newsletter
From hair trends to relationship advice, our daily newsletter has everything you need to sound like a person who’s on TikTok, even if you aren’t.