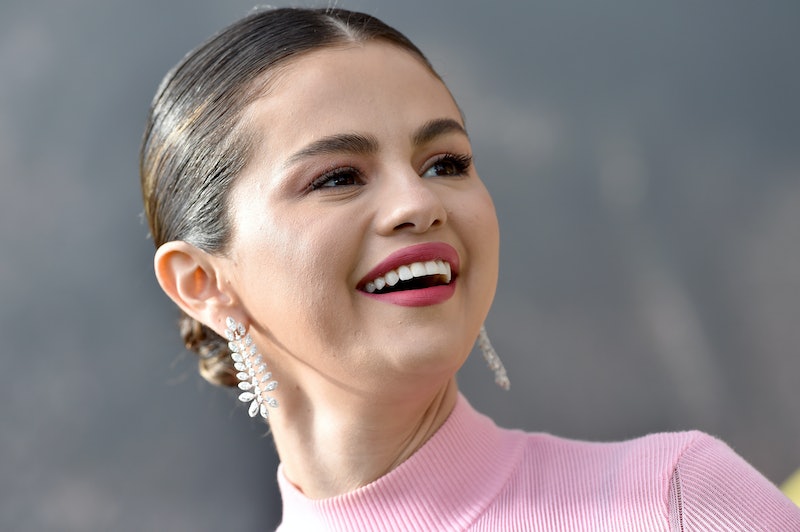 Selena Gomez is having a massive start to 2020. Her first film of the year, Dolittle, has premiered, and she also just dropped her new album. Because she has a lot to be proud of, she's celebrating her accomplishments. Selena Gomez's neck tattoo is in honor of her Rare album, and it's so cute and dainty.

In an Instagram post, Gomez revealed her new ink done by celebrity tattoo artist Bang Bang. The piece sits just below the "Look At Her Now" singer's ear, and features delicate script that spells out her album title Rare. In her caption, Gomez wrote, "Did it again @bangbangnyc rare," with a butterfly emoji — a motif common in her new single and album's artwork.

While the new tattoo may be her first of 2020, it isn't the only recent piece of artwork that she's added to her relatively extensive collection. Back in Nov. 2019, Gomez debuted a massive new thigh tattoo that was also done by Bang Bang. The piece featured closed praying hands with a rosary draped around the wrists that extended down the singer's thigh. The tattoo was one of her biggest pieces to date, and like her new "Rare" tattoo, she debuted it just in time for a big milestone: her performance at the 2019 AMAs.

Prior to her AMAs tattoo, Gomez got tandem ink with her friend and singer-songwriter Julia Michaels. The pair were backstage at Michaels' show in early November when they decided to get arrow tattoos together. Both women got the simple piece but in alternating directions so their ink pointed toward one another when they held hands.

Gomez may be busy getting tattoos, but she's not the only one. Other celebrities have been recently adding art to their bodies, just like Gomez.

Singer Miley Cyrus has been steadily adding to her large collection of tattoos. In December, she added a simple script piece that read "Freedom" to the top of her hand. The ink came mid-divorce from actor Liam Hemsworth and had the internet speculating on whether the piece by Winter Stone was related to the split.

During the same time as the "Freedom" tattoo, Cyrus added another. The second bit of body art was a quote from a letter Yoko Ono wrote to Cyrus that reads, "I am proud of U, Yoko."

While Gomez may not be getting as many tattoos as Cyrus (aka two in a single day), it seems both women use them to mark special occasions in their lives. For Gomez, this new ink seems to be all about her latest musical achievement.