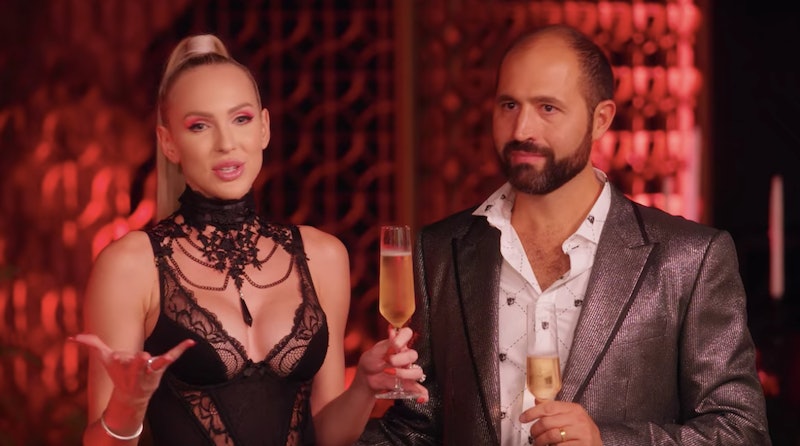 Netflix/screenshot
By Amanda Whiting
May 26, 2020

In the newly released second season of Netflix's Selling Sunset, rumors about how Christine Quinn met her then-fiance Christian Richard swirl early on. “It’s insulting to him as a man, and it’s insulting to us as a couple,” Christine says when Heather shares that Mary — or maybe it was Chrishell? Details are unimportant here — suggested she was “the other woman” when she began seeing Christian. By the end of the season, the accusation that there was "overlap" in their relationship rises to the heights of unforgivable slander, dominating conversation at Mary’s burlesque bachelorette party and then again at her Hollywood Hills backyard wedding. Now, Christine is setting the record straight.

When Christine met Christian, a retired tech millionaire, she was the one dating someone else, which Mary knew because the two were introduced. “I went on three dates with some guy who I went bowling with that she met,” Christine tells Bustle. “The overlap comment was actually about me, believe it or not.”

In reality, Christine met Christian through a mutual friend about a month after cameras stopped rolling on Season 1. This friend had, intriguingly, also gone on a date with Christian, but they didn’t hit it off, so she passed him off to Christine. “And then she's like, ‘Also, he's looking for a house.' And I was like: double bonus,” says Christine, who ended up with a new husband, a commission on his LA mansion, and a closet to hold all 50 pairs of her Louis Vuitton slippers. “Him and I had an amazing steak dinner and got to know each other, and we just hit it off right away. He's everything that I ever wanted.”

For fans of the show who know Christine as someone who never misses a nail appointment, what Christine wanted in a man may have come as a surprise. “I want to be with a nerd. I don't want a hot guy,” she says before counting off all the ways she and Christian differ. For one, he hates the spotlight. “He's the opposite of me in every way, because I love to put myself out there. I love to be fabulous. He doesn't care about dressing up or looking good. He doesn't care about any of that stuff. He only cares about his work and traveling,” she says. “Which I care about as well.”

Still, being on Selling Sunset was a sacrifice Christian was willing to make "out of love," Christine says. In the third season, premiering this August, he even agreed to film their gothic December wedding. (The bride wore black.) Already Christine is thinking about what comes next for the couple. She sees herself having two kids "within the next year or two" and had big travel plans for the next six months, but then lockdown happened. Instead, she’s bought a bread maker, a pasta maker, and a “whole wardrobe” of matching sweatsuits. “My quarantine is like Martha Stewart pre-jail, like 2004.”

As for all the drama that got kicked up in Season 2, Christine says Mary didn't act like she would expect for a friend, whether or not she was genuinely confused about who was "overlapping." “It'd be one thing if she reached out and was like, 'Hey, we're about to film. I just want to clarify how you met Christian.' She could have done that. She didn't do that. Instead she just spread lies.”

But rather than wait around for an apology or even her chance at revenge, Christine is focusing on her “other really great friends [who] treat me really well.” Things with Mary are cordial enough. “She doesn't like any of my Instagram posts. She never comments," Christine observes. “As Chrishell would say, I think we're coexisting just fine.”