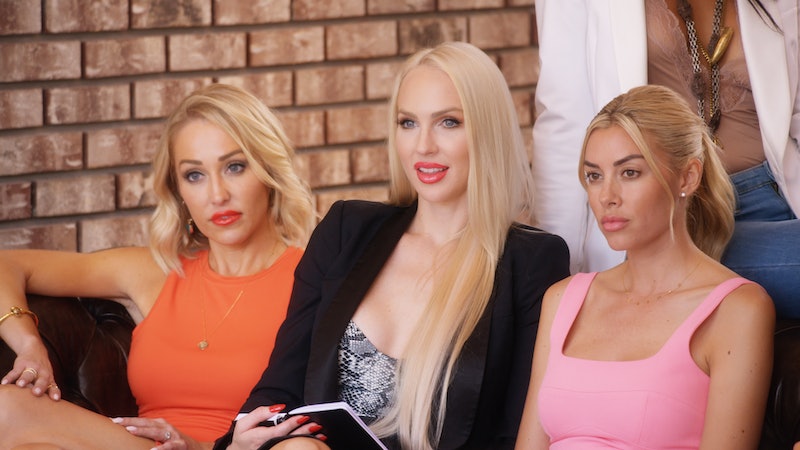 Selling Sunset's sophomore outing includes bigger homes, bigger drama, and a cliffhanger "still to come" ending that sets up Selling Sunset Season 3 for even more drama and heartbreak. Fortunately, it won't be a long wait: The Wrap reported on Friday that the show has already been renewed, and will return on Aug. 7.

As for what to expect, the teaser showed several storylines that will unfold. For starters, The Oppenheim Group finally sells their coveted $40 million mega-mansion, though it's left a mystery which agent gets the $1 million commission. Davina and Christine, the closest to villains that Selling Sunset has, double-team a house listing, suggesting that the two only grow closer as the rift between Christine and Mary widens. Later, Mary confronts Christine directly, warning that she's to close to permanently destroying their friendship. "You can't call me whatever you want and expect to be friends," she snaps.

Selling Sunset also teases a fracture in The Oppenheim Group. Maya and Christine are vocally unhappy that Brett and Jason are favoring Mary yet again, leading to a dinner between Heather, Maya, and Christine in which they seem to weigh whether or not they might want to leave the brokerage firm and get away from "egotistical men."

Elsewhere, several romances seem to hit major roadblocks. Romain hints to Mary that he's done something terribly wrong, and the firm finds out about Chrishell's sudden divorce from her husband Justin Hartley. Season 3 will also apparently show Christine and Christian's gothic winter wedding, but it looks like drama unfolds the day of, causing Chrishell to (yet again) storm off.

In the meantime, Brett and Jason's brokerage firm still seems to be doing business as usual. There are five pages of listings on the company website, and Jason recently sold a $4.1 million home to late night talk show host Lilly Singh. Apparently Prince Harry and Meghan Markle are currently on the market for an LA home, though Jason noted to Inman.com that the Oppenheim Group isn't their brokerage firm. (That would've made for some fantastic TV.)

For the most part, the agents seem to be staying indoors during quarantine, though. In an interview with Ozark FOX AM's Jeremy Rabe, Christine said she's bought new pasta and bread makers and has simply been "enjoying the time off." She hopes that with all the downtime, people will come to understand that "what you're seeing [on Selling Sunset] is not really who I am."

Maya also spoke to Rabe, saying that everyone in her family is well and healthy. She's currently sheltering in Miami with her husband, and mentioned that she's about to have baby number two "any day" now.

Mary and Romain, too, are sheltering together after their wedding. Mary explained to People that they were meant to leave for their Bali honeymoon in March, but that's obviously been put on hold. She added that she's currently enjoying domesticity with Romain, but that they're "going to start looking for a house to start flipping."

Chrishell, meanwhile, has become closer with her mom during the pandemic. "My mom is suffering from stage 4 lung cancer and because of COVID I haven’t been able to see her,” she told Us Weekly. “However, now we talk on the phone every day, which we never did before."

Heather is also spending time at home with her new beau, Tarek El Moussa. "Since we can’t go out on dinner dates, we’ve been improvising & having quality time & date nights on the boat," she wrote in a May Instagram post. Davina is also at home, and on May 19 posted a photo of herself in a fancy red dress. "Throwback to a time before I was wearing sweatpants and a mask 24/7," she wrote.

At least all the ladies who are used to selling homes are taking being stuck in their own homes with plenty of good humor.

More like this
Move Over, 'Sunset'! The Drama-Filled Trailer For 'Selling The OC' Is Here
By Nola Ojomu
Christine Quinn’s 'Selling Sunset' Future Is *Finally* Confirmed
By Bustle Staff
One Of 'Selling Sunset's New Cast Members Just Had A Baby With Nick Cannon
By Orla Pentelow and Brad Witter
'Selling Sunset's Jason Oppenheim Has A New Model Girlfriend
By Alyssa Lapid and El Hunt
Get Even More From Bustle — Sign Up For The Newsletter